Curves can be parallel

Straight lines or stretches can be in special positions to each other. This is about "parallel".

These two straight lines are parallel to each other. That means: They have the same distance from one another everywhere.

Two straight lines $$ g $$ and $$ h $$ are parallel to one another if they always have the same distance from one another.

If you draw your parallel lines somewhere in your exercise book, in your imagination they will run parallel to infinity. 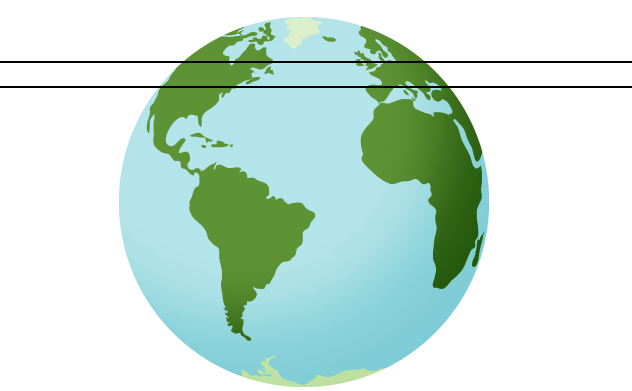 Not only straight lines can be parallel to one another, but also lines.

Draw straight lines parallel to each other

How do you draw parallel lines in your exercise book?

You use the parallel lines of your set square. They are on every set square. In the picture you can see them in.

If you want to draw parallels at a distance of, for example, 2.3 cm, you can also use the set square. Use the little ticks.

Example:
Draw a parallel to the blue line at a distance of 2.3 cm.
You put the set square at the right distance ...

and then draw the.

For the second option, you use the vertical and the distance as an aid. How it works???

1. Place the set square with the center line (90 °) on the straight line. Then you draw the vertical line and mark the required distance. Here it is 2.3 cm.

2. You draw another vertical line at a second, slightly distant point and mark the required distance.

More than a parallel

Most of the time you just need to draw exactly one parallel straight line. Then you can choose which ones to draw.

The length of 8 cm is the highest that your set square has to offer. But there are also tasks in which you should draw a parallel that is more than 8 cm apart. 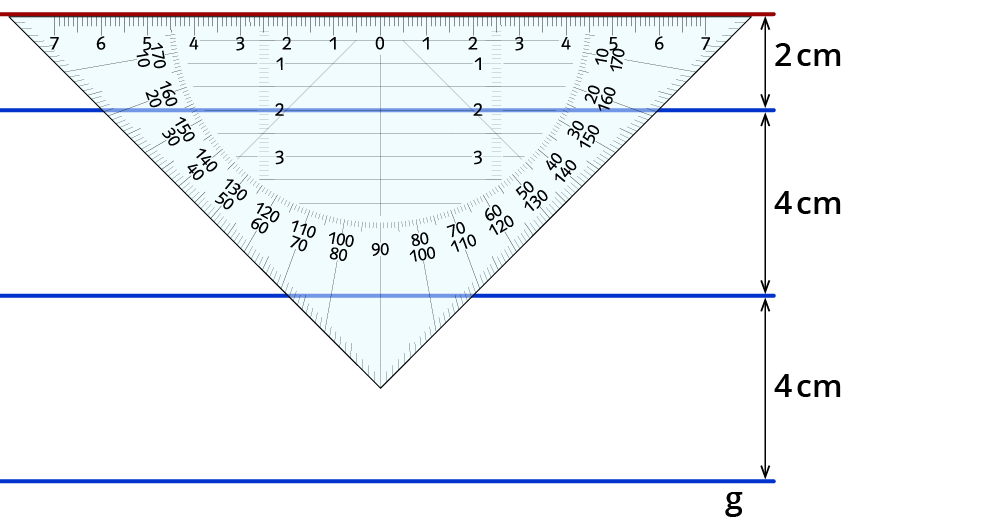 Work with an extension of the vertical. You can use a long ruler to help. Draw very carefully as you extend the vertical.

Draw a parallel straight line through a point

Sometimes you didn't specify the distance, but a point through which the parallel should go.
Then the task is: Draw a parallel to the straight line through the given point P.

Here you have the two options again.

You place the set square on the starting line and move it parallel until you reach the point. Shifting parallel means that you use the lines drawn parallel to each other on the set square.

You draw a vertical line through the point. Then you draw another perpendicular to the first auxiliary line (the first perpendicular). Then that is the parallel.

Straight lines can lie in space in such a way that they never intersect, but are also not parallel. These straight lines are called crooked. This is not possible on the plane, i.e. on paper.

In the plane, straight lines are always either parallel (special case identical) or they have exactly one point of intersection.

If your task is to draw quite distant parallel through a point, you can use a trick. You will need a long ruler for this.

The straight line and a distant point are given. 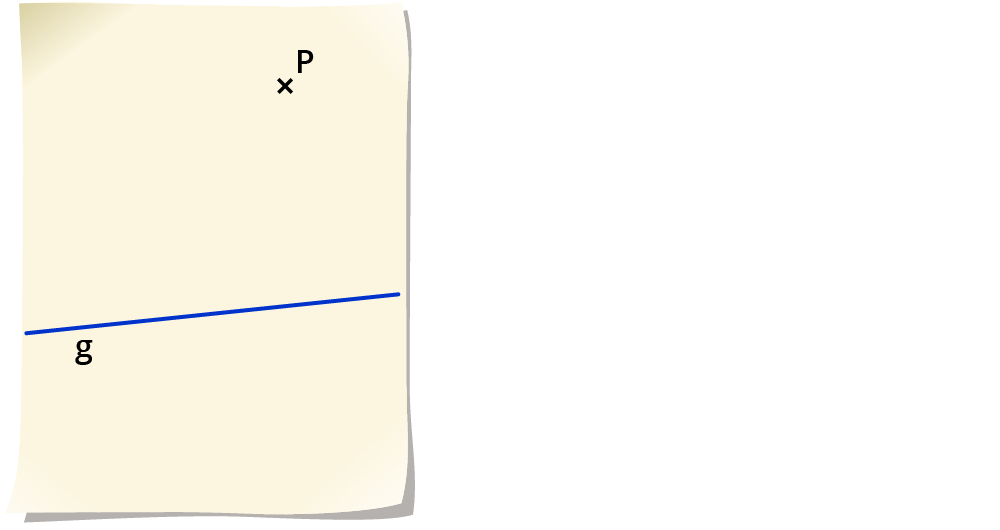 1. You place the set square with the edge on the straight line. 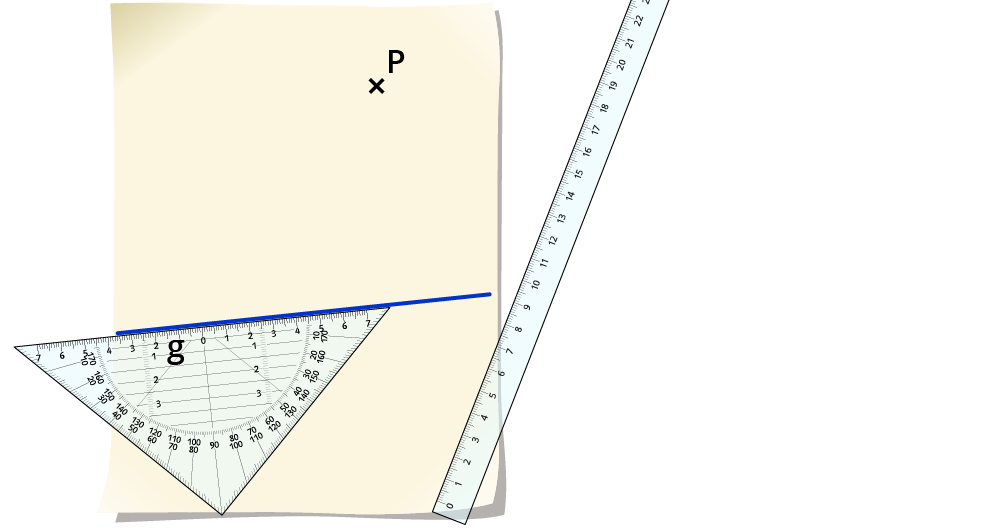 2. You place the long ruler precisely on one leg of the set square. 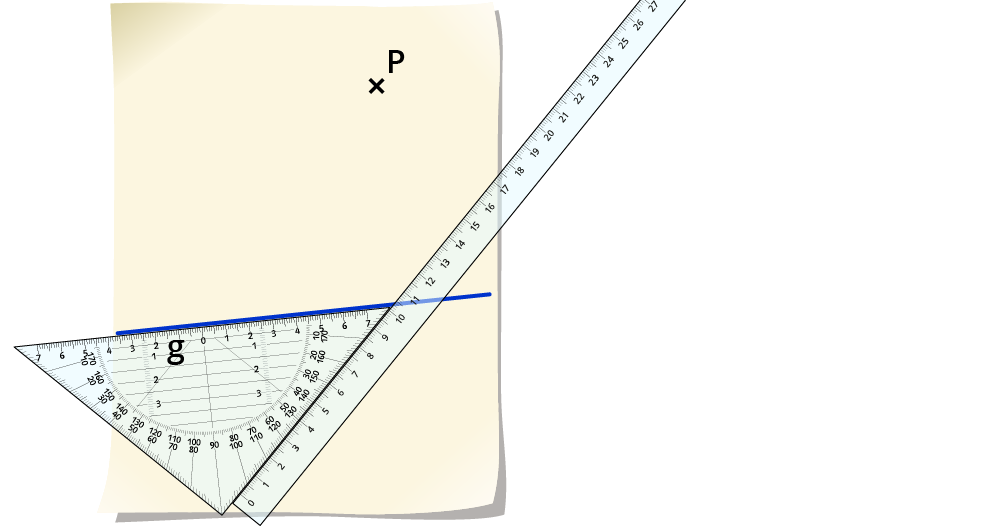 3. You hold the ruler and move the set square to any position parallel to the starting line. 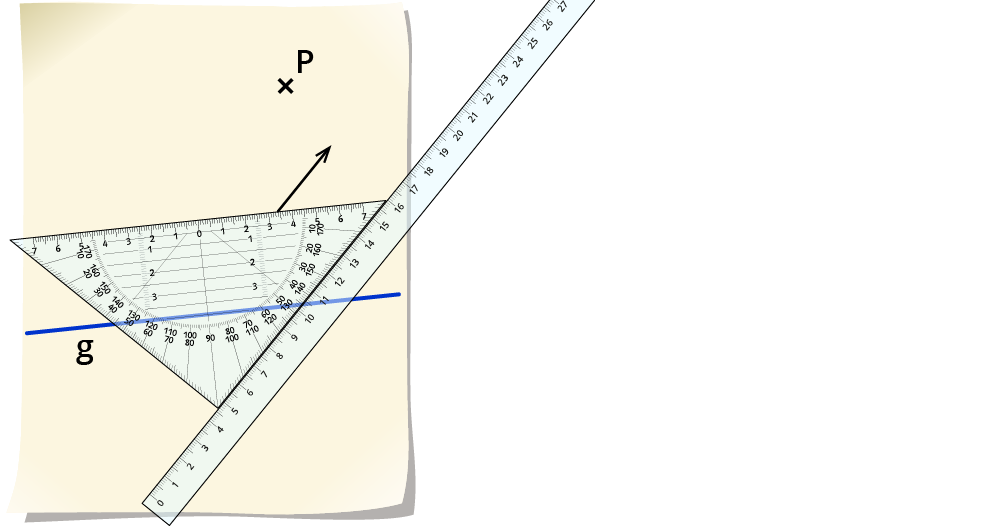 4. You slide until you reach point P. 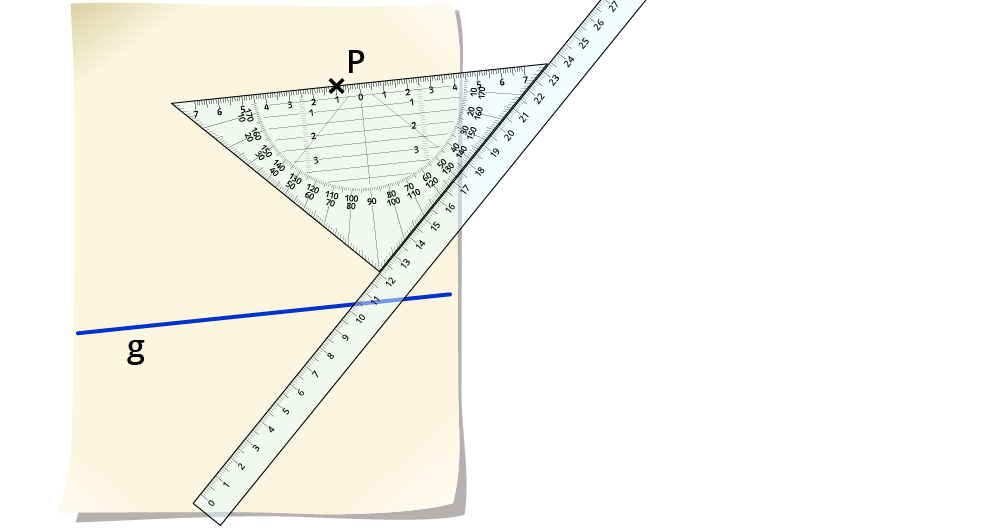 5. Draw the parallel line through P. 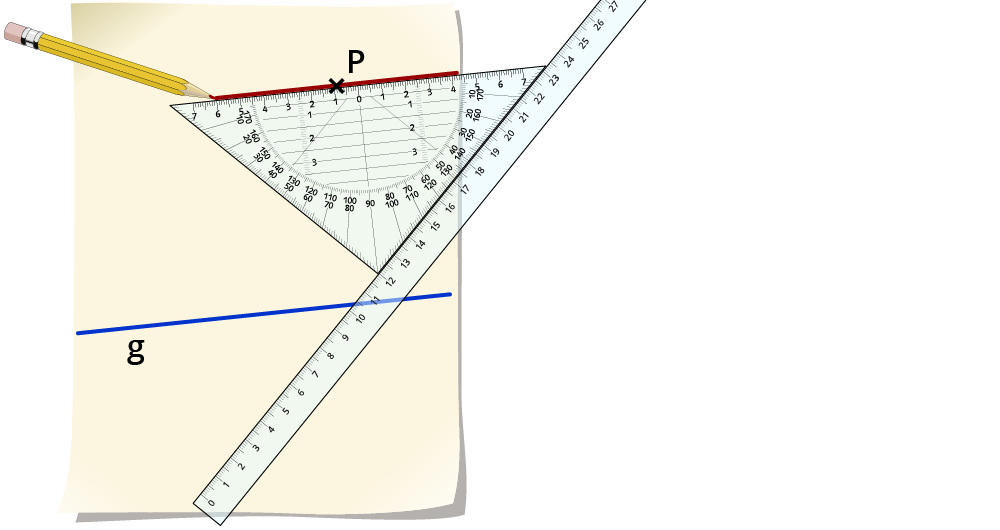 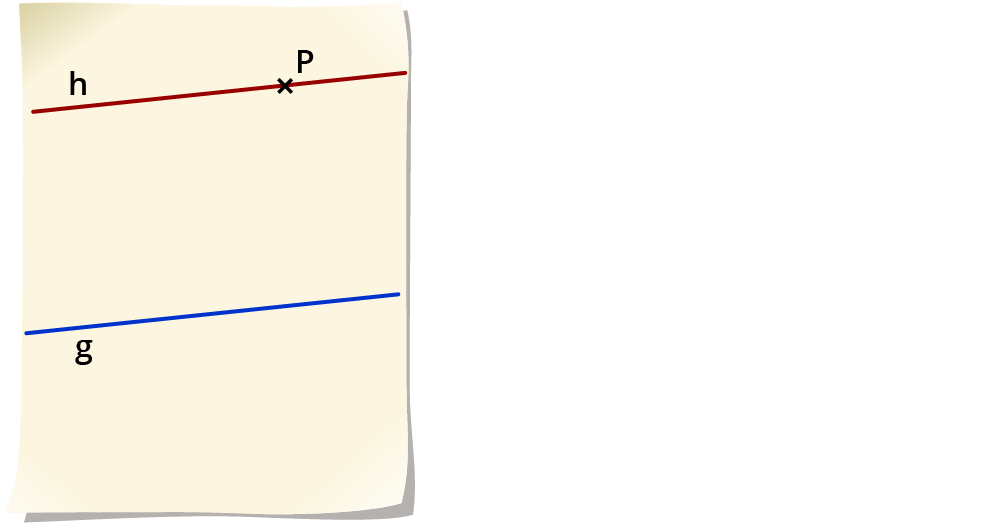 Railway tracks are parallel. Otherwise the train would derail.

What is interesting about the train tracks is that they look to the observer as if they converge at one point at the end of the field of view. But that's just an optical illusion. You know it's not like that. 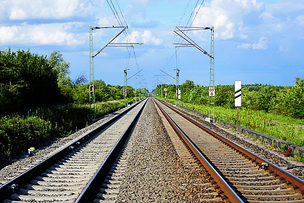 All the lines that strive upwards are parallel to each other.

When you look at the train tracks, it becomes clear to you that curves can also be parallel. But you only need the parallelism of straight lines and lines. And they have no curvature. 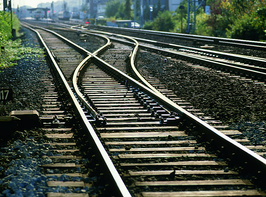 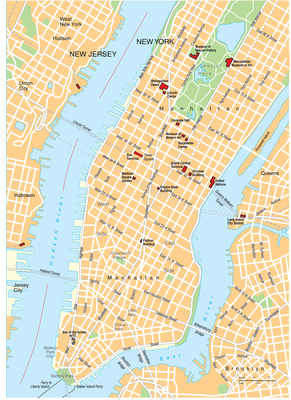 The properties “parallel” and “vertical” play a role in sales and storage. Many goods are in boxes that are cuboid. The cardboard edges are perpendicular or parallel to each other. That is why the boxes are stackable. 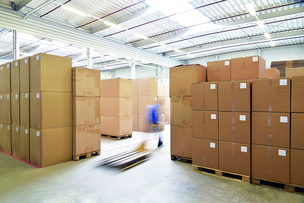 Parallels also occur in bodies. You can find parallel edges in cubes, cuboids or prisms, for example.

All parallel edges are marked in color.

Do you already know the oblique image? This is the name of this type of 3D view. The advantage of oblique images is that the parallel edges are also parallel on the image.