Is it okay to be a little crazy?

Interview with Lutz Dammbeck
"You have to be a little crazy"

From Joachim Fuchsberger to the jungle camp: game shows are a central part of German television culture. Lutz Dammbeck made himself in his film Overgames on the search for the roots of the game shows - and received the documentary film prize of the Goethe-Institut in 2015. An interview.

Dammbeck: I would like to try to answer this in English: “It's a film about the healing of insane by insane and made by crazy people.” You have to be a little crazy to start such a project and with such a large expenditure of time and money to sail into the unknown. In this respect it is an absolute experimental film.

In your film “Overgames” the Germans are referred to as a crazy nation, a patient who needs to be healed. What is your personal diagnosis - how do you see the Germans?

I do think that the "identity problem" that the American psychiatrists analyzed in the fifties and sixties can also be seen in my generation and among my West German peers and artist colleagues when it comes to certain topics. Topics that address national identity and the questions “What is German?” Or “What are we when we say we are Germans?”. Of course, the current situation is not the best for thinking about national identity - that’s something. In this respect, the material that this film reports from 1930 to 1950 provides at least a platform on which one could try to discuss these things.

Her films contain collages from historical archive material, in abundance that one can hardly overlook even as a viewer. How long did you work on the film?

The time frame from the first draft of the script to completion seems very long - almost eight years. But of course there were always breaks: you have to wait for funding, there are breaks in filming, there are breaks in which you try to get archive material. And you need the time with the intensity of the material and the effort that it means to make a selection from 80 hours of archive material. I had to have everything in my head before I could start cutting.

The Goethe-Institut's Documentary Film Prize means that your film will be made available worldwide. The jury is convinced that the film will trigger a variety of intercultural discussions. What questions do you have after the film is finished?

This question remains: How could one manage to lead a discussion about national identity even in difficult times when it comes to "de-state" and "de-border"? I am not convinced of the hope that this problem will be resolved by creating a multicultural, global social order. 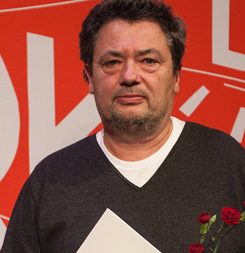 Filmmaker Dammbeck: “In the beginning I had no idea about game shows” | Photo: DOK Leipzig 2015 Your film is made for the big screen. In which direction do you think the documentary is developing in the age of YouTube and streaming on the home laptop?

You have to make sure and fight that these canvases are preserved. This is a hell of a job. I don't really like the new technologies because I think that they “cut off” something, namely our thinking, our feelings, when we hand them over to technical devices and processes that we do not understand. As a result, something comes out of the black box that in a certain way is deprived of its creaturality, its organic form, because it is filtered.

In the beginning I had no idea about game shows because it's not my field of interest. But then I had to deal with it. It reminded me of my childhood: my father was a trainer at the horse race track in Leipzig. At lunchtime they met in the café. There came bank officials, ordinary girls, gamblers and gamblers. It was this strange mixture of circus, professional sport, variety show, and I always liked that as a child. I found all of that a bit in the game shows. I also have great respect for it, just as you respect artists and circus people, because they know much better than the Skinner and Pavlowe experts where to "press". In the same way, good moderators know exactly how to generate a certain reaction: sadness, joy, happiness, laughter. But of course these professionals don't deal with the “superstructure”, which in turn interests me. This is also reflected in my film: The moderators talk about their own profession, which they understand something about, and they don't cheat either. It's important in documentaries that people don't cheat too much.