How insects stick to walls

For some animals, the earth is basically flat. They effortlessly climb vertical walls, walk upside down on the ceiling and, in extreme cases, can hold their entire body weight on the surface with just a single toe. The gecko family has produced a number of such talented facade climbers.

The secret of the up to forty centimeters long lizards lies, as the German name "Haftzeher" suggests, in the special structure of their feet. Each of them shows almost 500,000 keratin hairs under the microscope. These so-called setae are only one-tenth the thickness of a human hair; densely packed, for example the South Asian Tokee (Gekko gecko) around 5000 of them on a square millimeter.

At the ends, the setae have hundreds of even finer, spatula-shaped structures, the thickness of which, at 200 to 500 nanometers, is in the range of the wavelengths of ultraviolet and blue light: the so-called spatulae. Ultimately, it is they who hold the gecko to the wall - so securely that, as measurements have shown, a weight of one kilopond (ten newtons) per foot has to be used to force it off. The mechanisms underlying this enormous adhesive effect only became clear when scientists examined the biomechanics of individual setae in detail.

To this end, an interdisciplinary team of scientists led by biologists Kellar Autumn from Lewis and Clark College in Portland (Oregon) and Robert J. Full from the University of California in Berkley developed a special microelectromechanical system (MEMS). It can be used to measure the adhesive force of a single hair under different conditions. An aluminum wire is used as the test surface, and the adhesive force is determined via the electrical resistance of a piezoelectric crystal.

The first measurements immediately came as a surprise: if the researchers carefully brought the Seta into contact with the aluminum, it hardly stuck, but could simply be removed again without any significant effort. Apparently the geckos are using a trick that the scientists initially overlooked. The researchers therefore took a closer look at how the lizards put their feet on the bottom. They discovered that the sole of the foot widens shortly after it touched the surface - as if the animal were pressing it a little. The hairs on the toes are apparently pressed onto the surface and pushed a little along it.

When Autumn and his colleagues did the same with the isolated Seta, it was actually a lot harder to loosen the hair. The strongest adhesion occurred when the Seta had slid five micrometers along the surface after pressing; the adhesive force was then around 200 micronewtons - enough to lift an ant. Extrapolated, this results in up to 100 Newtons, which would be necessary to detach a whole gecko foot from the wall. This corresponds roughly to the weight of a full bucket of water - probably more than a gecko leg could withstand. In fact, in the experiment, as already mentioned, a tenth of this force was enough to detach the foot. The reason for the discrepancy is that, under natural conditions, not all hairs come close enough to the surface to achieve the full adhesive effect.

The strength of the bond refutes an old assumption that geckos cling to the ground by means of friction; just six hundredth of the measured force could be explained in this way. The adhesion is also too tight for the hypothesis of small suction cups. In addition, other working groups have already demonstrated that lizard feet even work in a vacuum. Electrostatic attraction forces as a mechanism are also ruled out - as experiments had shown in which the air was ionized with X-rays. Finally, geckos don't use glue; they don't even have glands on their feet to produce such substances.

From their measurements, Full and Autumn deduce an intermolecular interaction that is so weak that other forces normally push them to the edge: the van der Waals bond. It comes about because the electrons in a neutral molecule do not stay in place, but instead flit around steadily. This causes short-term fluctuations in their distribution, so that temporary dipole moments arise, which cause opposite dipole moments in a closely adjacent molecule. If the electron distribution changes again, the oscillations in the two molecules are coupled to one another. The result is an attraction.

While a single van der Waals bond is not difficult to break, the Setae are likely to form innumerable contacts when a gecko presses its foot on the surface. Together they create an adhesive force that, according to the theoretical calculations by Full's team, corresponds to the experimentally determined value for a single Seta.

With such a high degree of adhesion, the question immediately arises of how the lizards manage to get their feet off the wall again - and quickly, because running geckos take around 15 steps per second. Again, detailed observation of the animals provided the answer. Geckos peel their toes off smooth surfaces as if pulling an adhesive film off the surface. This means that only a small part of the setae has to be loosened, and on top of that, the angle between the hairs and the base changes. If it reaches 30 degrees, the connection almost breaks by itself, the researchers found in their experiments.

Inspired by the ingenuity of evolution, the scientists have now started experiments with artificial hairs as a dry adhesive that firmly bonds materials together and, if necessary, allows the contact to be broken again without a trace. Although the tiny dimensions of the Setae are still beyond what is technically feasible, there would certainly be enough applications for such a miracle glue - apart from occasional walks on the ceiling. 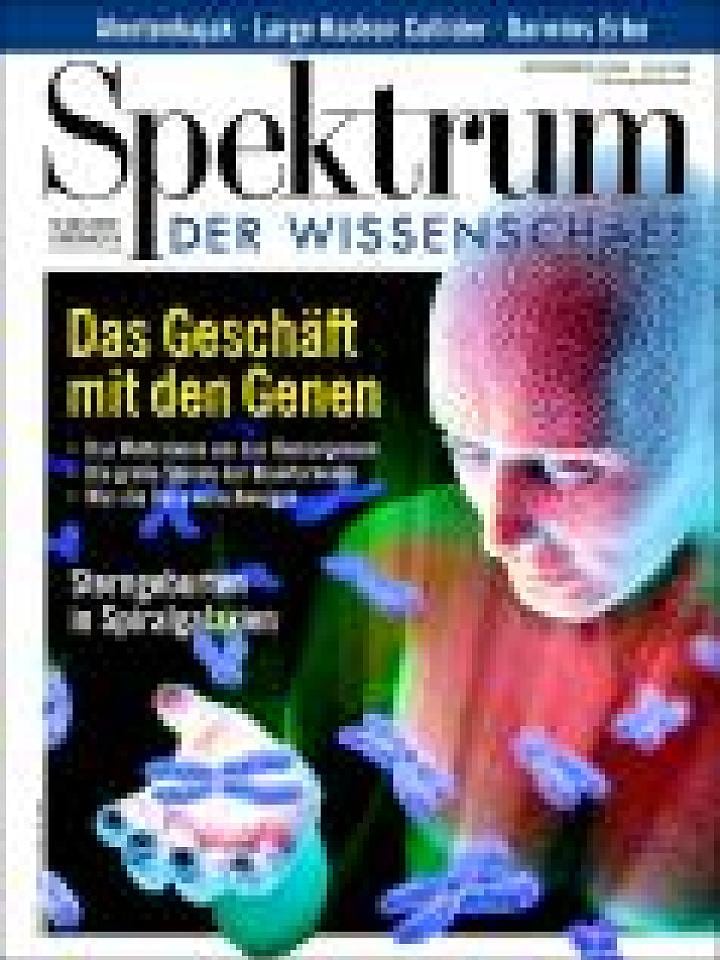 This article is included in Spectrum of Science 9/2000