The finds of stone tools at Perfugas show that sardines had been inhabited since the Paleolithic. It is believed that the first inhabitants who settled in the north of the island (Gallura) came to the island from the Apennine peninsula over a land bridge (Elba, Corsica and Sardinia).
Then other immigrants, who probably came from the Iberian Peninsula via the Balearic Islands, settled in central Sardinia around the lagoon lakes of Cabras and Santa Giusta.
In addition to North African immigrants, groups of immigrants from the Aegean and Anatolia were added.
Thus the population of Sardinia in prehistoric times did not consist of just one people, but of several ethnic groups, of different origins ..........

Regarding the origin of the term "nuraghe" (the; according to Duden foreign dictionary) there are different views. There is agreement that it is not of Indo-European origin. The assumption that it was a coined-Indo-European word creation for the description of its shape of an upturned bucket or truncated cone (nuraxi) is opposed to the view that "nrhg" (nurhag) in Punic meant big house.

In the early Bronze Age the development of a world-wide unique culture begins in Sardinia, which is named after the stone monuments erected at that time.
In its simplest form, the "nuraghi" are frustoconical megalithic structures made of large basalt blocks that resemble the Balearic Tayelots.
In contrast, the "protonuraghen" (corridor uraghen) are characterized by considerable wall masses that enclose one or more corridors and smaller cells. Although researchers have interpreted them as places of worship and / or defense, their actual purpose has not yet been established.
The population, which is heterogeneous due to various waves of immigration, is assumed to be organized in autonomous families, clans and tribes and to consist of an upper class (aristocrats / warriors) and a lower class (shepherds, builders, craftsmen). The so-called "Nuragher", of whom we do not know what they called themselves (as no script has survived), erect huge tombs with the "Tombe dei Giganti" in which they can bury more than a hundred deceased.
The well sanctuaries, some of which are underground, are of particular importance and serve as religious places of worship in addition to above-ground "Antente temples" or "Megaron temples". Nuraghi, tombs and places of worship are only of local importance for a tribe that distinguishes itself from its neighbors.
Due to rivalries between the small, autonomous social units, no larger state unit can develop. 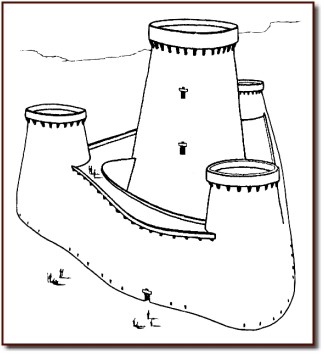 In the Middle Bronze Age, the "Tholosnuraghen" were created with two rooms on top of each other, which are covered with a "false vault" (Tholos) through the protrusion of the stones on the walls.
In a complex form, they consist of a series of (up to a maximum of 5) towers, which are distributed around a simple tower (mastio) and connected to one another by a straight or concave-convex wall (curtain wall).

At the zenith of their power, the Achaeans (Mycenaeans) set up a post in the Gulf of Carlis near Sarrok, on the rock of the Nuraghe Antigori. An exchange of architectural knowledge between Achaeans and "Nuraghi" appears possible.
Together with the Achaeans and Philistines, Sardinians (mercenaries?) Take part in military operations and raids in the eastern Mediterranean.
As "SHARDN" (Shardana) they have entered the Egyptian annals (including the temple wall in Medinet Habu).

The seafaring Phoenicians (Canaanites), originally from today's Middle East, set up trading bases Caralis (Cagliari), Nora, Sulci (Sant'Antioco) and others along the Sardinian coast.
While the Phoenicians bring their writing with them (tablet from Nora), the gradual decline of the "Nuragher" begins, who retreat inland. 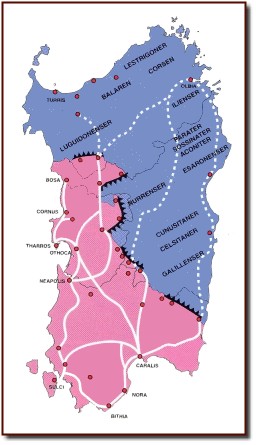 As the Phoenician expansion into the interior of the island continues and becomes more and more threatening for the locals, they attack the Phoenician cities. The Phoenicians then call their Semitic relatives from North Africa, the Punians (Carthaginians) descended from them, for help.

After several campaigns, the Sardinians are defeated by the Carthaginians, who conquer the island except for the impassable mountainous country that will later be called Barbária (Barbagia).

After the Carthaginians were defeated in the First Punic War, Sardinia became a Roman province. The Romans are improving the island's infrastructure in their own interest by expanding the road network and existing cities and establishing new branches. The Sardinians have to work as slaves to the large Roman landowners on extensive latifundia.

In the Second Punic War, in which the Sardinians rise up against Rome on the side of the Carthaginians, they defeated in the Battle of Cornus. 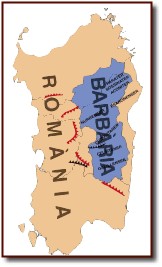 Around 80,000 Sardinians, almost a quarter of the island's population at that time, were deported into slavery on the Italian mainland under Tiberius Gracchius. With the support of their legions, the Romans invade the Barbária, where they bring about the final end of the old "nuragic culture".

Sardus Pater, who goes back to a pre-Roman deity, is represented with a feathered helmet, as we know it from the Philistines. The population is largely Latinized, but individual groups will continue to offer resistance to the Romans from the mountainous interior of the country.

The 694 years of Roman rule are brought to an end by the Vandal who take possession of the Sardinian coastal towns on their way back from a raid in Lazio.