What is more important theology or philosophy

Prof. Göck, what distinguishes theology from other disciplines?
Theology is a science of faith and makes certain metaphysical assumptions, namely that there was a revelation from God that is relevant to man. In the background there is therefore the question of how we can justify the assumptions on which our worldviews are based. This is a question that affects not just theology but all scientific research programs.

How did you come up with this research question?
The motivation comes from my studies in philosophy and theology. During this time I became aware that there are virulent arguments to deny theology its scientific character: For example, natural science has shown that God does not exist, so most of what theology implies is wrong. Suddenly a lot spoke against the fact that what I study makes sense. I wanted to take a closer look at that.

There are certainly people who call theology a waste of taxpayers' money.

The question heats people's minds and the positions are far apart. There are certainly people who call theology a waste of taxpayers' money. It is all the more important that one investigates the scientific nature of theology based on the state of the art of epistemological research - and the individual theological disciplines have promising epistemological reflections.

You work at the Faculty of Catholic Theology. Can you deal with the question openly?
In this project, I don't see myself as a theologian, but as a philosopher and theorist of science who asks himself what science is, and then I look at theology as a case study. I have, of course, a research hypothesis that the arguments against the scientific nature of theology are not convincing. But what matters is the quality of the arguments. If in the last analysis the better arguments speak against my hypothesis, then I would also perceive that as a result.

Can you answer the question with yes or no at the end?
I think you can hardly answer a philosophical question with a definitive yes or no. You can answer with “yes, but” as well as with “no, but”. You find good reasons for both positions that you have to weigh up in the end. There will be no homicide argument for one or the other.

So in the end it is a question of definition.
I would like to answer “no, but”. In a certain way, we can define what we want. There are thinkers like the late philosopher Paul Feyerabend - the enfant terrible of the theory of science - for whom everything is science, including astrology and coffee reading, because he does not assume that there is a clear line of demarcation between science and pseudo-science.

In the philosophy of science itself there is an ongoing debate about what science actually is. In the project we work with the concept of the research program proposed by Imre Lakatos. In our opinion, this is a good approach to bundle the various definitions of science and to explain similarities and differences between the individual disciplines. 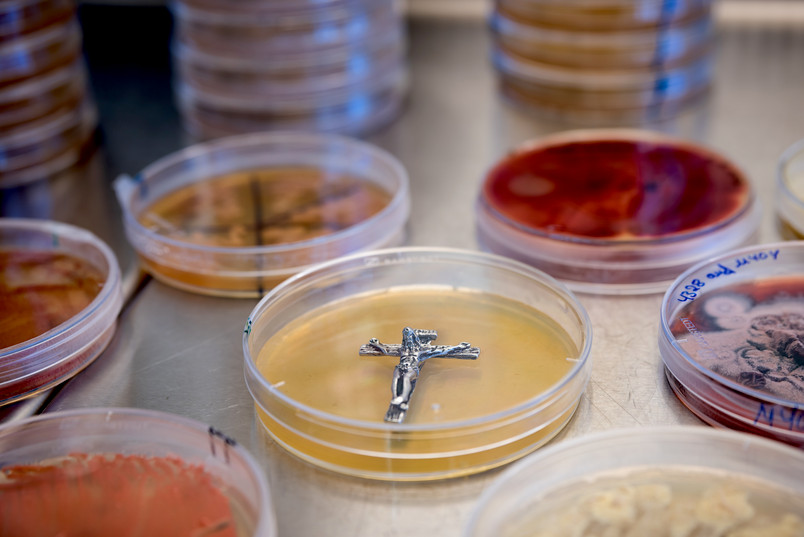 Critics say: Natural science refutes the existence of God, so theology cannot be a science because the object of research does not even exist. Bochum philosophers refute this argument.
© Roberto Schirdewahn

Isn't it unsatisfactory not being able to find a definitive answer to the question?
I don't think so. In other sciences there are no absolute answers either, research results often contradict each other or are revised after a few decades. The old model that you can read nature easily and without problems is no longer represented today. What you observe depends, for example, on the terms you bring with you. If you do a double slit experiment and you don't know the concept of the electron, you won't see anything amazing.

This is how you can enter into a dialogue with other people.

With our research, we give reasons to hold a certain point of view. In my opinion, that has already done a lot. Because then you can enter into a dialogue with other people.

The selected images are downloaded as a ZIP file.
You will find picture lines and picture credits after unpacking in the included HTML file.
<?