Counter stupid sayings? Not everyone is quick-witted. Often the right saying comes to mind hours later. How nice it would be if you could become more quick-witted ... The good news: You can. Quick wit can be learned! We show you how a clever counterattack works, how you can easily parry verbal attacks - with practical tips, examples and quick-witted answers with which you can practice your repartee ... 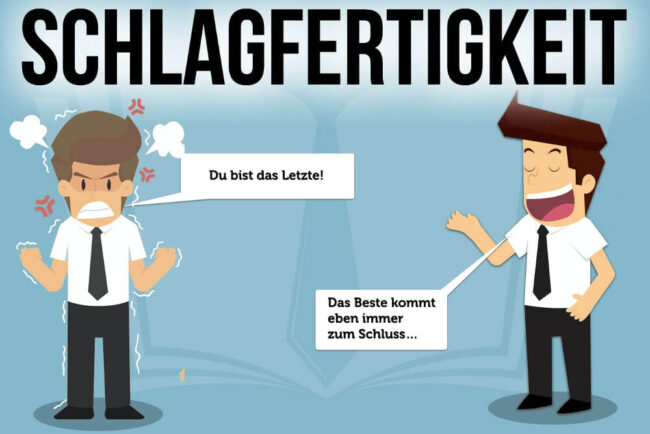 Quick-wittedness is the art of countering spontaneous and agile in an unpleasant situation. It's the ability to quickly come up with a funny or clever answer. At its core, repartee is about immediately delivering the right response to an unexpected statement or question. If you are quick-witted, you stop verbal attacks and take the wind out of the sails of the attacker. This is in a bad light, while you appear confident and self-assured.

Common synonyms for quick-wittedness are eloquence or shrewdness. However, neither does the meaning of quick-wittedness. The idioms: “always have a suitable answer ready” and “don't fall on your mouth” are much better.

Learning to be quick witted: is that even possible?

Some people are naturally quick-witted. They always have a relaxed saying on their lips, counter any comment as they please and know exactly what to say at what moment. Others find it difficult and spend a long time looking for a suitable answer. But it doesn't have to stay that way. Anyone can learn to be quick witted. The largest possible, active vocabulary is an important prerequisite for this. A clever counterattack lives from a clever language game, from sharp puns - from the "top". So read a lot, talk a lot, and practice, practice, practice playing with words.

How does repartee work?

In addition, quick-wittedness is made up of three factors, all of which are necessary if you want to be quick-witted and want to answer faster:

Repartee Examples: Here's How You Can Respond

Quick-wittedness is often difficult, especially at the beginning. It can help here if you come up with a few quick-witted answers and sayings that practically always fit and work. By memorizing these, you will at least gain more confidence and will be able to get rid of them over time. Because, of course, such quick-witted sayings are never as "powerful" as your own original saying and counterattack.

In the following you will find some classics with which you can quickly answer almost any saying. The "quick-wittedness coach" Matthias Pöhm also calls them "trigger sentences":

The counterattack lives from the surprise

Overall, practice being more offensive. Anyone who is afraid of saying the wrong thing will never be quick-witted. Journalist John Wilkes is a good role model for this. When Lord Sandwich, namesake of the folding bread of the same name, said to him: "One day you will either die of syphilis or on the gallows", Wilkes only said: "That depends on whether I adopt the mistress or the life principles of your lordship." A counterattack that couldn't be more quick-witted.

Speed ​​also decides when it comes to repartee. The counterattack lives from the surprise. About hitting the other where it hurts. If you come under fire, the moment of shock often puts you on the defensive. Overcoming this rigidity is the hardest lesson in practicing reparteeism. It is only possible through a kind of immune system: See verbal brawls as communication ping-pong. Or as a compliment: after all, someone is paying so much attention to you that they have chosen you as their target. And who sets themselves small goals? Just.

6 tips on how to practice reparteeism

Would you like to be more quick-witted? Then the following tips and exercises can help you:

In addition to the tips, there are also some tried and tested tactics for being more quick-witted. You can use these in a wide variety of situations, but especially in the job they are particularly good for finding quick-witted answers. For a better understanding, we will introduce you to the individual strategies, give you a specific situation as an example and show you what the quick-witted answer might look like in the case.

This tactic can actually always be used. You play the ball straight back to your counterpart and ask a question that is as unpleasant as possible, to which the other has to find an answer.

Colleague: "But you gained weight while on vacation."

You: Yes, it can be. How was your vacation? Apparently the food wasn't that good.

With the help of this tactic you turn the tables and expose your counterpart. Usually this reaction is very entertaining for everyone else. But be careful: you will quickly make enemies and should expect a return coach.

Winston Churchill was famous for his quick wittedness. At an evening party, a certain Lady Astor is said to have said to him: "If I were your wife, I would put poison in your coffee." To which Churchill replied:

And if I were your man I would drink him.

Instead of defending yourself, just agree with your attacker. In this way, accusations and provocations come to nothing.

The SPD chairman Sigmar Gabriel was asked at the federal press conference after the coalition agreement had been signed how he felt that he and Alexander Dobrindt were now part of a cabinet. Dobrindt described Gabriel as "overweight and incapable". Gabriel replied calmly:

At least in half he is right. Which one depends on the weight class of the observer.

This tactic is based on incapacitating the colleague with ironic praise. Pay an exaggerated compliment that ironically illustrates how stupid the remark actually was.

During a presentation, what you said is said to be "superfluous". They counter (ironically):

A great throw-in. May I write it down?
Compliment! I would not have believed you would have made this witty remark.
Thank you for the help in life. Could you repeat that, please?

With this tactic you “translate” the words of the other person - in a way that was of course not intended by them. In doing so, you are turning the statement to your advantage.

Your colleague reports to you. "You are only a puppet of the boss!" To which you answer:

Do you mean that it takes a lot of instinct to guide me?

With this tactic, you do not go into the content of the allegation at all, but make it the subject of how currently people are talking to each other. Bring up the unobjective nature of communication. Isolate your counterpart with his statement.

In a meeting you are criticized by your colleague for only having foolish ideas. Your answer to that:

Unobjective remarks like this get us nowhere. We are all interested in arriving at a result as quickly as possible. I ask you to remember the correct manners.

Advantages: What does reparteeism bring me?

From a very practical point of view, quick-wittedness helps to find the right words in difficult or uncomfortable situations. The benefits don't stop there. It pays to work on your own quick wittedness. What will improve for you as a result:

Quick wit on the job can also be dangerous

Quick-wittedness is well received in many situations, makes for some smirking or appreciative looks. But - and that's a big BUT: In the job and in the office, different rules apply than in a heated debate. With the latter, the robust replica has to be quick, precise and painful in order for it to be fully effective. This is risky at work: cheek often only brings a Pyrrhic victory here. Anyone who tries to silence others is more likely to provoke a desire for revenge.

Or worse: Thanks to the punch line, the original accusation is even more firmly established in the minds of those present. Office rhetoric is therefore never combat rhetoric, rather it should demonstrate one's own sovereignty and end an unpleasant topic. In the job, a little caution is required when it comes to reparteeism and there are some basic rules that even quick-witted answers must adhere to in order to avoid negative consequences:

Tips on how to hit the right note on the job

The following tips and techniques will help you show quick wit and still hit the right note.

The art of eristics as self-defense

If you are advanced in these techniques and you have to deal with a really nasty dog, you are welcome to practice the art of eristics. This is the evil stepsister of rhetoric, which is no longer just about parrying an attack or putting the best argument in the foreground, but about winning an argument by all mean means. The aim is to outsmart, ridicule and discredit the opponent - although he may even be right or the better arguments.

However, that really doesn't belong in the office and serves as the last step in self-defense. Knowing their techniques is still advisable - even if only to parry really mean attacks.