What is special about the Orion constellation

From the Greco-Roman world of legends

In Greek mythology, Orion was a warrior who boasted that he could kill any living animal. Gäa, the earth goddess, wanted to prevent this and sent a scorpion to kill Orion.

This story can be seen in the sky: If the scorpion rises in the east, Orion 'falls', hit in the west and disappears. But Orion is resurrected by the god of salvation, Aesculapius, and so the reverse can also be seen: Scorpio is chased away by Aesculapius and sets in the west, while Orion rises again in the east.

This is possible because both constellations face each other in the sky. If one rises above the horizon, the other disappears below the opposite horizon.

Looking east on a winter evening 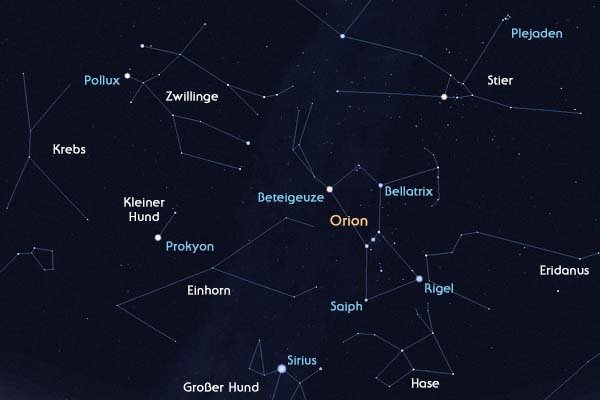 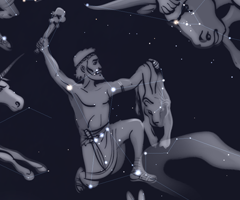 If you look at the sky on a winter evening, you immediately notice a striking constellation of stars in the form of a large X - that's Orion!

Orion, also known as the sky hunter, is made up of many bright stars. His 3 'belt stars' in the middle are nicely lined up in a line, the two 'shoulders' shine brightly, as well as his 'knees'. Under the belt, a few stars and foggy star clusters are arranged in such a way that it looks like Orion has a sword at this point.

Orion is one of the most striking and popular constellations and a typical winter constellation. Orion uses a telescope to reveal a few very special pieces of jewelry. In this region there are particularly many and colorful gas nebulae and star formation areas. The best known are the Orion Nebula M42 and the Little Orion Nebula M43. We find them below the three belt stars in the area of ​​the sword. 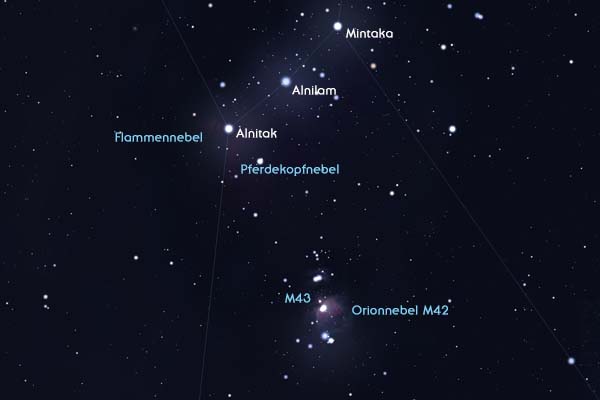 M42 can already be seen with the naked eyes as a washed-out spot in the sky. With a telescope we can see nebulae and young blue stars that have only just been formed by cosmic standards. The area is 1,350 light years away from us. 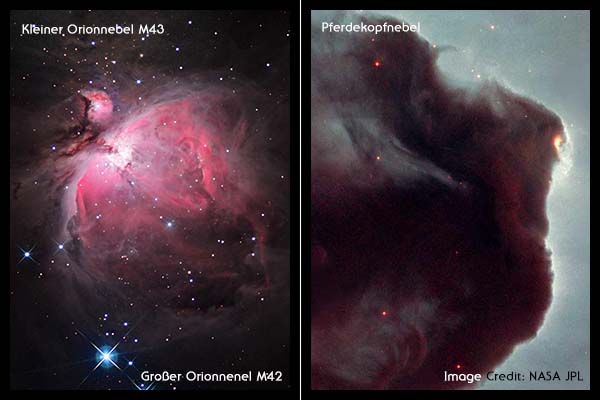 Also in the area of ​​the belt stars we find gas nebulae, near the left star the Horsehead Nebula and the Flame Nebula. The Horsehead Nebula is a dark cloud that spreads in front of a lighter nebula and can only be seen well through the contrast. The whole thing takes place at a distance of 1500 light years.

The stars of Orion

All Orion-X stars have proper names. The left shoulder star is called Betelgeuse and glows red. It is a supergiant and about 630 times larger than the sun. If it were in the place of the sun, it would extend to Mars orbit!

Betelgeuse is at the end of his life. It could even explode soon and become a supernova! Fortunately, it is about 400 light years away from us.

Bellatrix, the right shoulder star, is a bluish giant star 243 light years away. The star will evolve into a red giant over the next 100 million years.

At the bottom right is Rigel, a blue and white supergiant and the brightest star in Orion. Rigel is very young, less than 100 million years old. In cosmic terms that is little! Rigel is significantly heavier than the sun, which means that it has a much shorter life expectancy. Its fuel will soon run out, then it will change and become a red supergiant.

Where in the sky is Orion to be found? 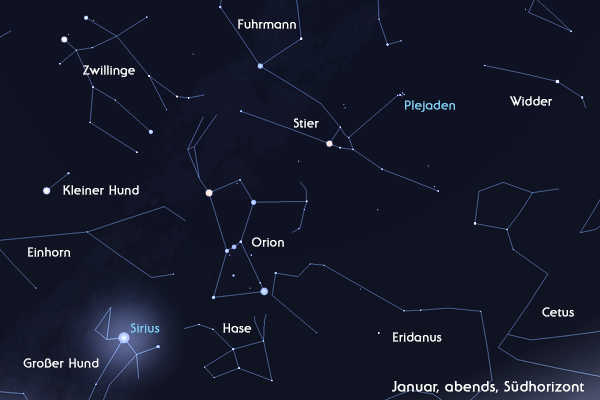 Orion accompanies us through the whole winter and is THE typical winter constellation. At the beginning of winter we find it in the east in the evening, where it is just rising and still occupying a semi-recumbent position. Exactly on New Year's Eve, when we greet the New Year with fireworks, Orion stands upright in the south and has its highest point above the horizon.

Right across from it in the north, the Big Dipper performs a daring feat, because it stands vertically on its drawbar! As spring approaches, we find Orion to the west leaning to one side and going down soon after.

Many other beautiful constellations with strikingly bright stars are grouped around it. They are carter and bull, big dog and small dog, rabbit and twins. Orion, with its star Rigel, is part of the winter hexagon.

The graphics on this page were created with the help of the planetarium software Stellarium. This planetarium for the home PC can be downloaded and used free of charge.