Is almond milk good for teenagers

Milk is good for children. But there is no need to have too much cow's milk. Vegan plant milk such as almond milk, soy milk, rice milk and oat milk also tastes good and can be used in cooking, baking and coffee. 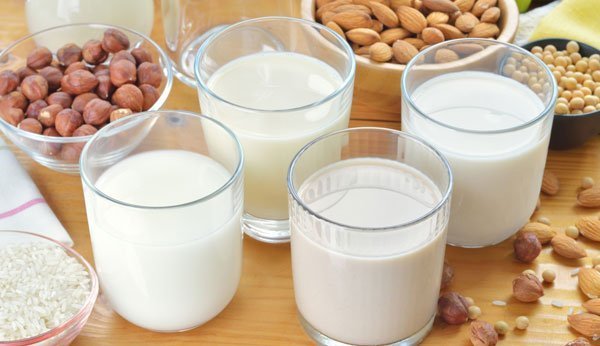 There are some vegan alternatives to cow's milk such as almond milk and Co. Photo: Geo-grafika, iStock, Thinkstock

Children need milk. The Swiss Society for Nutrition (SGE) considers animal products to be indispensable for a healthy diet for children. She recommends three to four servings of milk or dairy products.

That's how much milk children need

Many parents follow the recommendations of the SGE, but they do not want to serve their children more milk than necessary. Pictures of factory farming quickly spoil your appetite not only for meat, but also for an excess of milk. Milk intolerance and allergies also make you think about milk alternatives such as almond milk, soy milk, rice milk and oat milk.

In addition, not only meat production, but also the keeping of dairy cows harms the climate. The dairy industry harms the climate with its immense methane and CO2 emissions, the consumption of disproportionately large amounts of water and the cultivation of soy as feed in huge monocultures like hardly any other branch of the economy, informs Greenpeace Switzerland. "Switzerland, with its idyllic cow pastures, has to be aware that its favorite food is responsible for huge CO2 emissions, which unfortunately are all too often suppressed in the statistics."

Almond milk, soy milk, rice milk and oat milk are called milk, but strictly speaking it is not because it does not flow out of the udder. That is why they are usually called «drinks». The prices in the supermarkets and organic markets fluctuate - depending on the provider, but tend to be higher than for cow's milk. You have to find out what tastes good.

The drinks made from pureed soybeans, which taste strongly of grain, can now even be found at discount stores. Not everyone likes to drink it pure. They are available in different flavors, including cocoa and vanilla drinks. Whoever accesses here should pay attention to the sugar content. Soy milk can be used like cow's milk for cooking and baking, which is especially good for people who cannot tolerate gluten and lactose. Pollen allergy sufferers should, however, approach soy milk carefully, because many of them are also allergic to soy protein.

Compared to cow's milk, soy milk contains about the same amount of fat, but more valuable unsaturated fatty acids. Soy milk is a generous donor of folic acid, which women need especially in early pregnancy. However, the calcium content of soy milk is lower, which is why some soy drinks are fortified with calcium. Vitamin B12 - as found in cow's milk - is missing. If you want to be sure when buying that the soy milk is not genetically modified, you should follow the advice of the World Wide Fund for Nature (WWF) to use organic products. Labels such as “ProTerra” and RTRS “Round Table for Sustainable Soy” help with orientation.

Cereal milk such as oat milk, rice milk, rye milk or spelled milk taste sweeter than soy milk because the cereal starch turns into sugar during production. The grain taste is particularly strong in oat milk. Cakes and puddings also taste good with oat milk, rice milk, rye milk or spelled milk. However, with the exception of rice milk, grain milk cannot be foamed well because it is relatively thin. Grain milk contains protein, minerals and vitamins. Overall, however, the nutrient content is rather low. If you have gluten intolerance, you can use rice milk and corn milk. All types of cereal milk are edible for people with lactose intolerance.

Almond milk, which contains neither gluten nor lactose, tastes deliciously nutty, but is a bit thin. It consists of almonds, water, salt and sweeteners such as agave syrup or stevia. Because of the additives, it can hide some calories. Like cereal milk, almond milk is low in nutrients. But it is well suited for cooking, in the mix of drinks, also tastes good in muesli and pudding, in creams and cakes.