Your body can digest quinoa

The small all-rounders quinoa are a very popular staple food in their native South America. But even in this country they have meanwhile sneaked into almost every pantry.

Since they are not only convincing in terms of taste but also in terms of their nutrients, they are particularly popular with vegetarians and vegans.

Quinoa can be used as an alternative food and under certain circumstances as anSuperfood be seen. This group includes foods that have special and above all positive effects on health and the body. Quinoa should always be included due to its optimal nutrient density.

What you should know about quinoa!

From a botanical point of view, quinoa, also known as quinoa, belongs to the foxtail family and is related to the vegetables spinach and chard. These are small grains that have their home in South America. Especially in Bolivia, Chile, Argentina, Colombia, Ecuador, and Peru. The first use in human nutrition dates back to the ancient Aztec empire.

Of course, the Incas and Mayans also used the small, special grains as a staple food. Supplying the body with all important nutrients, vitamins and minerals plays an important role here. 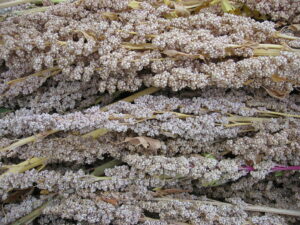 The first import into other countries was recorded in the USA in 1907. Since then, quinoa has enjoyed increasing popularity all over the world.

In addition to the main growing areas of Peru, Ecuador and Bolivia, the seeds are now also grown in the USA and parts of Europe.

The appearance of the plant varies in terms of height, color, inflorescence, number of seeds and size of seeds. Depending on the degree of ripeness, the green plant has red or yellow leaves. The grains of the plant are about 2 mm in size. They can also be colored differently.

White, light-translucent, yellowish-brown, reddish or even black are possible. In the trade, beige or white-yellow seeds are usually offered. However, some of the dark quinoa grains are mixed in with these. In Germany, quinoa is available all year round and has a slightly nutty taste.

For this reason, the grains can be used in a variety of ways in nutrition and added to numerous foods and dishes. The vegetables add value to every meal and can be used as a wholesome staple food with regard to the alternative diet (vegans, vegetarians).

In addition to the numerous ingredients, quinoa has a very positive effect on health and the body after consumption. Therefore, the small grains are also considered a small miracle cure in natural medicine.

The composition of the ingredients (nutrients, vitamins and minerals) in quinoa is truly unique. Protein and essential amino acids play a major role in this. These are involved, for example, in the structure of cells and take on important functions of organs and muscles. 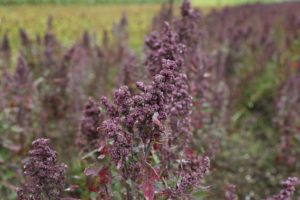 With regard to the high protein content, quinoa is seen as a substitute for meat and is playing an increasingly important role in terms of alternative diets.

One of the most important amino acids found in seeds is lysine. Lysine prevents some enzymes in the body from destroying cells and repairs damaged connective tissue. Therefore, quinoa is considered a real natural remedy in cancer prevention.

With the carbohydrates it contains, an optimal supply of energy is guaranteed. This ensures that all important organs in the body receive enough fuel for their work and function.

But quinoa has many other positive effects on the body. Consumption can also stop inflammatory or allergic processes, for example. The seeds are therefore also suitable for preventing atherosclerosis and as a grain substitute in the gluten-free diet. Since the quinoa contains a larger amount of calcium, people with a lactose intolerance can use the small grains as an alternative to milk and dairy products.

The seeds also contain the important mineral magnesium. This prevents vasoconstriction in the body and can therefore be used in the treatment of headaches, migraines and clogged arteries. The omega-3 fatty acids contained in it lower the cholesterol level and have a positive effect on the cardiovascular system.

The granules can also provide health benefits for digestion. Valuable dietary fibers serve as bulking agents in the body, stimulate digestion and transport toxins and waste materials out of the body via the intestines. Due to the high water-binding capacity, the feeling of satiety is more likely to come into force in the stomach. Quinoa therefore also plays a major role in losing weight and treating severe obesity.

The metabolism is also positively influenced when the seeds are consumed. Vitamins, minerals, trace elements and unsaturated fatty acids are responsible for this. These stimulate digestion and metabolism and thus ensure a good sense of well-being.

The antioxidants in quinoa catch the so-called free radicals in the body and thus slow down the aging process in the body. They also prevent serious illnesses.

Quarantine also contains substances such as manganese and copper, which are responsible for building and maintaining muscles, bones and blood vessels. The energy metabolism of the cells is also positively influenced by vitamin B12. In general it can be said that the numerous ingredients give the body strength and vitality as well as strengthen the body's own defense system.

Quinoa effects at a glance

Overview of the positive effects of quinoa on the body:

Quinoa is an important supplier of protein and essential amino acids. The body cannot produce essential amino acids itself, so they have to be ingested through food. In addition, quinoa contains various minerals, nutrients and vitamins, all of which perform important tasks in the body. Due to its high nutrient density, quinoa should always be an important part of a healthy and varied diet.

Overview of the nutritional values ​​with quantities (based on 100 g quinoa):

The information relates to 100 g of the unprocessed food. When cooked, 100 g quinoa has less nutritional values ​​because the seeds have absorbed water, which adds weight.

Overview of vitamins and minerals:

About a third of the recommended daily amount of magnesium, iron and manganese is covered by 100 g of quinoa. 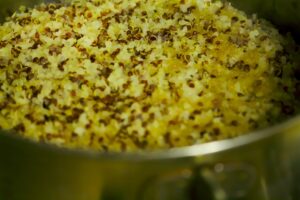 Intolerance and allergies when consuming quinoa

Tips on shopping and using in the kitchen

The edible part of the plant is not just limited to the seeds. The leaves can also be used in the kitchen and are considered a real delicacy by lovers. Before preparing the seeds, they should be rinsed under running water.

The useful small seeds are available in almost every organic market and now even in some supermarkets. Quinoa is also an important representative of the product range in health food stores. However, there are a few important points to consider when buying seeds. In any case, it should be rice from controlled / organic cultivation. These were not exposed to any harmful loads or pollutants before and after the harvest.

Quinoa should be stored in a cool place protected from light and air. Longer storage is not recommended as the product can quickly become rancid. This also applies to so-called quinoa flour. This has a high proportion of unsaturated fatty acids, which oxidize quickly. In addition, storage in a closed container is recommended, as this prevents pests (e.g. from flour moths).

Quinoa can usually be consumed raw or cooked. There are many different uses in the kitchen. Quail rice is suitable, for example, as a delicious breakfast cereal that is combined with delicious fruit. In addition, the grains enhance any dish and enrich a colorful vegetable salad. 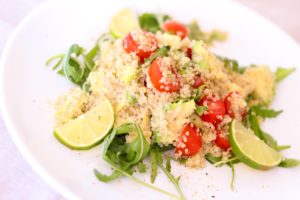 Quinoa can also be cooked and consumed as a nutrient, similar to rice. To do this, the granules should be briefly boiled in twice the amount of water. Then simmer gently for about ten minutes, then remove from the heat and let it soak for another 15 minutes, covered.

If quinoa is cooked too long, it becomes soft and loses its special taste. If properly prepared, it should be slightly nutty.

Another preparation option is to briefly toast the small seeds in a little olive oil. The special aroma should only develop properly. Combined with high-quality butter or linseed oil as well as sea or rock salt, the roasted quinoa seeds taste really delicious. Broccoli or avocado are ideal as a vegetable side dish.

If you want to prepare a delicious quinoa salad, you can use the seeds cold. Other ingredients of the salad can be tomatoes, onions, linseed oil, lemon juice and herbal salt. Quinoa is also suitable as a filling side dish for meat or fish. If the seeds are prepared for patties, for example, the eye also eats. There are also many delicious casserole recipes that use quinoa as the main ingredient.

Quinoa flour can also be used to conjure up many delicious dishes. For example pancakes, cakes and pastries. The leaves of the quinoa plant can be used in soups, for example. Whether savory or sweet, quinoa can be used almost anywhere and gives dishes a special touch.

Here you will find answers to frequently asked questions about quinoa.

Can Quinoa Help You Lose Weight?

Yes, because due to its low calorie content and valuable fiber, quinoa is quite suitable as a "weight killer". Almond rice is a food that provides few calories, but a lot of important nutrients, vitamins and minerals.

The fiber it contains ensures that you feel full at an early stage and thus reduces the size of daily meals. Anyone who uses quinoa as a staple food for weight loss will quickly be able to count on a weight loss success. Without having to forego the intake of important substances.

Yes! Quinoa is gluten-free and is therefore suitable as a grain substitute for people with celiac disease (gluten intolerance).

How can I avoid the quinoa tasting bitter? 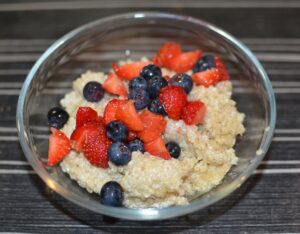 If quinoa tastes bitter, it still contains remnants of the peel. These can be removed by washing the seeds thoroughly before preparing them. We recommend using a sieve and running water. After washing, the remains of the peel should be removed and the quinoa should no longer taste bitter.

Is quinoa consumed raw or cooked?

Quinoa can be consumed both raw and cooked. This depends on the respective use. Raw seeds enhance food (e.g. salads, muesli) while cooked quinoa serves as a staple food (similar to rice).

Can the quinoa seeds also be eaten with their peel?

The seeds can certainly be consumed with their husks on, but the body cannot derive any health benefits from them. The shell of the seeds is indigestible for us, that is, if the seeds are eaten with the shell, they are excreted undigested. So that the body can absorb the nutrients in the seeds, they should only be consumed in the peeled state.

Can I also make quinoa flour myself, as it is usually expensive in stores?

Yes, with the help of a device that is suitable for grinding food. Alternatively, a coffee grinder can also be used.

Our conclusion on quinoa

Quinoa has more than earned its name as a “superfood”. It has a very good ratio of nutrients, minerals and vitamins and also impresses with its ease of use in the kitchen and its light taste. Quarried rice is considered an effective natural remedy in his homeland and confirms this with its positive effects on health. In the alternative forms of nutrition (vegetarianism, veganism), quinoa is a popular meat substitute and can also be used in a gluten-free diet.
Please recommend this page or link us:
<?