Remix OS: How Good is Android on PC?

Users can not only use the mobile operating system Android on their smartphone or tablet, with Remix OS there is also a free representative for the desktop PC.

Android is mainly used on cell phones, but with Remix OS, the Google operating system can also be made to run on a home computer or laptop in a modified form. The provider offers interested parties the free download of Remix OS on its website [link removed]. But for whom is the desktop Android worthwhile? In our field report we go into the strengths and weaknesses. 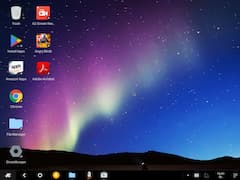 The Remix OS desktop interface
Image: teltarif / Screenshot The provider provides Remix OS in two versions. While the download size of the 32-bit version is relatively small at 550 MB, users with 64-bit systems have to plan in just under 820 MB. The download file is delivered in zip format and must then be unpacked. In addition to an ISO file, there is also a tool for installation in the directory (Remix_OS_for_PC_Installation_Tool _...). This can be used to import the OS without first having to be copied to a data carrier. Basically, users can choose between local installation on the hard drive and temporary use in the form of a live USB stick. Using a DVD to create a live data carrier is not recommended, otherwise the performance will be very mediocre. After all, access to the files you need depends on the read speed of the DVD drive. Problems can also arise when installing additional apps, as these are temporarily stored in the PC's RAM. As soon as this reaches its capacity limit, no further applications can be installed.

If the user opts for the live USB stick, the ISO file is copied to a USB stick. The Remix-OS-for-PC-Installation-Tool, which is supplied in the zip archive of Remix-OS, can be used for this. However, there are quite a few requirements when using a USB stick: It should be at least 8 GB in size, bring USB 3.0 support and be formatted in FAT32 format. After the user has selected the USB slot as the boot drive in the BIOS, a note on Remix OS appears instead of the usual Windows boot process. Here the user opts for the so-called guest mode. No data is written to the hard drive, which is why you can use your conventional Windows operating system without problems after a restart.

Alternatively, users can install Remix OS on the PC's hard drive. The Remix OS for PC installation tool mentioned above is used for this. Here the user can specify how much space on the HDD is reserved for Remix OS and on which partition the installation should take place. We have chosen the recommended 32 GB here. A restart is then initiated and part of the hard disk is formatted. Finally the new files are copied to the PC. Remix OS can be operated in dual boot mode, so the Android OS can be used alternately with Windows 10. When the system starts, the user can choose between the two operating systems.

Initial setup & use of the Google Play Store 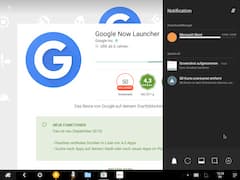 Notifications are displayed in the right sidebar
Image: teltarif / Screenshot After the setup process has been completed and the system has booted, the initial setup is done. First, the user is asked for the system language and the desired keyboard layout. While you can only choose between English and Chinese for the system language, a German version is also available for the keyboard layout. Incidentally, the German language package can easily be added later via the system settings of Remix OS. Speaking of the language package: Despite translations, some of the submenus are still in English.

After the user has landed on the Remix OS desktop for the first time, it is worth installing the "GMS Activator.apk", which users can download here. This is a small piece of software that enables the installation of the Google services that are used in many apps. After the successful setup, users should restart. The user can easily install the Google Play Installer via the so-called Remix Central app, which can be opened via the start menu. Then continue with the login to the Google Play Store. The user can use his conventional Google account information for this. Any apps can then be downloaded to the PC. New apps then land on the start screen and in the start menu and can be started by double-clicking on the respective icon. 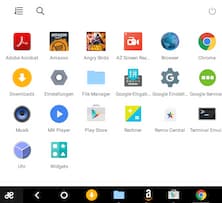 All installed apps are listed in the start menu
Image: teltarif / Screenshot The operating system has a tidy surface that is reminiscent of the conventional Android layout on tablets. The start button is located in the lower left half of the screen. All installed apps can be displayed via this. The user can sort them according to different criteria and search for specific apps using a search field. In the lower right corner of the screen you can access the notifications. This lists, for example, which applications were last installed and when screenshots were taken.

On the next page we go into the use of Android apps on the PC and the control panel and conclude with a conclusion.