Who was the guru of Mahatma Gandhi

On October 2nd, Mahatma Gandhi would have been 150 years old. But his political ethics are anything but out of date, especially in polarized times like today. # 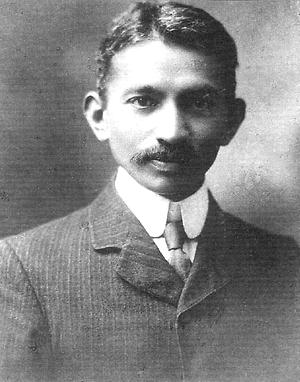 Big soul. Mahatma Gandhi (1869–1948), the leader of the Indian independence movement, in a photograph from 1909.
Photo: unknown. From: Wikicommons, under PD

Hated, persecuted and ostracized, Salman Rushdie feels like no other the constant presence of enemies who have been trying to kill him for more than thirty years as a fatwa punishment for his book "Satanic Verses" - and baited by a four million dollar bounty. This is probably the reason why the Indo-British writer reacted so furiously in several international publications to the seizure of peace guru Mahatma Gandhi, who was murdered by a fanatic, by an American computer company. Rushdie complained that Gandhi is now available to everyone: “He has become abstract, ahistorical and postmodern, no longer a man who is tied to his time, but a floating concept, a prop from the stock of cultural symbols available, an image that can be borrowed, used, twisted, revised and adapted for various purposes. "

For Jawaharlal Nehru, India's first prime minister, the defining image of his mentor Gandhi was “how he set out on the salt march to Dandi in 1930, pilgrim staff in hand. He was the pilgrim in search of the truth: calm, peaceful, determined and fearless, and one sensed that he would continue his search and pilgrimage, come what may. ”Nehru's daughter and successor in the presidency, Indira Gandhi, said later : "More than his words, his life was the message." This message is now being taken to heart on Gandhi's 150th birthday, rather outside India, criticizes Rushdie: "The hardest of all truths is that Gandhi was in the country whose 'little father' - bapu - he was, is becoming less and less important. ”On the one hand, Hindu nationalism in the form of the Bharatiya Janata Party (BJP) is raging in India today. On the other hand, one is subject to an equally strong anti-Gandhian force: money.

The Indian Jesuit Francis D’Sa also speaks of the betrayal of Gandhi's spirit: “As we Christians have forgotten Jesus, India has forgotten Gandhi,” he replied to FURCHE when asked about Gandhi's legacy in India today: “So much violence! If Gandhi were still alive, he would say: I am no longer Indian! This old culture has suddenly given up its commitment to nonviolence. Of course, this is now formulated in an extreme way, because the majority of Indians are still for peace. But the extremists in all camps have become so many more and so much stronger. "

But not only the violent mob in India, incited and led by religious-nationalist-minded political pullers, has said goodbye to Gandhi's ideals. Criticism of Gandhi is also loud in intellectual, secular, democratic, progressive, human rights-oriented and feminist circles. The most prominent example is the Indian writer Arundhati Roy, who puts Gandhi in the corner of a devout racist. Among other things, in an interview with Die Zeit, she settled accounts with Mahatma, the “great soul”: “Gandhi is not someone to whom I automatically felt drawn anyway; I have no particular love for piety and purity - things that he was obsessed with. In fact, it's hard to dismiss him as a benign weirdo. There is something much more vicious at work. It is not just about nonviolent resistance, abstaining from ejaculation, goat milk and self-spun cotton. "

The Linz peace researcher Reiner Steinweg calls Roy's criticism "nonsense" because it only applies to the very early Gandhi. At the same time, he shares certain reservations about Gandhi's specific attempt to break up the caste system in India and to integrate the lowest caste of the Untouchables (Dalit) into society. Gandhi, for example, was against fixed seats for Dalit MPs in the Indian parliament and other structural reforms in the sense of a positive discrimination against this group, which was outcast as a pariah - "he made a mistake," Steinweg said in an interview with FURCHE. Overall, however, the positive aspects of Gandhi's person and mental attitude predominate for him, "the way in which he theoretically justified and implemented pacifist attitudes". Nevertheless, Steinweg is happy “that Gandhi is being lifted from the pedestal” because: “The Indians tend very quickly to canonization and to a cult of saints that is unspeakable for European terms: Even in the case of Gandhi, hardly anyone in India deals with his contents and messages ". - The Gandhi criticism could help to change that, so that Gandhi's messages as a lawyer, resistance fighter, revolutionary, publicist, moral teacher, ascetic and pacifist are no longer outshone by his halo. With this in mind, Steinweg initiated a symposium on active nonviolence on the occasion of the Gandhi anniversary, which last weekend in Linz, the city of peace, made its “contribution to depolarization”.

What can we learn from Gandhi today? Steinweg answers this question first and foremost with Gandhi's attitude towards his opponents: “This is the opposite of what we are used to in today's world. Gandhi did not demonize his opponent, shower him with aggression and hatred. At the same time, he has not made any lazy compromises and has not rubbed honey around the mouths of his opponents. Gandhi made a strict distinction between man and thing. And he allowed his opponents to have their good and humane sides. ”Even if they were bitter enemies, such as General Smuts in South Africa or the British Viceroy in India:“ Don't hate the English, but the English system! ”Is a sentence that belongs to his Talking goes through, or: “So I have no argument with the rulers. But I have a big argument with their methods ... "

Against the cause, not person #

From this behavior of Gandhi the norm can be distilled: "Direct the fight against the cause, not against the person!" 15 such norms, Steinweg prefers the expression "basic attitudes", can be found in the book "Gandhi's political ethics" (Nomos Verlag), which the peace researcher published in German for the first time on the occasion of the Gandhi anniversary. Another norm is: “Put trust in your opponent!” Gandhi practiced this basic attitude, even if he was betrayed 20 times or more. And he also adhered to his rule: "Don't take advantage of your opponent's weaknesses."

Ultimately, these basic attitudes also impressed Gandhi's opponents, emphasizes Reiner Steinweg, and they led Gandhi's movements to success without violence. Especially in polarized times like today, there is still a lot to be learned from Gandhi. Because, as the German peace researcher Christine Schweitzer puts it in an interview with FURCHE: "This mixture of political-strategic thinking and deeply rooted ethics still makes Gandhi a role model today."