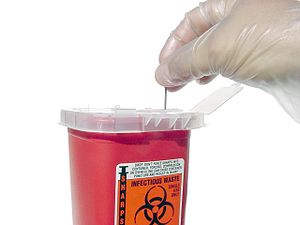 Example of the "biohazard" label: a plastic container for used cannulas

The symbol Biohazard (☣) (English Biohazard - Short form of "biological hazard“) Indicates specific biological danger points. The symbol was developed and established as part of a study conducted by Charles Baldwin at Dow Chemical in 1966.[1]

Objects marked with the symbol represent dangers to humans and the environment that arise from biological substances or organisms. Examples of this are medical waste, biological samples contaminated with microorganisms, viruses, toxins from biological sources, etc. which have a pathogenic effect on humans, animals or plants and thus represent a possible danger. Such substances are marked with the appropriate warning sign to draw attention to correct handling, for example the wearing of appropriate protective clothing and proper disposal.

The term biological hazards is used in the context of civil protection and hazard prevention, see there for details.

Biohazardous substances are classified according to UN numbers according to dangerous goods law (for transport):