Can helium react with anything

The atoms of the elements on the left in the periodic table give off electrons easily. Examples of this are the metals sodium, potassium, magnesium, calcium, aluminum etc. The reason for this is simple: The element on the left in the PSE only has one, two or three outer electrons. The atoms of these elements have to give up these few outer electrons and they are already in the noble gas state (see: octet rule).

Conversely, the atoms of the elements on the right in the periodic table take up electrons very easily. Examples of such elements are the halogens such as fluorine and chlorine, as well as oxygen, nitrogen and so on. Here, too, the reason is quite simple: the atoms of these elements only have to absorb one, two or three electrons, and their outer shell is completely filled and they have reached the noble gas state.

None of this is new to you if you have worked through the chapter on ionic bonding.

But what about the elements that are roughly in the middle of the PSE. What do elements like carbon or silicon (4th main group) have to do to get into the noble gas state?

In order to get into the noble gas state, the atoms must either be carbon or silicon

First, if carbon were to give up four electrons, it would be great energy consuming and second, the carbon would then be called tetravalent positive cation are present. Carbon dioxide would then be one Ionic compound - and what a! The tetravalent positive carbon ions would attract the divalent negative oxygen ions extremely strongly. Carbon dioxide would then be an extremely hard solid at room temperature! But as we know, CO2 gaseous at room temperature. So something can be wrong with the "ion hypothesis". But what does the C atom do to enjoy a noble gas state?

The solution to this problem is called: electron pair bonding.

With its four outer electrons, the carbon atom is quite complex. We want to get to know the principle of the electron pair bond (also called covalent bond or molecular bond) using the simplest possible example, the hydrogen molecule. 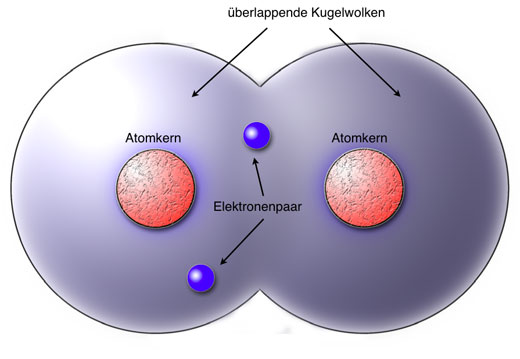 In the electron pair bond, two H atoms approach each other so closely that their spherical cloudsoverlap. One forms common Ball cloud. Since every hydrogen atom has one electron, there are now exactly two electrons in this common spherical cloud. Each electron can be in the entire cloud of spheres.

Every hydrogen atom now has - at least formally - two electrons and is therefore in the state of the noble gas helium.

What is holding the molecule together now?

But why do the two H atoms stay together at all? What actually holds the H2 molecule together? Let's look at the next picture: 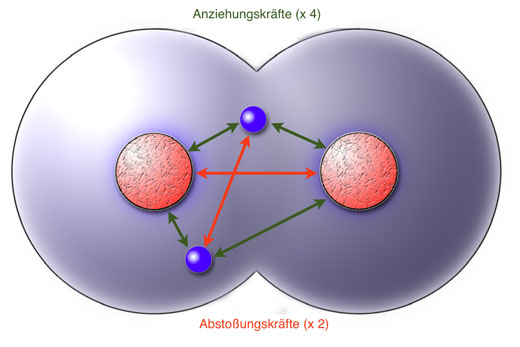 In the case of electron pair bonding, the forces of attraction predominate

In this picture, the forces of attraction and repulsion are emphasized, which in the H, which consists of two protons and two electrons2-Molecule prevail. The forces of attraction predominate, therefore, there is an overall attraction of the two atoms. Since this attraction is caused by a pair of electrons, this type of bond between two atoms is also known as an electron pair bond. Other terms for this are covalent bonds or molecular bonds. The two electrons that are in the common cloud of spheres and are responsible for the bond are called bond electrons, shared electron pair or binding electron pair.

Let us now consider a somewhat more complicated case, namely the element chlorine. We know from chlorine that the atoms "like" to absorb an additional electron in order to get into the argon state. However, a suitable electron donor must be present for this. If you put chlorine with sodium in a vessel, this is not a problem. Sodium immediately releases its only external electron, and the chlorine atoms accept the released electron (donor-acceptor principle).

But what if there is no electron donor like sodium? What if the chlorine atoms are only among themselves? What happens then can be seen in the next two pictures: 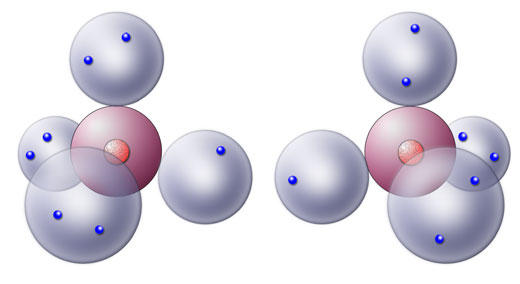 Here we see two chlorine atoms. Every chlorine atom has a single cloud of spheres. Somehow that reminds of the two H atoms, which also each have a simply occupied spherical cloud ... 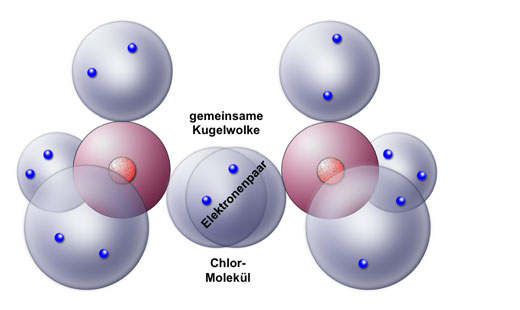 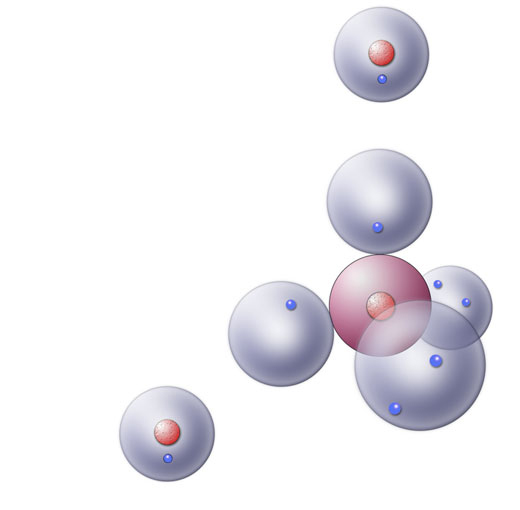 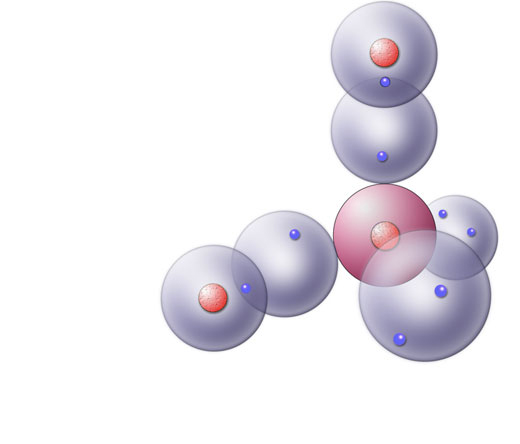 Formation of a water molecule

This is how an H is formed2O molecule.

Why is this representation not so completely realistic?

If gaseous hydrogen is allowed to react with gaseous oxygen in a vessel, an exothermic chemical reaction sets in, water is formed according to the well-known reaction equation

Gaseous hydrogen and gaseous oxygen therefore always appear in the form of diatomic molecules. In this state, the H and O atoms are already in the ideal noble gas state. What moves the atoms of the starting materials to give up their energetically favorable situation and to rearrange themselves to water molecules?

Obviously, the state "water" is energetically more favorable than the state "mixture of H" for the H and O atoms2 and O2"In fact, water is one of the most stable molecules there is. This is also the reason why there are numerous chemical reactions in which water molecules are formed. Just think, for example, of the reaction of glucose and fructose to form sucrose; a disaccharide is formed from the two monosaccharides when water is released. Or a dipeptide is formed from two amino acids when water is released. Such condensation reactions are very common in organic chemistry, including in ester formation, where an alcohol and a carboxylic acid combine to form an ester molecule - with the escape of a water molecule. 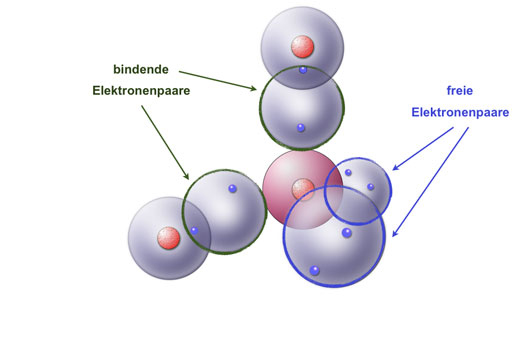 Binding and free electron pairs in the water molecule

In this illustration, the binding electron pairs and the lone electron pairs of the water molecule have been highlighted so that you can understand this important difference.

And at the very end of this section, there are two other important molecules that we come across again and again in chemistry, ammonia and methane. 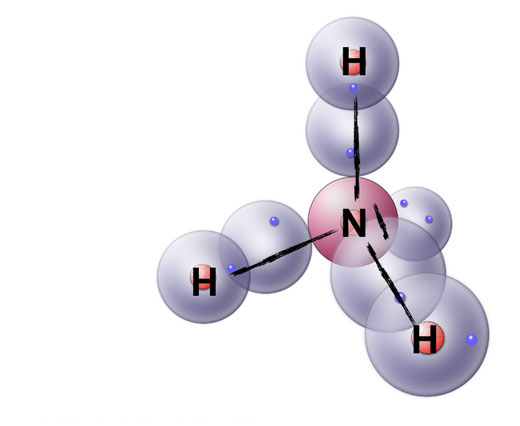 Here the ammonia molecule. The structural formula was recorded on the spherical cloud model so that you can get used to the simpler LEWIS notation. Binding electron pairs are represented here by lines between the atoms, free electron pairs by short lines on the atoms. The lone pair of electrons can be clearly seen in the N atom. 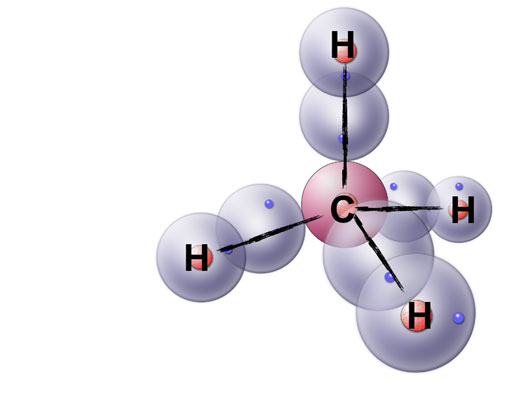 And finally the methane molecule with its LEWIS structural formula. Free electron pairs are not to be found on the C atom, all four spherical clouds are single and overlap with the spherical clouds of four H atoms.