What is an EAN number

The EAN Code is an abbreviation for the European Article Number Code and is an internationally recognized and used method for Identification of products and helps to identify them quickly and globally.

EAN, GTIN and barcodes - a more detailed explanation of the terms

An EAN code is printed on retail products such as groceries and, in addition to a sequence of numbers, also consists of a barcode. Since every combination of numbers in an EAN number is unique, the respective product can be clearly assigned and identified.

The Barcode is an encryption of the number and is easy to read and read with a barcode reader, for example at the supermarket checkout. The EAN code is a so-called multi-width code, which consists of bars and spaces, which in turn consist of more than two widths.

Composition and allocation of the EAN numbers 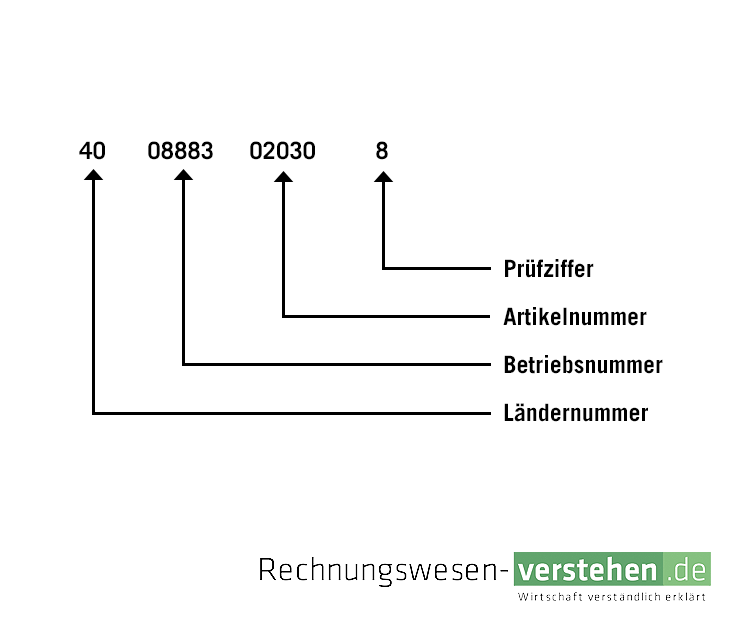 This is how the EAN code is structured

The EAN-13 code consists of 13 numbers and is made up of four different components: The first part with the digits 1 to 3 contains the country code (Germany has 400 to 440). The second part (numbers 4 to 9) contains the assigned number for the respective company from which the product originates. The numbers 8 to 12 form the third part and contain an article number determined by the company.

The last number is the so-called test room, with which the EAN code is checked for correctness. In exceptional cases, products can also be marked with a shorter, 8-digit EAN number if the product itself is very small and the number would take up more than 25% of the area.

In addition to the EAN-13 code, there is also the less common one EAN 128 systemwhich contains additional information such as the packaging size or the color.

In Germany the EAN numbers are replaced by the GS1 Germany GmbH forgive. Companies can apply for the numbers and barcodes there and then assign them to their products independently.

The most important things about the EAN code at a glance: