What are thriller novels known for? 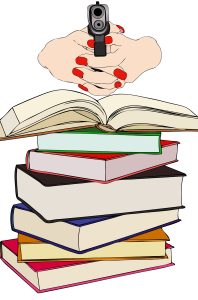 How can detective novels and thrillers be distinguished from one another? What sounds like a purely theoretical consideration has practical benefits in terms of sales figures and reader satisfaction. But even experts disagree on the specific definitions. The question could be answered unequivocally.

Why is it even important, whether on a book cover Detective novel or thriller stands? Both are suspense literature, the target groups should at least have a large common overlap and a good book will always be found. Correct? Yes and no.

I know a writer who considers her works to be detective novels. The big public publishers with whom she has published so far call her thrillers. The argument: Thrillers were doing better at the moment. So it is a pure marketing decision.

Sales promotion is a comprehensible reason, but it has nothing to do with literary standards. However, the example shows very nicely that readers - and therefore buyers - pay close attention to what is written on a book cover. Most readers have their favorite genres and want to enjoy a similar reading experience over and over again. If a novel is incorrectly categorized, this can lead to disappointed readers' expectations - and possibly negative reviews. Not necessarily because the book is bad in itself, but because the reader was hoping for a different book.

At the latest when it is published, it must be clear which genre it is. Then the booksellers can sort the work into the appropriate shelf and at the online retailer it ends up in the right categories. This is the only way for the intended target group to find the book.

Self-publishers therefore need to know the genres and their boundaries exactly. This also applies to publishers (and those who want to become one), because they have to indicate what type of novel it is in the synopsis that they send to publishers.

The demarcation of detective novels and thrillers

An important note in advance: crime novels and thrillers naturally have a lot in common and overlap. In addition, there are quite different perspectives when it comes to the genre boundaries of crime novels and thrillers. Many years ago I defined both genres for myself in such a way that a distinction is easy to make and the main characteristic of the thriller, the thrill, is taken into account.

In a detective novel, a crime usually happens at the beginning or the crime has already taken place and the novel begins where the main character learns about it. In the further course, the investigation work is in the foreground. The point is to convict and arrest the perpetrator. The main character can be a professional investigator (policeman, forensic scientist, forensic doctor, private investigator, ...), but it can also be a lay investigator (see for example Miss Marple, the main character in many novels by Agatha Christie, or Jessica Fletcher Murder is her hobby).

A crime can also take place here at the beginning, but this is not a must. The most important feature is a constant threat that persists throughout the novel and is only resolved towards the end - regardless of whether the protagonist wins or loses. The point here is that there is a threat of a crime or a significant deterioration in the situation - and that the protagonist must do everything possible to prevent that. Meanwhile, the main character is usually even in danger.
Most thrillers focus on the plot. If the characters, their psyche and the character constellation play at least as important a role as the plot, it is called a psychological thriller. As in a crime thriller, the main character can be an investigative professional or a layperson. The latter is more common in thrillers than in crime novels.

For comparison, another definition of thriller

I once spoke to a literary agent, whom I really appreciate, on the subject. He believes that thrillers should have big themes and a big threat to many people, as well as set in several famous locations.

I don't think that in a thriller there has to be a murder on every fourth page and that all of humanity has to be threatened. I do think that the genre also applies to literature in which a small group of people or even just a single person is in danger. Of course, tension is a very important point. But it can be nourished from different things, in addition to the plot, for example, from the development of the characters and the relationships between the characters.

An interview with Jussi Adler-Olsen shows that I am not alone with my definition, in which he says: "The thriller is about solving a crime, the thriller is about preventing a crime." My words. ;-) This makes it easy to differentiate between the two genres and authors or publishers can specifically assign novels.

Do you also write suspense literature? Crime or thriller? Have you already thought about the differences? Do you even define the genre boundaries differently than I do? Then bring it on! I look forward to your comments!