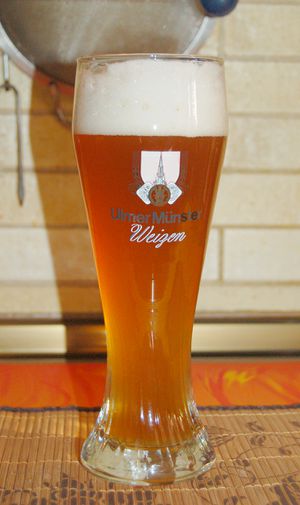 Wheat beer (Wheat beer, wheat) is a top-fermented beer, at least half of which must be made from wheat malt. Wheat beers are differentiated according to their color (from light to dark), but above all according to the type of production. Originally there was only the unfiltered, naturally cloudy "Hefeweizen", which is traditionally produced by bottle fermentation and in which the yeast is clearly visible on the bottom of the bottle. With "Kristallweizen" yeast and suspended matter are filtered out. The original wort is between 11.5 and 13.5%, the alcohol content is between 4.5 and 5.5%. Depending on the malt used, the wheat beer has a light yellow to dark brown color. The dark varieties generally have a higher alcohol content.

Weissbier is a typical Bavarian beer. In the Middle Ages in the Munich area it had a very high proportion of total beer sales, until the common brewing of wheat beer was banned under Duke Maximilian I of Bavaria against resistance from all walks of life. The reason was the resulting wheat beer monopoly, which was initially sold at a high price as a ducal privilege. The Hofbräuhaus, newly built in 1589, was the Duke's brewery, which was the only one allowed to brew wheat beer. Customers were the nobility and the noble court, and the beer has had something exclusive ever since. In 1789 the monopoly fell, every wheat beer was allowed to brew again, as a folk drink the popularity later declined. Weissbier only became a fashion drink again in modern times, but in all of Germany.

The typical wheat beer tastes slightly sour and has a little more carbonic acid than other beers. The decisive factor is the "creamy" taste. Yeast and crystal wheat differ quite a bit in taste. The clear Kristallweizen is livelier and lighter in character, while the cloudy Hefeweizen is heavier, more aromatic and more palatable. There are light and dark variants of both types, and recently there are also light and alcohol-free varieties. Mixed beer beverages are also made from wheat beer. The Weissbierradler (wheat beer with lemonade), which is popular in southern Germany, is well known Soot or Russn called. Opinions can be divided about fashionable mixtures with Coca Cola or various fruit syrups, as well as about a slice of lemon in beer (see below).

Wheat beer is served in special wheat beer glasses. The glass should be rinsed with very cold water before pouring it to prevent the abundant carbon dioxide from converting too much. Then there are two variants of pouring. The simple variant is to hold the glass at an angle and let the beer slowly run into the glass, carefully adjusting the angle. Since a lot of foam can still form, this takes a while. The fast variant, which is therefore favored in restaurants, is a little more difficult. You put the bottle upside down deep into the glass, which is also held at a slight angle. The beer bubbles into the glass in one go without the foam overflowing. You have to practice that, and not all waiters can either. Often the neck of the bottle is held into the beer, which is unsanitary. Correctly, the bottle opening is held just above the beer. When pouring wheat wheat, the almost empty bottle is swiveled again so that the yeast detaches from the bottom of the bottle and can be poured into the glass with the last pour.

A lemon slice in Hefeweizen is just as unusual in Munich as an orange slice on a Pilsner glass is anywhere else. Crystal wheat, on the other hand, can be served with a slice of lemon, which makes the beer fresher but also changes the taste. Sometimes two grains of rice are added to the crystal wheat. It looks nice because the carbonic acid bubbles up from the grains and it maintains the head of the beer. With wheat beer in wheat beer glasses, you clink glasses with the bottom of the glass, unlike, for example, Pilsener.

Wheat beer should be served cellar cold, but not ice cold. Fresh crystal wheat may be 7 - 8 ° C, for yeast wheat 8 - 10 ° C are appropriate, i.e. slightly above refrigerator temperature. Wheat beer must be stored in a cool, upright position, especially the wheat beer, so that the yeast settles on the bottom of the bottle.