How does a cheetah defend itself?

Long-legged, graceful and elegant, they combine powerful dynamism, are fast, agile, supple and at the same time have a majestic beauty that borders on aristocratic extravagance.

Cheetahs are sensitive. They are tender and loving mothers. They are highly specialized in their properties. And they are sharp-sighted: cheetahs can see much better than a person with binoculars!

Cheetahs are energy savers. One of the most important cheetah rules is: Avoid wasting energy!

The elaborate hunting technique, the heat of the day, caring for up to five cubs: everything costs the female cheetah valuable energy. The whole daily rhythm is subordinate to the economical use of the body's own energy. Cheetahs are only active in the morning and evening and during the shady times of the day. People generally rest in the midday heat. This is how cheetah life works, provided that there are no disturbances. 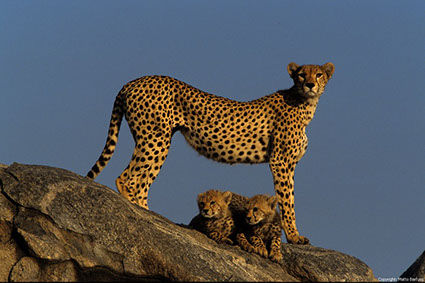 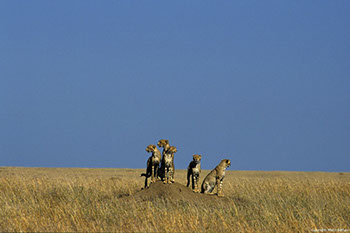 The only fossilized witnesses of the cheetah are found in Asia. This is the basis for the assumption that the cheetah conquered the African continent from Asia.

From today's perspective, the African subspecies was much more successful. The Asian subspecies is now extinct in the wild. For example, the last Indian cheetah was shot in the early 1950s.

Today a maximum of 10,000 cheetahs live south of the Sahara.

The population developments are alarming. Some scientists assume that the cheetah will only survive in a few protected areas in the near future.

Cheetahs live in a country that is cool at night, hot during the day, and mostly shadowless. They prefer the treeless steppe, to which their constitution is optimally adapted. They are dependent on large contiguous areas. The steadily shrinking habitat, however, forces cheetahs to retreat to inaccessible bushland. Life in the bush harbors much more difficult living conditions.

When choosing a location, cheetahs orientate themselves on their prey. They prefer to hunt Thomson gazelles (in Namibia: springboks). During the hikes, mounds of earth, rarely a tree or rock, serve as a lookout point to look out for prey or enemies.

Cheetahs remain relatively true to their location within a larger area up to the age of six months. As the boys get older, the hikes become longer and longer, up to around 35 kilometers a day.

In addition to the food supply, possible dangers from lions or hyenas influence the whereabouts and may also lead to a general change of location.

Cheetahs are top of the world!

They are the fastest land mammals on earth. Cheetahs reach a top speed of 114 to 120 kilometers per hour in the sprint, but only over a short distance of around 600 to 800 meters. This must be enough for them to be successful in hunting.

The cheetah's body is completely geared towards rapid locomotion. He has long extremities and an extremely mobile spine. The claws, which can no longer be retracted from the age of four months, serve as 'spikes' and thus ensure that the dog is step resistant and fast. In the sprint, cheetahs can put their hind legs in front of their front legs. The particularly large nostrils ensure better breathing and oxygen supply during the extreme sprints.

With their breathing, cheetahs cool their heated bodies down after the spurts, because they have almost no sweat glands. In this way, they consume less fluid and also have no body odor. 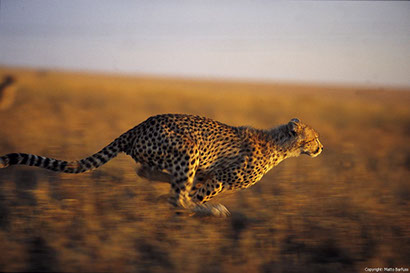 The natural enemies of the cheetah are lions, rarely leopards, especially during the first months of life. Lions kill the young cheetahs and then leave them lying around. This danger is only over when the young cheetahs are big enough to run faster than their enemies. The cheetahs then flee in a star shape in all directions, so that the danger for the family group is reduced.

It is similar with hyenas. As a rule, however, they are content with "chasing off" the cheetahs' prey.

Weapons of the cheetahs:

If it weren't for the human being!

As a species, humans generally cause two fatal dangers: 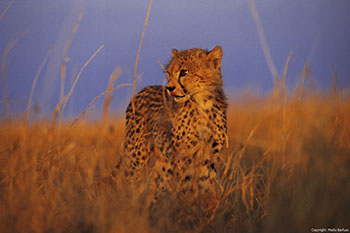 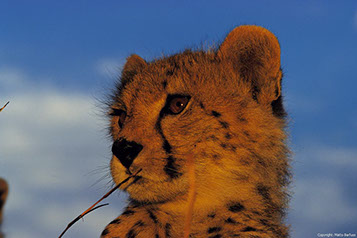 Cheetahs communicate primarily non-verbally, i.e. through thoughts, feelings and behavior. In contrast to the huge roar of lions or the piercing hyena giggles, the cheetahs' sounds are generally reserved and rather quiet.

Wild cheetahs generally only eat fresh prey they have caught themselves, not carrion. For a cheetah family's survival, the focus is always on meeting the hunter's energy needs. If the young are still young, this means that if there is a food shortage, the mother will eat and the young will then have to go empty-handed. Later, when the young are already able to hunt, this principle is reversed.

Cheetahs have an elaborate hunting technique and an unusually fast metabolism. A cheetah family therefore has a high energy requirement and ideally needs food every day.

For cheetahs, eating is always a race against time. Since they cannot defend their prey against lions or hyenas, cheetahs eat very quickly and do not stay with the prey for more than an hour. 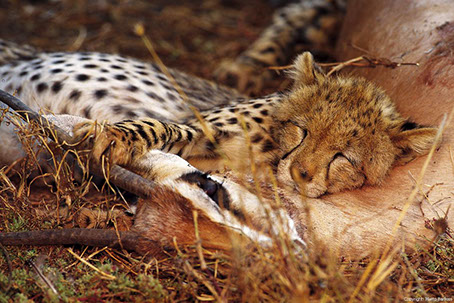 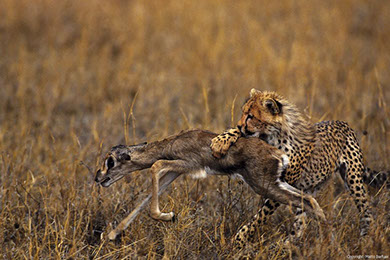 The cheetah sneaks as close as possible to the prey unnoticed (up to approx. 40 meters). If the prey averts its gaze, this is a trigger mechanism. The cheetah can maintain its top speed of up to 120 kilometers per hour over a distance of 600 meters. Then he must have brought the prey down with his front paws. A targeted stranglehold on the throat suffocates the prey very quickly.

The tribute of a hunt is an extremely heated cheetah body, which is cooled down again within the next 15 minutes by breathing heavily. In the meantime, cheetahs are very susceptible to attacks from food competitors. In this case, they give up the prey without resistance. For the cheetah this means at least a double loss of energy, as they first have to come back to a successful hunt with the same expenditure of energy.

The boys learn to hunt by observing their mother closely. The young themselves start their attempts at hunting with young gazelles in a rather awkward way - from around the age of five months. In addition to gazelles, hares and birds are other prey animals of the cheetahs.

The success of the hunt depends on the perfect mastery of the hunting technique and the corresponding experience, the nature of the terrain and the general food supply. On average, 10-20% of the attempts lead to success.

Disruptions caused by careless tourist vehicles can be problematic. If an attempt at hunting is unsuccessful, the survival of one of the youngsters can already be called into question.

Cheetahs grow to be a little larger than a sheepdog. Males reach a length of 2.20 meters, with the tail about 90 cm. Females reach about three quarters of the mass.

Generally speaking, cheetahs are solitary animals. If you meet them in groups, it is either a mother with her cubs or a young cheetah. The males sometimes hunt in groups of two or three and are then usually siblings. They generally do not take part in the rearing of the young.

Copulation and throwing time are not tied to any fixed times. After a gestation period of 90-95 days, up to five cubs weighing 250-280 grams are born. They are still blind for the first 8-11 days. The young are suckled for 6-8 weeks. They are fed meat for the first time after 20 days.

A cheetah family consists of the mother with the young of the last litter. The mother is solely responsible for the care, upbringing and education of the boys.

In the first few weeks of life, the young have a long, gray mane on the neck, which regresses with increasing age.

For the first three weeks of life, the young remain in a grass hiding place while the mother goes hunting. After that, the cubs follow her, but they continue to be hidden during the hunt. Up to the age of six months, the cheetah children are extremely susceptible to attacks from enemies such as lions, hyenas or leopards. Their only protection is the camouflage of their fur and strict hiding. 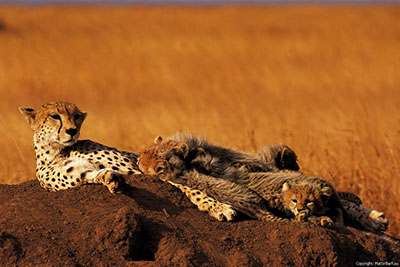 Cheetahs are born hunters. Hunting instinct and all elements that ultimately lead to hunting success are innate. However, the skills must be perfected in the course of development. You will be trained in the game. 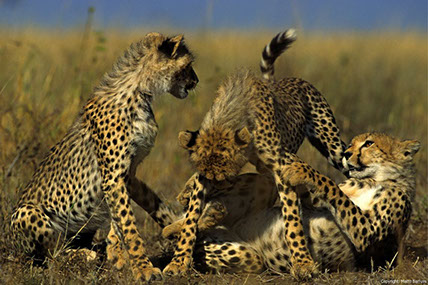 Learning for life by playing ...

All relevant elements of later life are practiced in a playful way: lurking, sneaking up, spitting, knocking down the "prey" (play partner) with the front paws, stranglehold and much more. In the game, all behaviors and functional groups are freely combined, even if they are mutually exclusive in later life.

A relaxed situation is a prerequisite for gaming behavior. If first occupations occur (hunting, danger), the game is ended immediately.

The game is an important element of social bonding. All family members take part. Overly aggressive actions in playful fights are inhibited by painful sounds.

If the mother plays along, she demonstrates skills that are important for the hunt. The use of the tail as a steering rudder during the sprint must be trained particularly intensively.

"French kisses" are very important in cheetah life. They serve to groom each other, maintain social contact and have protective functions.

Licking the fur protects babies from diseases such as rickets, a common cause of death in the first few weeks of life.

The cheetahs use their tongues to clean their fur, especially after they have eaten, when it is necessary to remove the traces of the meal.

"French kisses" are also a sign of mutual affection and strengthen family ties. Especially in the first few months, the cheetah children have very close physical contact with their mother. Above all, this also applies at night, when it is often very cold in the steppes.

Later, the boys tend to sleep among themselves, while the mother rests a little further away. However, they never move more than about 20 meters away from each other, so that they can maintain eye contact at all times. 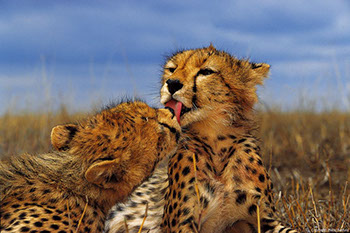 To greet the first rays of sun there is a "morning drink". The cheetahs lick each other's fur. This is often the only way to absorb fluids in the waterless steppe.

A real "drinking binge" is often only offered by a heavy downpour: like many cats, cheetahs don't like being wet at all. The faster they "drink" their fur dry again with their tongue.