Stephen Fry is a nihilist

Archive of the tag ‘stephen fry’

A clip from the cult TV series Blackadder, which was washed from the depths of the Internet again because of the death of British actor Rik Mayall (who plays the heartbreaking Lord Flashheart himself alongside Rowan Atkinson and Stephen Fry). Well deserved, because what is delivered here is really first class comedy joke. You can watch entire Blackadder episodes here on YouTube, for example.

Lord Flashheart, Edmund’s best man, turns up for the wedding. But can the bride resist running away with such a lively and adventurous man?

What became of Jesus ‘foreskin?

What were the times when church leaders were allowed to seriously think about what has become of Jesus ‘foreskin. Here in particular Leo Allatius, the Pope's librarian.
Stephen Fry tells us about her supposed whereabouts on the BBC program QI:

QI: How big was Jesus’s foreskin?

Can you remove your fingerprints with pineapple?

Let's see how this self-experiment goes from Tom Scott and whether this text left my keyboard without fingerprints after successfully copying the method (spoiler: it doesn't work because the grooves in the fingers are simply too deep).

Also from Tom Scott: Mob. How someone sings into a webcam and a flash mob goes horribly wrong.

It is huge! The true greatness of Africa (in German)

Kai Krause made an impressive graphic in which he put a few of the more famous countries on earth into the outline of Africa to show how big Africa actually is. And it's unbelievable what fits in there: the USA, China, India, Japan and all of Europe can all make themselves comfortable in Africa.
Because Kai Krause was so kind as to make his work available as a public domain license-free, I took the liberty of translating his card (unfortunately slightly bumpy in terms of the text) and making adjustments.
Click here or on the picture for the large version with all the bells and whistles: 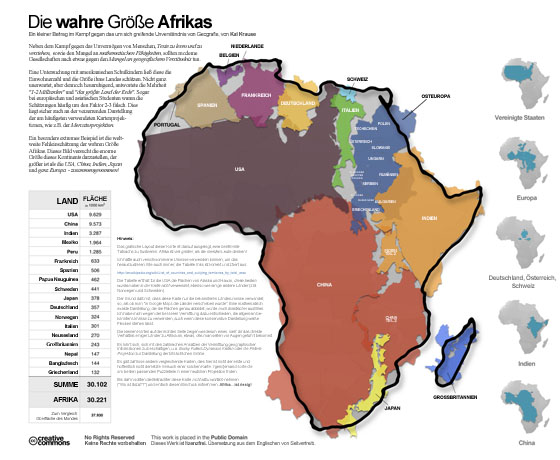 Click here or on the picture for the stripped-down version only with the packed continent: 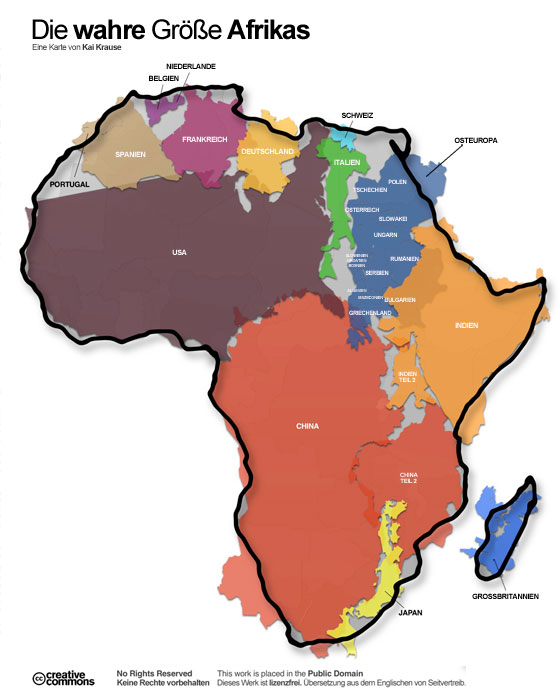 The English original "The True Size of Africa", distributed by Stephen Fry, is available here.

Information is Beautiful has some other comparative maps and a version of Africa with the countries from the table on the left of the map.

via maps against boredom

Stephen Fry, himself an avid technology user, is the narrator in this very positive and entertaining Cambridge University documentary about nanotechnology and the possibilities that a "dwarf technology" -based future could offer (e.g. implanted micro cell phones with emotional transmission, wtf?).

The strange new world of Nanoscience, narrated by Stephen Fry