Have you ever drank sangria

A glass always goes: This is how many people in Germany, a beer and wine country, think. A mistake, says Helmut Seitz in our interview. The honorary professor at the University of Heidelberg is one of the world's most renowned alcohol researchers.

Heidelberg - mulled wine at the Christmas market, a glass of sparkling wine at the party or a beer in the stadium. Alcohol is part of our culture. But why is it so difficult for people to draw the line between indulgence and disease-promoting consumption? Alcohol researcher Helmut Seitz from the University of Heidelberg provides the answers.

Mr. Seitz, when does someone drink too much?
It is very different. It becomes dangerous as soon as someone drinks daily without being able to take a break. Or when the amount of alcohol someone consumes increases. As a rough guide, a quarter of a liter of wine for men and an eighth of a liter of wine for women are reasonably tolerable - per day. But that only applies to healthy people. Overweight people are much more sensitive. And very thin. There are also genetic factors that play a role. We don't know who carries these genes. For this reason alone, one should be careful when consuming alcohol.

Take our test here: Is your alcohol consumption still okay or already dangerous for your health?

What about health benefits? A glass of wine a day is supposed to help against all sorts of things.
Small amounts actually work against atherosclerosis. But I still wouldn't recommend alcohol. No authority in the world would approve it as a drug because its effects are so toxic. We have a million liver patients in Europe. Half of that is due to alcohol.
So do you prefer warning labels on beer bottles, like on cigarettes?
Research has shown that education is of little use. No bans either. The easiest way is still through price and availability. Alcohol is taxed very heavily in Sweden - it works well. In the USA you can only get alcohol from the age of 21. If you want to buy a bottle, you have to identify yourself. And in Germany? Every 16-year-old can buy a case of beer here.
Which diseases are caused by drinking?
Alcoholism in the drinker himself. Fetal alcohol syndrome often occurs in those not yet born when the mother drinks. This is a very bad poisoning in which the central nervous system is damaged. Many of these people suffer from restlessness, learning disorders or allergies later in life. In third place are liver diseases, in fourth place cancer. And then there are the social consequences. Alcoholics eventually lose everything: their work, their marriage, their friends.
Nevertheless, nobody wants to have their after-work beer taken away.
Because it's socially accepted. We live in a culture where people drink all the time. It goes across all social classes and age groups, from poor people to university professors. Alcohol is one of them. There are also hardly any cultural differences. Sure, the Russians drink the most, but otherwise I have patients of all nationalities on my ward - many from Saudi Arabia, where alcohol is prohibited.
Which is worse: a beer every day or a total crash on the weekend?
Neither of these is good for the body. With so-called binge drinking, however, a lot of alcohol gets into the body very quickly. This can have effects that go far beyond a hangover - up to cardiac arrhythmias the next day. The type of drink does not matter. Whether you drink wine, beer or schnapps: In the end, it is the amount of alcohol that counts.
How can you tell if someone has a drinking problem?
Do the so-called CAGE test. You have to answer four questions: Have you ever thought about drinking less? Have you ever been angry about criticism of your drinking behavior? Have you ever felt guilty about your drinking? Have you ever drank alcohol in the morning to get the day started? If you answer yes to one question, you are at risk. With two yes answers, an addiction is likely.
How can I help friends or partners?
There is always a co-alcoholic, namely the partner who keeps still. The sooner you help, the better. Friends need to be open about the problem. That alone can be a nudge for those affected to face their addiction. The family doctor is also an important point of contact. Unfortunately, many doctors do not dare to address the problem because they are afraid that their patients will then no longer come.
What therapy options are there?
It is very difficult to cure the disease. In 60 percent of the cases it is genetically predetermined, in 40 percent it is due to environmental factors. But what you can do is control it, like you do with diabetes. As a first step, the patient has to acknowledge his problem, because you cannot force anyone into therapy. The second step is often group therapy, for example in the form of alcoholics anonymous.
Are there preventive measures for those who are not alcoholics but drink regularly?
The liver doesn't hurt, that's the problem. You therefore only feel an illness at a late stage. It is always good to have the so-called liver values ​​checked by your family doctor. The "Fibro-Scan" that we offer in our clinic offers more precise results. It's a kind of ultrasound for the liver. The 100 euros it costs are worth it. Unfortunately, the health insurances have not yet paid him.

Here you will find our graphic on how alcohol can affect women and men: 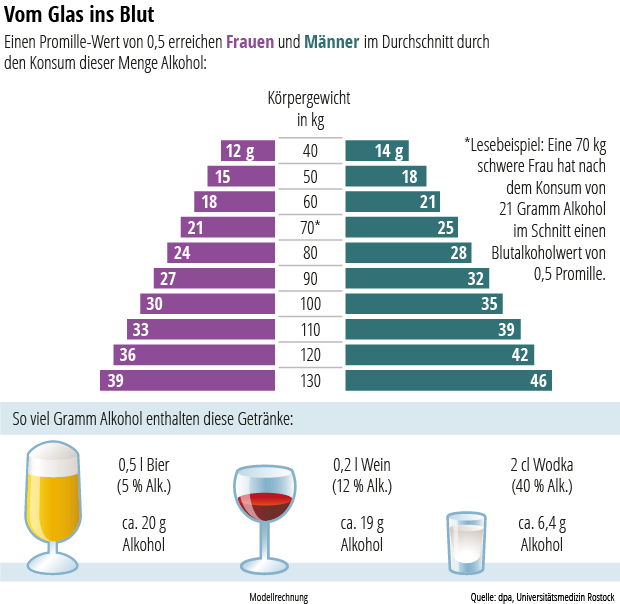 According to a study by the Federal Center for Health Education, young people today drink as little alcohol as ever before. So is everything going to get better soon?
I would be careful with statistics like that. I don't think the respondents are always telling the truth. Binge drinking is all the rage. All you have to do is go outside the door here in Heidelberg: After graduating from high school, high school graduates drink their heads on the Neckarwiesen. This phenomenon did not exist a few years ago.
Germany is the land of beer brewers. How seriously is your research being taken?
Lobbyism plays a major role, you can feel that. After all, many jobs are at stake in the beer and wine industry. The industry specifically finances studies that deal with the supposed benefits of alcohol. At large medical congresses, alcoholic liver diseases have almost never been discussed. That is only changing very gradually.

Helmut Seitz (67) is honorary professor for internal medicine, gastroenterology and alcohol research at the University of Heidelberg. He also works there as medical director of the Salem Clinic and the St. Vincentius Hospital.

Seitz likes to have a glass of beer or a glass of white wine - but never red wine. He couldn't take it, it gave him a headache. He also rejects schnapps.