What started Google Browser in 2008

For most users, the browser is now one of the central applications on the PC - and they are spoiled for choice. However, it is true that, of course, not only a browser can be installed on a computer, so nothing stands in the way of testing alternatives. We have therefore put together brief portraits of the six major browsers Google Chrome, Mozilla Firefox, Apple Safari, Microsoft Edge, Internet Explorer and Opera including download links for you. 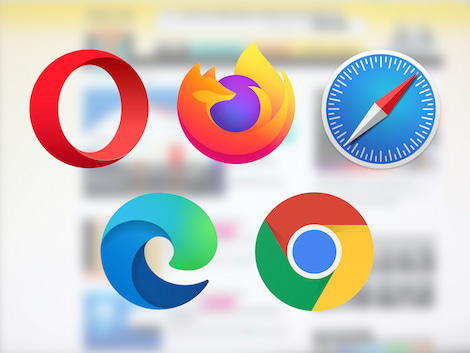 Google entered the browser market with Chrome in 2008, and at the start of Google Chrome there was some trouble: the search engine giant made no exception with its browser in terms of Google-typical data collection, so Google made improvements and abolished the unique ID to identify the browser user.

The Chrome browser is enjoying steadily increasing market shares - and is therefore not only a serious competitor for Microsoft browsers, but also for Firefox. Since the beginning, Chrome has been able to score particularly well with its good performance and its graphical user interface: Here, tabs and address lines are practically reversed, so that there is a separate address line for each tab - other browsers then copied this arrangement. In addition, Chrome was the first browser that combined entering web addresses and searching in one input field - called "Omnibox". Microsoft has also built in this feature from Internet Explorer 9 onwards.

Google Chrome supports so-called extensions with which the surfing software can be expanded. In addition, Google has set up its own store for web apps. When the browser was introduced, it was innovative that each tab runs as a separate process - a crash therefore does not tear the entire system in depth. This idea was also adopted by other browser manufacturers. For more information on Chrome, see our dedicated guide.

Firefox has garnered a large fan base in recent years and is one of the fiercest competitors of Internet Explorer - in Germany, according to most statistics, it has left Internet Explorer behind in terms of user numbers - but is now behind Google Chrome. Developed as a free alternative to the Microsoft browser, Firefox, for example, enjoys great popularity thanks to the possibility of expansion using countless add-ons. In the meantime, however, Firefox struggled with performance problems compared to the competition, primarily due to Google's Chrome browser - the Firefox developers are therefore focusing more and more on improving speed.

Mozilla changed its system of version numbers some time ago: While Firefox had arrived at version 3.6 after the first eight years in 2010, the places after the point are only used to mark small bug fixes and new releases receive a new one Major version number. Accordingly, the version jumps no longer necessarily characterize fundamental changes to the browser. With Firefox 58 there was a renewed design and the performance when loading pages was noticeably improved. You can find more information about Firefox in our special guide.

Safari is the standard browser on Apple computers with the Mac OS X operating system. As is typical for Apple, the software primarily offers visual highlights: The TopSites feature gives you a stylish overview of your favorites, CoverFlow makes it possible the graphical representation of history and favorites to leaf through. But safari doesn't have to hide technically either: When it comes to compatibility with web standards, Safari is at the forefront. In terms of rendering engine, Apple relies on Webkit, which was also used in Google's Chrome browser for a number of years.

The current version of the Safari browser is only available for computers from the cult manufacturer. If you are still using an old Windows version of Safari, you should be careful, because Apple has stopped its further development - there have also been no security updates since August 2012. Therefore, the use of the software is no longer recommended for such a security-relevant application as a web browser. There was never a Linux variant of the Safari browser.

You can find more information about safari in our special guide.

With Windows 10, Microsoft introduced a completely new browser, called Edge: The software manufacturer promised not only a performance boost compared to the previous browser, Internet Explorer, but also innovative features. So the browser came with a reading mode in which, apart from the text, many elements of a website could be hidden in order to increase the flow of reading. In addition, positions could be marked directly on a page and annotated, after which these could be shared with other users if desired.

Since the first Edge browser based on the in-house EdgeHTML engine was not very popular, Microsoft stamped it in and developed a new Edge browser based on the Chromium engine Blink developed by Google, which will be delivered from 2020. In addition to bookmarks, there are now also "collections" in the faster Edge, which users can use to temporarily save content found on the Internet and keep it for later viewing.

For more information on Microsoft Edge, see our dedicated guide.

Opera is an old acquaintance in the browser market: Surf software from Norway has been around since the mid-1990s, which was initially chargeable, then was also available free of charge with advertisements and was finally free of charge and advertising. Thanks to its long development time, the Opera is a solid browser alternative, although the software has always been a pioneer in the implementation of innovative features.

Accordingly, the browser currently has some helpful functions ahead of its competitors: For example, there is the Opera Turbo feature, which transmits compressed websites to the recipient - this saves time and money with slow connections. The Opera also knows extensions with which the browser can be expanded to include certain capabilities. With version 45, Opera also introduced an integrated messenger that can be used to chat via Facebook Messenger or WhatsApp, among other things.

The Opera Unite feature, which practically offers the functions of a small server to easily provide photos for friends, for example, was omitted from version 12. This also applies to the Opera widgets - the mini-applications can also be used independently of the browser start . You can find more information about Opera in our special guide.

Other browsers: K-Meleon and other alternative software

Alternative browsers:
Further information
In addition to the six "big" browsers, there are also numerous smaller competitors who eke out a niche existence, such as the K-Meleon, which is based on Mozilla's rendering engine Gecko and uses Windows-internal functions for the display - that's supposed to be computing power save up. Accordingly, the surface comes as a side effect in the Windows design.

There are also many other web browsers that are less well known in Europe, but some of which are more popular in Asia. These include Sleipnir and Maxthon. Information on other alternative web browsers can be found in another guide.