Homophobia in the gaming scene: a lesbian saves the world

With the lesbian main character, the video game "The Last of Us" angered homophobic gamers. But at the same time it introduces many to a queer identity. 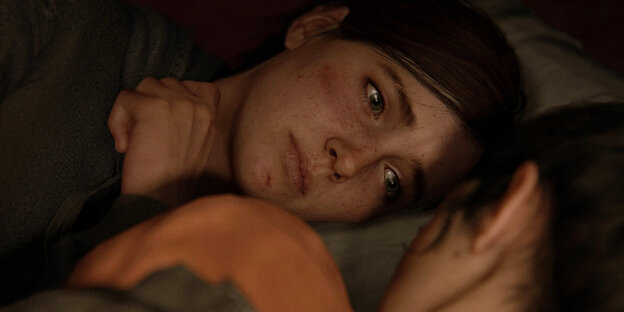 Heats up minds in the gaming scene because she's a lesbian: Ellie Photo: PS4 Pro / Sony

Games can create strange worlds just as well as books, films or series. The fact that they are artistically and culturally valuable is still controversial. Probably also because only the most successful titles manage to get noticed outside the scene.

The majority of the ten best-selling games for the PlayStation 4 can be assigned to the first-person shooter genre: Regardless of whether it is “Call of Duty” or “Battlefield” - it's always about shooting. The main characters are similarly monotonous: almost all of them are white, heterosexual and male. Female characters are at most a nice additional variant and are usually left behind and smiled at by gamers.

Yes, there are certainly also triple A games - this category corresponds to the “blockbuster” in the film world - that only have female protagonists. Lara Croft in the well-known "Tomb Raider" series or Aloy in "Horizon Zero Dawn" for example. There is even progress in character design: Lara is no longer held up on her adventures by an oversized bust and is finally allowed to fight her way through the catacombs in functional clothing.

But they are still subject to a certain flowery-aesthetic ideal. In contrast to male figures, large biceps or noticeable scars on the face are still taboo. Since they are exposed to the same hardships, neither do they shy away from shootings and knife fights, climb mountains and cover exhausting hikes, a real "plot hole". It was unimaginable for a long time that such a heroine could also be decidedly non-heterosexual.

So it is not surprising that the new game "The Last of Us: Part II" is causing a sensation. In the first part, the development studio “Naughty Dog” let the gamers slip into the role of the fatherly fan favorite “Joel”, his sweet foster daughter Ellie always at his side. Together they roamed the remnants of civilization. The spread of a mysterious fungus that turns infected people into a kind of "zombie" has previously led to their collapse.

In the sequel to the blockbuster published a few weeks ago, said Ellie, now 19 years old, takes on the lead role herself - and turns out to be a lesbian. With her rival Abby, she faces an extremely muscular antagonist who is controlled over roughly the same playing time. The latter fights at times on her tour de force alongside a trans * boy named Lev.

This heats the minds of many, especially male, gamers. On Reddit, Twitter, Facebook & Co, tirades of hate roll over themselves: "Unrealistic" are the characters. Ellie would not have undergone a credible character development, but was the product of a “targeted political agenda” by the game makers who wanted to ingratiate themselves with the zeitgeist as a “social justice warrior”.

Abby, on the other hand, looks "like a man" because of her muscular build, that is, incredibly unsightly. Some accuse the game of developing sympathy for Lev and thus for a trans * figure.

On "Metacritic", probably the most important website for video game reviews, the supposedly disappointed fans gathered for a so-called "Review Bombing", ie a targeted negative evaluation of the title. Just a few hours after publication, the rating sank into the basement, even before the evaluators could have played the game.

At the beginning of July 2020, it landed there with just under 109,000 ratings and only five out of ten possible stars. In the case of media representatives, however, the game achieved an impressive 94 out of a possible 100 points. It is clear that this is less a legitimate criticism than misogyny, everyday homophobia and transphobia.

But why does this game attract so much hatred? After all, LGBTQ characters have been around since video games were around. As the exhibition "Rainbow Arcade" at the Schwules Museum in Berlin 2019 showed, however, until recently they only appeared marginally and were ridiculed with clichéd depictions. There has only been more variety for a few years, apart from the big blockbusters, among the indie games that do not have multi-million dollar marketing behind them and are aimed at a smaller audience.

The last part of the “Walking Dead” series recently delighted queer gamers. Between 2012 and 2019, a total of four games for the well-known zombie comic and series hit were published. There, Clementine, who was initially 8 years old and then turned 17, is also a tough female protagonist in the center.

As is usual in indie games, fight sequences take a back seat to dialogues with various options, so that decisions made and interpersonal relationships sometimes have an impact on the course of the game. In the final edition, the player is free to enter into a relationship with a boy, a girl or no one at all.

Unlike male figures, large biceps or scars on the face are still taboo

The “Life is Strange” series also had a very positive response from the LGBTQ community. While the main game focuses on the young Max with her superpowers, the pre-story "Before the Storm" is mainly about her best friend Chloe, a punk skater lesbian. The story is also interactive, but the sexuality cannot be changed. She is even an integral part of said history, as it is mainly about helping her partner Rachel find her birth mother.

Still, “The Last of Us: Part II” is an absolute novelty. Unlike Clementine, Ellie's homosexuality is an integral part of the plot from the start of the game, not just an easy-to-ignore option. The gamers have to slip into their skin with Ellie for more than 20 hours, fear, fight, keep dying and try again until the opponent is finally defeated and the challenge has been mastered.

Similar to the relationship between readers and a fictional character that they have come to love, a relationship develops that can possibly be experienced even more intensely in the game. The nerve-wracking setting not only welds you together. It even leads to identifying with the lesbian Ellie.

The audience that slips into Ellie's skin is very different and wider than that of indie games. The first part was already sold over three million times - to the end of the game, who at the time could not expect to come into contact with LGBTQ issues in the sequel. Never before have shooter fans had to empathize with a non-heterosexual character for such a long period of time.

In the mainstream, where homosexuality and a non-stereotypical image of women are still offensive, this has a high level of social relevance - and great potential for getting a broad masses used to queer identities.

In spite of the wave of hate speech, “The Last of Us: Part II” was sold more than four million times within the first 48 hours. A PlayStation 4 exclusive has never sold so well so quickly. Ellie may be the first, but she may not be the last.