How electricity is grounded in trains

Certification for earthing of S-Bahn and long-distance trains

In addition to regular training on the various tasks of the fire brigade, the earthing of the power line or the conductor rail must be specially trained and certified by Deutsche Bahn.
This certification is particularly important for the Pinneberg fire brigade. In its urban area, the fire brigade is responsible for 2.5 km of S-Bahn tracks and long-distance train tracks. According to the AAO, the fire brigade is also moving out to the municipality of Prisdorf to provide support there. In addition, the Pinneberg fire brigade provides the so-called rail arming train as part of the disaster control concept of the Pinneberg district.
This equipment train consists of vehicles from the city of Pinneberg and the district of Pinneberg.
The Pinneberg district has procured, equipped and stationed an equipment trolley for equipment / railroading and a command vehicle and stationed it at the Waldenau site. These two vehicles are supplemented by the rescue vehicle, the WLF / crane with the armor roll-off container, an all-terrain LF10 and an MTW from the city of Pinneberg.

When deployed in the area of ​​the track structure, the emergency services are exposed to particular dangers. The trains travel at high speeds, cannot swerve and have very long braking distances. Most locomotives and locomotives have electric motors and are powered by the overhead line or one
Powered rail.

In order to protect themselves from these dangers, the rescue workers only enter the track bed after the railway has confirmed that the route has been blocked in writing by fax and, if necessary, the power has also been switched off. Up to 15,000 volts flow through the lines.
In the case of the S-Bahn, the electricity is always switched off because the power rail is right next to the tracks. 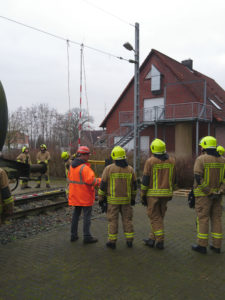 Like all fire brigades that have a railroad track running through them, the Pinneberg fire brigade is also equipped with grounding material. In the event of an emergency, despite the power being switched off, the system is always earthed, as the “residual power” is still sufficient to seriously injure or even kill people. This measure must be mastered safely and carried out in the correct order. The implementation is like life insurance for the emergency services, who have to rely on the correct implementation, according to trainer Jörg Meyer-Jürgens from the Pinneberg fire brigade. 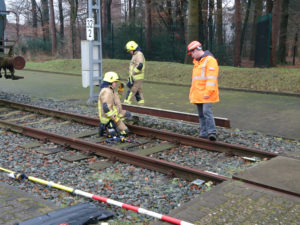 In order to maintain the qualification, a re-certification must be carried out every two years. On one weekend, 26 workers were trained in how to handle the respective harness for earthing the S-Bahn conductor rail and the overhead line in the long-distance railway area. The training was carried out by experts from Deutsche Bahn. This includes a theoretical part in order to recapitulate the fundamentals and the dangers at the scene of the incident, before each rescuer himself has to use both earthing systems at the simulated incident site.
For this training, a piece of track is installed at the fire service center in Ahrenlohe.