What is insufficient about quantum mechanics

Quantum mechanics in the earth's core

Without a magnetic field, life on earth would look rather uncomfortable: high-energy cosmic particles would penetrate the atmosphere in large quantities and cause damage in the cells of all living beings. Malfunctions would accumulate in technical systems, and in individual cases electronic components can be completely destroyed.

Regardless of its great importance for life on earth, it has not yet been clarified in detail how the magnetic field is created. There are various theories about its origin; From the point of view of many experts, however, these are insufficient or faulty. A discovery by Würzburg physicists provides a new approach for a possible explanation. They present their study in the current issue of the journal Nature Communications. According to this, the key to the effect could be hidden in the special structure of the element nickel.

Contradiction between theory and reality

"The current models for the earth's magnetic field work with values ​​for the electrical and thermal conductivity of the metals in the earth's interior, which cannot match reality," says Giorgio Sangiovanni, professor at the Institute for Theoretical Physics and Astrophysics at the University of Würzburg. Together with his doctoral student Andreas Hausoel and postdoc Michael Karolak, he is responsible for the international collaboration that has just been published. Alessandro Toschi and Karsten Held from the Vienna University of Technology, with whom Giorgio Sangiovanni has a close long-term cooperation, as well as scientists from Hamburg, Halle (Saale) and Ekaterinburg in Russia are also involved.

6,300 degrees Celsius and a pressure of around 3.5 million bar prevail at the center of the earth at a depth of a good 6,400 kilometers. Under these circumstances, the predominant elements, iron and nickel, form a solid metal ball, the inner core of the earth. The outer core of the earth is located around this sphere, where iron and nickel are viscous. In this electrically conductive liquid in the molten iron, electrical currents can be amplified and magnetic fields can develop - at least according to the current geodynamo theory. "But this is not free of contradictions," says Giorgio Sangiovanni.

“The reason for this is that iron differs significantly from common metals such as copper or gold because of its large effective electron-electron interaction at room temperature. It's highly correlated, ”he says. However, the effects of the electronic correlation are significantly weakened at the extreme temperatures of the Earth's core, and conventional theories can be used. These theories then predict a much too high thermal conductivity for iron, with which the geodynamo would not work.

Nickel behaves differently. “We discovered a clear anomaly in nickel at very high temperatures,” says the physicist. “Nickel is also a highly correlated metal. The reason for this is not the electron-electron interaction alone, as is the case with iron, but is mainly due to the special band structure of nickel. We call the effect band-structure-induced correlation. ”The band structure of a solid is only given by the geometric arrangement of the atoms in the lattice and the type of atom.

Iron and nickel in the earth's interior

"At room temperature, iron atoms are arranged in such a way that the respective atoms sit at the corners of an imaginary cube with a central atom in the middle, in a so-called bcc lattice structure," explains Andreas Hausoel. However, if temperature and pressure rise, this structure changes: the atoms move closer together and form a hexagonal lattice - physicists speak of an hcp lattice, which means that iron largely loses its correlated properties.

But nickel is different: “In the normal state of this metal, the atoms are packed as tightly as possible in the cube structure. You don't change this arrangement even if the temperature and pressure are very high, ”says Hausoel. Only the interaction of this geometric stability and the electronic correlations originating from the geometry make the unusual physical behavior of nickel under extreme conditions explainable. Although so far neglected by geophysicists, nickel seems to play an important role in the earth's magnetic field.

The events in the core of the earth are actually not the focus of research at the chairs for theoretical solid-state physics at the University of Würzburg. Rather, Sangiovanni, Hausoel and their colleagues concentrate on the properties of strongly correlated electrons at low temperatures. You are interested in quantum and so-called many-body effects, which are of interest for the next generation of data processing and energy storage. Superconductivity and quantum computers are the associated keywords.

Data from experiments are not used in this type of research. "We take the known properties of atoms as input, incorporate the findings of quantum mechanics and use them to try to calculate the behavior of large atomic compounds," says Hausoel. Because these calculations are extremely complex, the scientists have to rely on external support - the high-performance computer SUPERMUC at the Leibniz data center in Garching.

And how did the earth's core come into play? “We wanted to see how stable the novel magnetic properties of nickel are and have found that they can also survive extremely high temperatures,” says Hausoel. Discussions with geophysicists and further studies of iron-nickel alloys have shown that this discovery could be relevant for the processes in the earth's core.

To the press release of the Vienna University of Technology 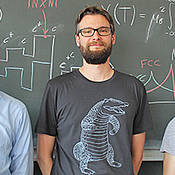