What song made Aaron Lewis famous 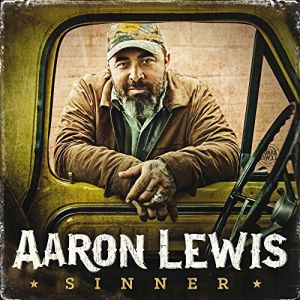 In 2012, Aaron Lewis, who by then had actually made a name for himself as the front man of the alternative metal band Staind - which, by the way, earned him the honor of being ranked 49th in the list of the best metal singers of all time - drawn a fine line in order to concentrate fully on country music as far as his planned solo career is concerned.

His long player debut "The Road" promptly reached a place in the Top 10 on the Billboard Country Album Charts. Now, almost four years later (where has the time gone?), The wildly tattooed, bearded and massive, as well as charismatic-looking protagonist (this is how I imagine a parade redneck from the outside, a typical type of human being that you really only want to be a friend ...), created enough independent new material to open the next country chapter with "Sinner".

Aaron gets into his new work immediately with the title song "Sinner", directly with the participation of the duet-proven top carat Willie Nelson, who provides a nice contrast with his strange voice. Then comes “That Ain't Country”, a lament for the authenticity of today's songs in the genre. You can see how you want to, Lewis found the songs of the old tracks just more honest and better. The instrumental processing of his pieces is therefore also absolutely in traditional spheres. Steel, Dobro, Harp, acoustic and electric guitars (absolute class here baritone specialist Brent Mason) set the tone, played of course only by class people (including Ben Kitterman, Jim 'Moose' Brown, Paul Franklin & Co. ). Another luminary in this field, Buddy Cannon, produced in the famous Blackbird Studios.

Additional prominent supporters are Vince Gill, Dan Tyminski and Alison Krauss from Union Station, the latter with wonderful harmony songs, among others. with the successful Chris Stapelton cover "Whiskey And You". The southern rock "Northern Redneck" is probably still dominated by the collaboration of its predecessor with Charlie Daniels. A typical song that would also be compatible on any CDB album.

And so all of the quite atmospheric, narrative-style, consistently melodic tracks (with two exceptions all composed by Aaron) run through the album in their traditional and finely performed way, like a red thread until the end. I particularly like pieces like “Mama”, “Stuck In These Shoes” or “I Lost It All”, thanks to the Krauss harmony chants already mentioned. At the end of the day, daughter Zoe Lewis and her The Loving Mary Band are allowed to present the Bruce Robison piece "Travellin‘ Soldier ", which the Dixie Chicks have already performed, while Papa Aaron only sings as a supporter this time.

As a subtle criticism, I would like to briefly note that Lewis felt a little too much depressive mood on his own behalf (words like 'demons', 'damage', 'darkness', 'sinner' etc. are often used in the lyrics) with his musical proclamations. In principle, he should be very happy to be able to eke out a successful existence as a musician.

I think if his alarm clock would ring at 04:23 am (voluntarily as well as compulsorily ...) 5 times a week, like me, to go digital after walking the dog -dominated, today's office routine (including two trips through the construction site-adorned Ruhr area), but the demons would stand in front of the door for him even more and in a much longer queue! Ok, I also know that I complain at a very high level here, but a lot of people in this world are certainly much worse off than me.

Conclusion: With “Sinner”, Aaron Lewis consistently continues his chosen style, which is on traditional country paths. Charismatic singing, great guests, excellent musicians and an experienced producer provide the material that people will soak up with glee who have little to do with contemporary modern New Country and who are more into the good old days of the genre or whatever theirs As far as musical tastes are concerned, you are quite flexible. And, dear Aaron, to put your mind at ease: You don't need to repent that “Sinner” immediately shot to number 1 on the Billboard charts. God has already forgiven you for that long ago ...