How do CROWS towers work

Main quest, Sword Coast: Help against Crow / Defeat the scouts at the tower: Free the seas with the walkthrough

Main quest, Sword Coast: Help against Crow / Defeat the scouts at the tower

So that was it. You are part of Stahlbart's crew and as such on the ship to the Sword Coast. There you end up with Patty and Stahlbart in tow. Don't forget to put your shirt back on after the admission ritual and let Stahlbart tell you a few bars. Apparently the hostile Captain Crow has holed up here somewhere, and it would be easy to find out where.

Stahlbart suggests talking to the pirates at the top of the tower, whom he could already see from the sea. The two quests that are subordinate to the titan weapon "Help against Crow" and "Talk to the pirates at the tower“A - and that's exactly what we're doing now. On the beach you loot the shabby box and take out the clutter, then head north for a moment and then turn right back to the west. Follow the overgrown slope up to the tower. It would be good to save beforehand.

As soon as you arrive, several pirates march towards you, who have some savages with them. The dialogue cannot be influenced, so follow the amusing words and then you have to fight. The fight begins, the small quest ends and the phase "Defeat the scouts at the tower" begins.

Defeat the scouts at the tower

Forget to rush right into the middle. At least we recommend retreating first. Patty and Stahlbart also fight quite well on their own, and you can use the few meters of heel money to get yourself out of trouble first. If neither enemy is focused on you, you can run to the side towards the tower and stab the bastards in the back. 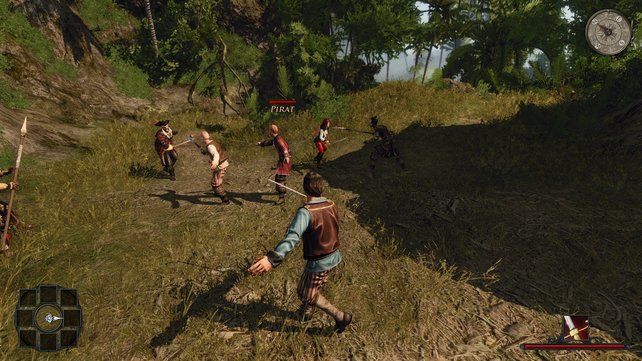 Let Patty and Stahlbart do it and stab the scoundrels in the back.

It is just important not to be in the front row when the scouts attack, but to stalk as much as possible. The poor have no idea what is happening to them while you hit them with the captain and Patty as if there is no tomorrow. Loot the corpses of the attackers (e.g. there is a pistol) and then talk to Patty and Stahlbart in front of the tower.

The latter wants to throw himself into a barrel of rum that he found here, and you learn that Crow has enlisted the help of some savages. You can't avoid exploring the island if you want to find Crow's ship and the harpoon, and for that you can either get help from the Inquisition or from the natives (the quest "Help against Crow" is suspended here for the time being as long as you found no support). Stahlbart and Patty pitch his tents here and you have to decide which direction to take.

Be sure to loot the tower beforehand, where there are some provisions and some small valuables, roast your meat supplies by the campfire behind it, go to sleep if you have to, and then slowly make up your mind. You can also explore the island and go on your own, but you have to make a decision for the main quest.

Note: One does not necessarily exclude the other. You can choose the natives, go there, and still take the path of the Inquisition. You can also do quests for one side and the other. The point at which you have to make a final decision is clearly marked in the dialogue as the point of no return. We will point this out again at the appropriate point in the solution.

If you want to mobilize the Inquisition in Puerto Isabella, the new quest "Crow's ship", Otherwise the mission named"The natives", Both to be found in the diary under" The Sword Coast ". Say Steel Beard when you're ready and he'll join you again.

Have you seen this video for Risen 2?