"The secret of Colorito": Big appearance for the theater group of the Pestalozzi School in the old department store - Mayor and head of school dr. Ingenthron: "Exemplary for the great work at the Landau schools" 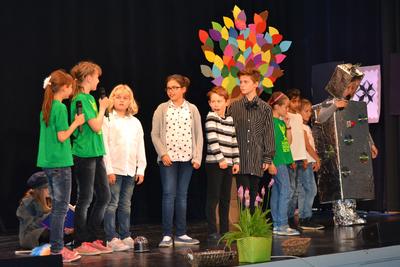 In the old department store it was now time to set the stage for the actors of the Pestalozzi School's theater group.

In the old department store it was now time to set the stage for the actors of the Pestalozzi School's theater group. 23 pupils from the third and fourth grades of the elementary school let the audience in on the secret of Colorito and took the more than 200 spectators on a journey into the land of colors and shapes.

Mayor and Head of School Dr. Maximilian Ingenthron attended the theater performance and was impressed by the 50-minute performance. “What the students and their teachers have achieved is truly impressive,” explains the mayor. "The stage set, props and costumes were designed with great attention to detail, with the help of which the young acting talent told the story of the not harmless search for the magical crystal of colors."

The commitment of the Pestalozzi School and its theater group is exemplary for the great work that is being done at the Landau schools as a whole. “Landau's schools are characterized by their great diversity and enormous creativity. A few weeks ago this found a fantastic expression in the school culture festival - and here too the Pestalozzi School was represented with a wonderful contribution, ”said Dr. Ingenthron. His special thanks go to the responsible teachers around the directors of the theater group Sabine Guth and Christa Herbel-Guth, who organized the performance.

The Pestalozzi School's theater group has existed for over 15 years and performs two plays every year. The young actors rehearsed for about 12 weeks and, with the support of classmates and parents, made props, sets and costumes. In addition to the well-attended evening event, in the morning the first and second graders as well as the preschool children of the Landau daycare centers had the opportunity to watch the play about the story of the magician Oscuro and his sister Lumina.