What exactly is growing pain

Growing pains in children are a diagnosis of exclusion

Up to a third of all children between the ages of 2 and 12 have growing pains from time to time. Before this diagnosis can be made, serious illnesses must be ruled out, such as an infection, a broken bone, rheumatism or even a bone tumor. Parents should therefore consult a specialist if their children continue to be in pain. 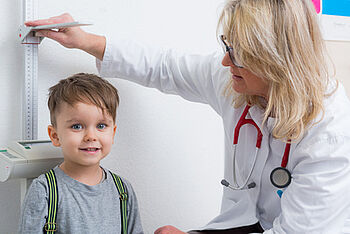 If a preschool or school child complains of burning, pulling or pounding pain in both legs or arms, predominantly at night, growing bones may be the cause. Usually the symptoms do not occur during the day. "Growing pains are not joint pains," emphasizes Professor Dr. Alexander Beck, Professional Association for Orthopedics and Trauma Surgery (BVOU). "The pain typically occurs in the calves, back of the knees, shins or the front of the thighs."

Growing pains are a common phenomenon in orthopedics, but so far only insufficient research has been carried out. There are also no diagnostic tests that can unequivocally prove growing pains. Rheumatic diseases, bone tumors, bone infections, or unnoticed bone injuries cause similar symptoms. Such serious illnesses can be detected with imaging tests such as magnetic resonance imaging or blood tests.
It is unclear why many children experience pain as they grow. One suspicion is that the soft tissues grow more slowly than the bones. The periosteum is put under tension during a growth spurt and causes pain. Another theory is that the young bone fatigues as it grows and the pain is an expression of this fatigue. Psychosocial factors could also play a role, for example when children deal with conflicts with their parents about the pain.

“Unfortunately there is no therapy,” Beck regrets. “Parents can relieve the pain with massages or a hot water bottle. Cooling pads also help some children. If the symptoms are very severe, a mild pain reliever can also be administered […] ”. However, this should only be done in consultation with the treating specialist.

Symptoms of growing pain at a glance: