Apple iPad Pro as a notebook replacement: Pretty good. But not perfect yet

The iPad Pro is handy, has a lot of power and a good battery life. However, the current limits of the software could disqualify it as a laptop for some interested parties. We'll show you here where the problems lie.

In 2016 I worked as a business sales manager and when I visited customers I liked to leave my laptop at home and just take the iPad Air with a keyboard cover and a matching pen.

This combination was smaller, lighter and more versatile than my big Thinkpad and pencil selling in particular was much more intuitive. Emails weren't a problem either and Excel worked at least to some extent. Accordingly, the iPad Air covered around 80-90% of my working day at that time and for the last 10% I used my laptop in the evening hours. 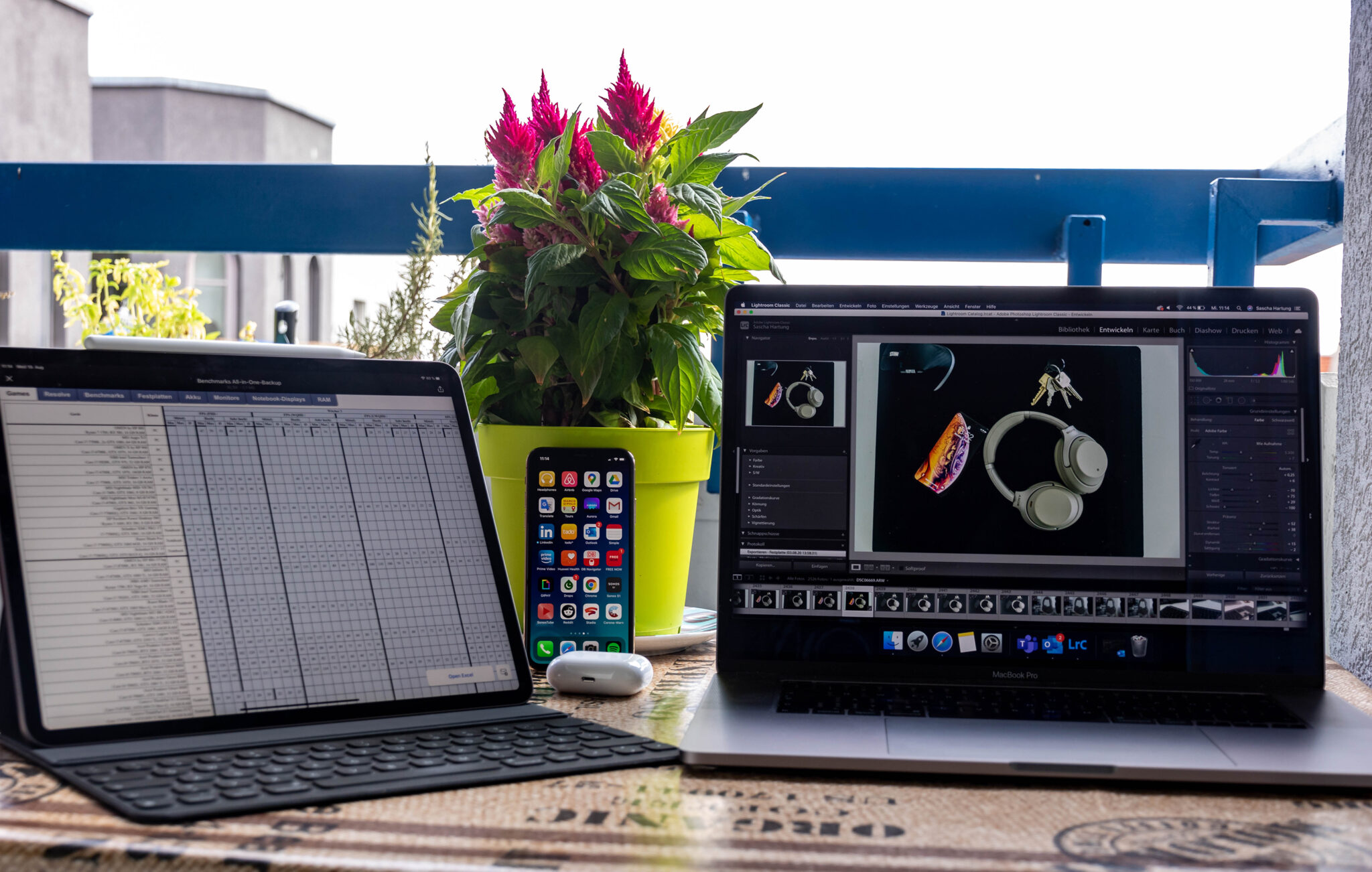 Four years later and with some changes to the iPad's operating system, I want to check whether Apple is finally ready and whether I can simply invest in a current iPad Pro instead of a laptop and a tablet.

The iPad Pro is an iPad. It also does the typical tasks of an iPad accordingly well. Thanks to four speakers and a large, beautiful display, some Netflix on the couch is really fun and surfing the Internet is great too.

Thanks to features such as the 120Hz Pro Motion Display and the A12X SoC, the iPad Pro is also very suitable for demanding games and ensures a very smooth display even in small applications.

As trivial as it sounds, scrolling through Twitter, Instagram or Pinterest is just more fun when nothing is jerky. The same applies, of course, to the use of the Apple Pencil and suitable apps for drawing. The delay between pen and display is almost zero, making the combination of iPad Pro and Apple Pencil as close to a sheet of paper and a pen as it is currently possible. 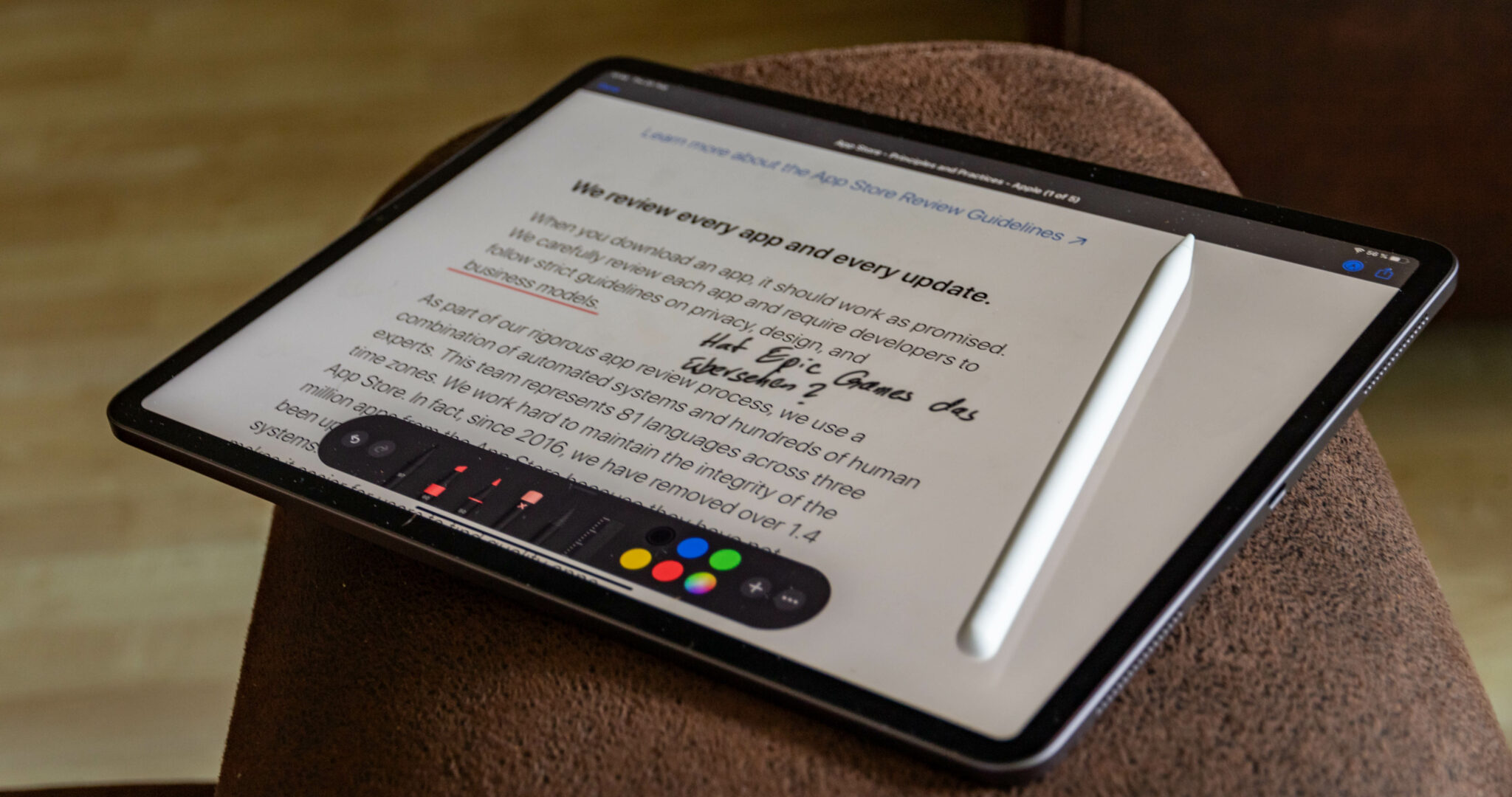 However, the sheer size of the 12.9-inch iPad Pro makes prolonged use with one hand very difficult. After a minute, the arm has to be supported somewhere or the iPad Pro has to be put down.

iPad Pro as an office laptop

Office laptops are notebooks which, in addition to the browser, also pack the classic Microsoft office applications and are more suitable for small tasks at home. Here, too, the iPad Pro does pretty well.

Regardless of whether it is a short letter to an authority in Word or a few e-mails to friends - the iPad Pro is bored with these applications. The extended universal handwriting recognition of iPadOS 14 should improve or simplify the use in connection with the Apple Pencil.

However, the Microsoft apps for the iPad have fewer functions than their PC or Mac counterparts. This is noticeable, for example, when editing a graphic or in a larger Excel spreadsheet.

Thanks to the folder structure of iPadOS, documents can be easily moved or copied. This also applies to USB sticks that are connected via docking station or dongle. Even so, we're still far from the convenience of MacOS (or Windows) here. Also, not all USB sticks were recognized smoothly during the test and some were simply ejected after a few seconds. 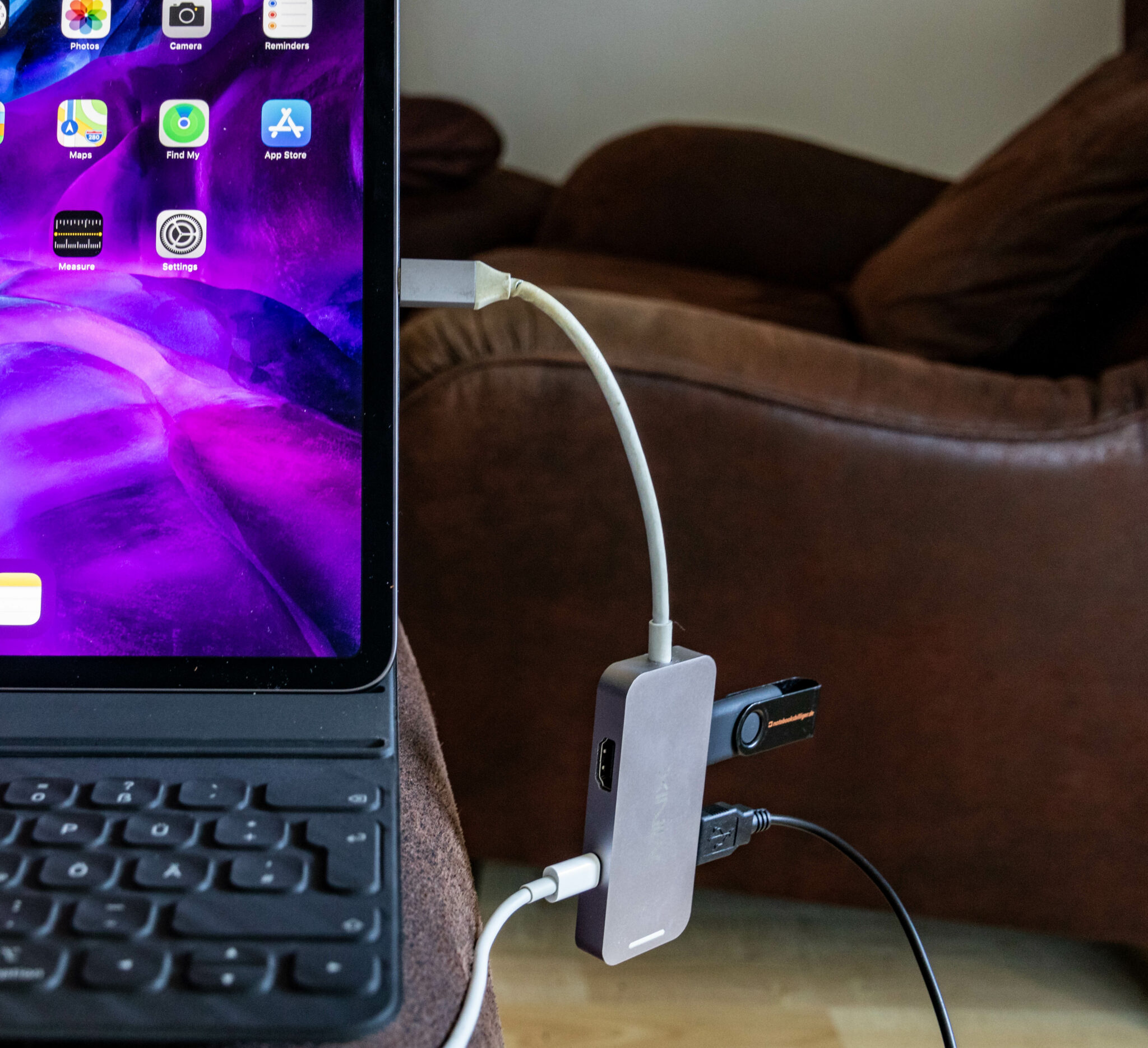 To print documents, you need a printer with AirPrint. Apple maintains a list of all available printers from Brother, Canon, Epson and other manufacturers. The list is long and so you have a good chance that your printer will be there - but it wasn't our office printer.

The iPad Pro is well suited for simple office tasks if users also have to easily adapt their workflow to the iPad Pro.

iPad Pro as a business laptop

The touchscreen and gesture control of the iPad Pro fit in intuitively into everyday office life, even if it takes some getting used to at the beginning. In the business area, however, there are additional hurdles - specifically VPNs and external servers.

While the use of a VPN app works without any problems and product management boards such as Jira can be reached, the connection to external servers still causes massive problems. Our admin reports to me that I was sometimes logged into our network drive 20 times - at the same time. At the same time, I sometimes had massive problems opening files on our NAS. So if you have to go to a company server regularly, you will run into problems here. The iPad Pro software is not (yet) ready for this.

The keyboard cover of the iPad Pro is not good enough for professional use. The keystroke is fine for short texts such as e-mails or the like, but typing on this keyboard all day is not much fun due to the lack of a precise pressure point. An external Bluetooth keyboard and mouse can help.

For this test, I decided against the new Magic Keyboard and instead opted for the Smart Folio Keyboard from Apple, since the Magic Keyboard is overpriced in my opinion at 400 € for the 12.9 "version of the iPad Pro. However, due to the new buttons, it could be better suited for everyday use and longer texts than the Folio.

The iPad Pro is not yet ready for external monitors either. While it can send a signal to a screen via its USB-C port without any problems, it cannot handle different image formats. The image of the iPad is mirrored precisely, but then only displayed in 4: 3 on 16: 9 screens - with thick borders on the left and right. With a Netflix stream, on the other hand, the entire screen is used.

The battery life of the iPad Pro works well in day-to-day work. With 7-10 hours - depending on the use of the SoC - there is enough power for a whole working day without a charger. In my case, this also includes graphics-intensive applications such as Adobe Lightroom and Photoshop.

Safari should also be highlighted very positively. Websites are automatically navigated to in the desktop view. This allows a similar workflow as with the Mac and confirming passwords via FaceID is very convenient.

The new cameras on the back of the 2020 iPad Pro take very good pictures and excellent videos. In the business sector, however, there are only a few professional groups that benefit from the new LIDAR sensor for more precise depth measurement. Mostly architects and craftsmen. For everyone else, it's more of a nice-to-have.

Conclusion iPad Pro as a laptop replacement: I would like to keep it, but ...

The new features in iPadOS allow the iPad Pro to be used well as a laptop for tasks that do not require special programs. As long as users adapt their everyday life to the intended way of working from Apple, the iPad Pro can be used as an everyday laptop, which then effortlessly transforms into the best tablet on the market in the evening hours.

For business, the tablet also offers a lot of performance, a great screen and good battery life. However, it is still useless for remote connections to servers and the classic desk (desktop) is also missing. Here Apple is welcome to cut a slice of Samsung Dex and use a graphical interface when the iPad Pro is used in "business mode" with an external monitor, keyboard and mouse. 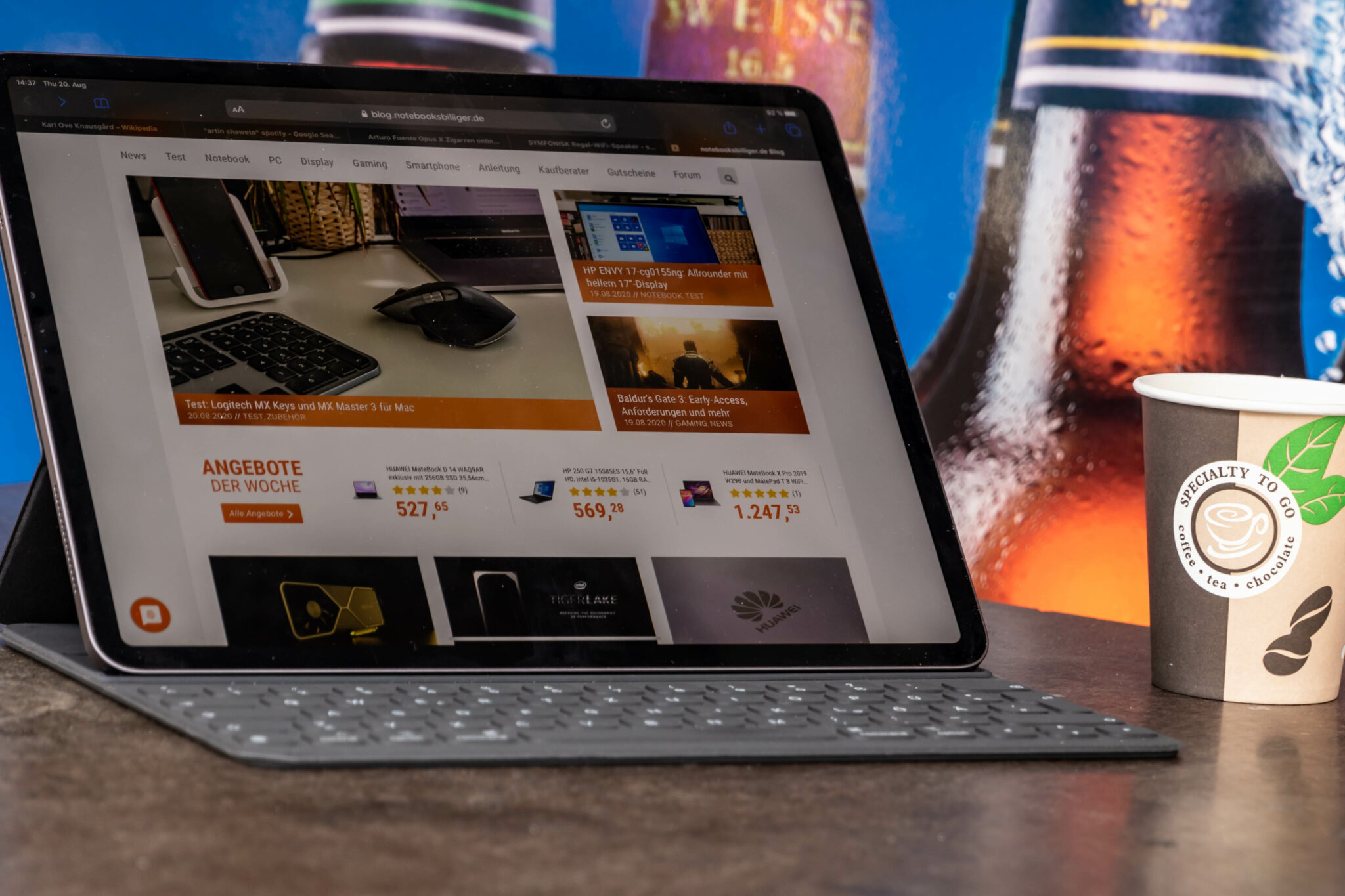 Android Police wrote something very good about Chromebooks in January 2020 and that currently also applies to the iPad Pro as a laptop replacement.

In fact, I say this as one of the few people who can do 95% of their work on a Chromebook: 5%, if you really need it, is more than enough reason to avoid a platform entirely. And for many other users it's much more than 5%: It's their entire workflow. "

The iPad Pro feels like an intermediate step. It's so much more than a normal tablet and thanks to the 12.9-inch 120Hz display and four speakers I really like to use it in everyday life, but it's just not a full replacement for a laptop because iPadOS just isn't there yet is where it clearly wants to go.