How does the law of nature work

Everyone knows: the inanimate world does not behave randomly, but follows natural laws. The question of what the laws of nature are is much more difficult to answer than it initially seems.

A few weeks ago, after a long time, I met a fellow student with whom I had studied physics many years ago. Back then we had many discussions about questions that had their origins in physics, but which in scope went far beyond physics. This included the interpretations of quantum theory as well as considerations about the possibility of free will. My former fellow students had one question long before they started their studies, as he now reported to me, and he had remained on the trail of this question throughout his professional life: What are the laws of nature and where do they come from?

At first glance, this question seems a lot simpler than it actually is. The basic phenomenon is familiar to all of us: the world around us seems to obey certain rules. If we drop a glass, we can be sure that it will accelerate towards the ground and not just fly away from time to time. This regularity, the existence of laws that determine the behavior of at least the physical world, has been a central element of the natural sciences since the late 17th century. It was René Descartes who broadened the understanding of the “lex naturae” from the previously prevalent context of moral laws to general principles of inanimate nature. In this new understanding of the laws of nature, God was the decisive legislator who directed and ordered the behavior of matter assumed to be passive. With Newton's publication of the “Philosophiæ Naturalis Principia Mathematica” in 1687, the three “Newton’s Laws” entered the world of physics, which today perhaps first come to mind as examples of typical natural laws. God is no longer formulated here as a direct impulse generator, but there are forces that can be identified as the causes of mechanical movements. 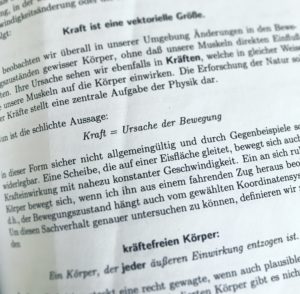 © Sibylle AnderlNewton's revolutionary insight: Movement is based on forces.

Since then, many more have been added to Newton's laws, for example Maxwell’s equations, Boyle-Mariott’s law for ideal gases, Ohm’s law and many more. The finding and the mathematical formulation of laws that make the prediction of phenomena possible is, after all, the goal of theoretical and experimental research to this day. For physicists, that's usually said enough. The fact that the search for the laws of nature is successful and serves as the basis for diverse practical applications seems unquestionable. For the philosophers, on the other hand, the riddle of the laws of nature only began with Newton. Because an obvious problem arises: we see nothing in the world of necessary connections. Everything we observe are, in themselves, disconnected individual events. Even the Newtonian forces elude our direct perception, all the more so do the asserted law-like causal relationships. David Hume took this as an opportunity to fundamentally question the existence of natural laws in the world. According to Hume, laws of nature are nothing more than a summary of regularities observed up to now, the apparent necessity of which arises only from our customary ascription.

That sounds plausible at first: what cannot be observed should not be assumed uncritically in an empirical manner. Nevertheless, this analysis runs extremely contrary to our intuition. It always seems that a car gets dented when I hit a road sign or that a surface gets warmer and warmer when it is lit by the sun. These connections obviously have little to do with our habits. Kant tried to do justice to this intuition in his Critique of Pure Reason 1781 by describing how causality, as a unifying principle of our thinking, is imposed on all phenomena. We “need” causality so that the phenomena are recognizable to us. As a form of thought, causality is a condition of the possibility of experience. Because it has the (transcendental) status of a condition, it is at the same time objective, that is, universally valid and necessary - in contrast to Hume. 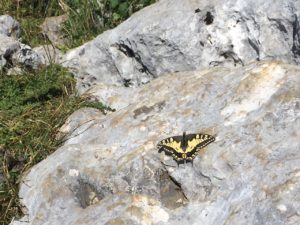 © Sibylle AnderlNot only we humans rely on the predictable consequences of sunshine.

Of course, Kant's position is extremely presupposed and thus perhaps not necessarily the type of philosophy that those interested in science want to understand natural laws, especially since our current understanding of natural laws is by no means limited to the concept of causality. In this respect, it seems worthwhile to first clarify what we call natural law today. First of all, natural laws are connected with the claim to truth. The fact that we always have to expect a cold March after a cold February can therefore not be a law of nature, because it is simply not true. In addition to the required truth, the laws of nature should also apply indefinitely in terms of space and time: The fact that all coins in my wallet on March 1, 2018 have a copper surface is true, but not a law of nature, because this statement comes with very considerable spatial and temporal restrictions.

At the same time, however, not all generally valid, true sentences are laws of nature: Neither “All bachelors are unmarried” nor “All flat triangles have an angle sum of 180 degrees” are laws of nature, because both sentences describe facts that cannot be otherwise - from grammatical and for geometric reasons. Natural laws, on the other hand, describe processes that, in principle, could also be imagined differently. For example, one could imagine a world in which all objects fly up when I drop them on the earth. Laws of nature are so interesting precisely because they give us information about relationships that cannot be taken for granted. Finally, based on the laws of nature, predictions can be made of the kind: "If I dropped this glass, it would break." Laws of nature make statements about situations that I can express in so-called counterfactual (the “if” sentence does not correspond to reality) conditional. This property is what makes laws of nature so useful in their application. 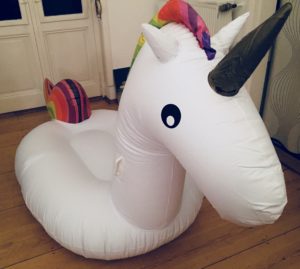 © Stefanie Michels One can make many supposed laws about what unicorns do in their free time.

And yet there are still confusing cases that seem to stand in the way of a general definition. For example Newton's first law “a force-free body remains at rest or moves in a straight line”: Since there are no force-free bodies in this world, there is, strictly speaking, nothing to which the law refers. How does this law differ from other laws that also refer to nothing (“All unicorns eat chocolate on Fridays”)? Another example that is prominent in philosophy shows that the linguistic-grammatical form of a sentence alone says absolutely nothing about whether it formulates a law of nature or not. Compare: “All gold spheres have a diameter of less than two kilometers” and “All spheres made of enriched uranium have a diameter of less than two kilometers”. Despite the impressive similarity of the two sentences and the fact that both are true according to current knowledge, only the second has legal status, because nothing would stand in the way of making a larger gold ball, such a large uranium ball would be unstable in the face of nuclear processes.

So what is it that distinguishes the two sentences? An obvious difference is that one is directly embedded in a theory, in this case quantum theory (there is a theoretical reason for this statement), the other does not. So is that what constitutes the laws of nature? Your embedding in theories? Here you immediately start a new problem, because as we know from the history of science, theories change over time - but the laws of nature do not. Philosophers have tried to solve this problem by distinguishing those theories that contain natural laws: they are those that have an optimal compromise between simplicity and far-reaching success in explaining phenomena. Newton's laws, as a borderline case of the theory of relativity, are extremely simple and still explain the entire mechanics of our everyday experience. But with this solution you have only shifted the problem, because how do you determine the existence of this optimal compromise? What does “simple” mean? What does “successful” mean? 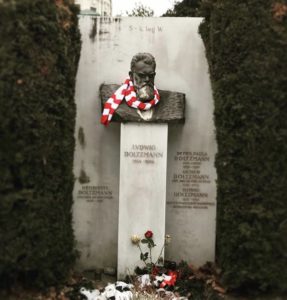 © Sibylle Anderl Ludwig Boltzmann's grave in Vienna is adorned with its concise definition of entropy: an example of a statistical law.

A very different strategy for approaching the essence of the laws of nature could be to simply see them as necessities existing in the world. This saves all threatening references and relativizations through our human scientific practice. But the question still remains: where do the laws come from? And why are they the way they are? This question becomes all the more urgent as the variety of natural laws has apparently increased massively since Newton: while classically all natural laws were viewed as causal (if the initial state is sufficiently known, the future of the system can be precisely predicted), thermodynamics has introduced statistical laws (pressure and Temperature of a gas are, for example, quantities for the definition of which one does not need to know the properties of all gas particles), there are phenomenological laws (e.g. Hook's law, which describes the restoring force of a spring as proportional to the elongation) and, with quantum theory, probabilistic ones too Laws.

Quantum theory in particular has fundamentally changed the character of the laws of nature: After all, it is no longer possible here to precisely predict the development of all properties of an electron, for example, on the basis of known initial conditions. What quantum theory provides are the probabilities of finding the particle in a certain state during a measurement. Which state is actually measured is indefinite beyond these probabilities. The interpretation of what happens in the course of a quantum mechanical measurement is still controversial. And so the question of the essence of the laws of nature leads into philosophy on the lowest scale level of our description of nature.

By the way, my college friend found a solution to the question of the origin of the laws of nature, but it is so complicated that a separate article has to be devoted to it. At least at our last meeting, as in the old days, we philosophized “physically” for a long time - even though the concept of natural law sounds so simple.

What is a law of nature?

Everyone knows: the inanimate world does not behave irregularly, but follows natural laws. The philosophical question of what natural laws are is much more difficult to answer than it initially appears.