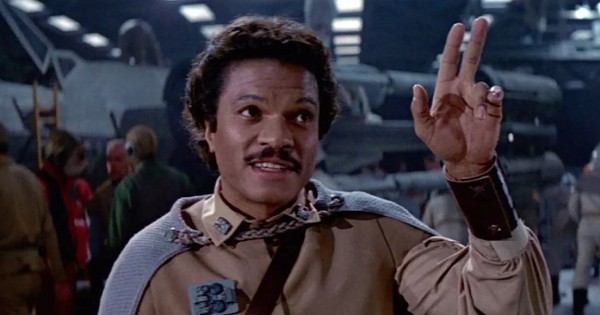 Billy Dee Williams as Lando Calrissian in the 1983 movie "Return of the Jedi" (Image: Lucasfilm)

Jump to update: Williams not gender fluid: his comments were misunderstood (5.12.)

The 82-year-old is best known for his portrayal of Lando Calrissian in the "Star Wars" films "The Empire Strikes Back" (1980) and "The Return of the Jedi Knights" (1983). In the new blockbuster "Star Wars: The Rise of Skywalker" Williams will be back in the role for the first time in 36 years. The film will be shown in German cinemas from December 18th.

Actor Donald Glover, who plays the young Lando Calrissian in the film "Solo: A Star Wars Story", made headlines last year. Glover had declared at the start of the film that Calrissian was pansexual (queer.de reported). The 36-year-old actor and singer (Childish Gambino) justified this with the fact that Billy Dee Williams had brought "fluidity" into the portrayal of the character. And anyway, "How can you not be pansexual in space?" Asked Glover.

Williams was apparently unaware of Glover's statement prior to the "Esquire" interview. When asked about this, the 82-year-old said: "Really? The little one is brilliant - just watch his videos." He referred to Glover's megahit "This Is America".

Williams has played in many successful movies and TV productions in his decades-long career, including "Friends until Death" (1971), "Nachtfalken" (1981) and "Batman" (1989). He should also be known to German viewers from his "Trabbi goes to Hollywood" (1991) with Thomas Gottschalk. This film did not earn him any critical praise - in US newspapers the comedy was referred to as a "stupid movie". In addition to his acting, Williams also works as a singer and painter.

Several other stars have already come out non-binary, including Sam Smith and Jonathan Van Ness. (dk)

The actor feels misunderstood in an interview with the "New York Times" (see queer.de article).