Which element has the chemical symbol C.

Our entire world, all living things and we ourselves are made up of chemical elements made up of protons, neutrons and electrons. What elements are there? How did they come about? What are their characteristics? This article gives a brief introduction to this fascinating topic, the structure of matter

Our earth, nature, all living beings, objects, the continents, mountains, seas and ourselves consist of chemical elements that are connected to one another in different ways. Life came into being through the connection of the elements.

The simplest element is hydrogen (H) with one proton and one electron (atomic number 1, excluding neutrons). Pure substances are also referred to as elements, for example pure oxygen. They cannot be further divided with simple chemical and physical methods. Elements can be solid, gaseous or, less often, liquid (physical states). Over 94 elements occur naturally and many more are artificially made.

Composition of the elements

The individual chemical elements are composed of positively charged protons, neutral neutrons and negatively charged electrons. The atomic nucleus consists of protons and neutrons which are collectively referred to as nucleons, the electrons are in the atomic shell (electron shell).

The number of protons and electrons are the same for uncharged atoms. Because the charges are balanced, the elements are electrically neutral to the outside. However, if they give up an electron, they are positively charged (cations). If they pick up one, they are negatively charged (anions). Charged atoms are called ions. Together they form salts. 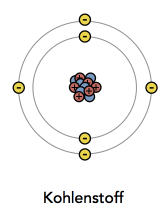 Isotopes are atoms that differ only in the number of neutrons and therefore also in their mass. This with the same number of protons. For example, deuterium (2H) an isotope of hydrogen (1H) with a neutron. Because the mass is greater, deuterium (D) is called heavy hydrogen and deuterium oxide is called heavy water (D2O). The most well-known isotopes include the uranium isotopes, the atomic nuclei of which are fissile (uranium-235) and which are used in nuclear power plants and for the manufacture of nuclear weapons and propulsion systems.

Origin of the elements

The simplest elements hydrogen (Z = 1) and helium (Z = 2) were formed 13.8 billion years ago during the Big Bang shortly after the creation of our universe. In today's vast universe, hydrogen is still the most common element, followed by helium.

Most of the other elements were created either in stars by nuclear fusion or in a supernova, in dying stars. A few emerged from the influence of cosmic rays (lithium, beryllium, boron). After all, there are elements with a high atomic number that have been artificially produced by humans.

The following list shows a selection of elements. That’s in the brackets chemical symbol (Element symbol), for example C (carbon, from lat. carbo, Coal) for carbon. The abbreviation has either one or two letters.

Almost the entire mass of an atom is in the nucleus. The volume, however, is determined by the electron shell, because the nucleus is very small.

The mass of a proton and a neutron is about 1 u, which is one unit of measurement. Because carbon-12 contains 6 protons and 6 neutrons, and the electrons have a very low mass (1/1836 of a proton), its atomic mass is about 12 u (12,011 u). This number is called the mass number A. designated.

The molecular weight of chemical compounds can be obtained by adding the atomic weights of the atoms that make them up.

Chemical elements like to combine with the same or other elements - pure or unbound they rarely occur. The electrons in the atomic shell are solely responsible for the chemical compounds; the atomic nuclei are not involved.

The most important chemical compounds are:

The special thing about chemical compounds is that their properties are completely different from those of the elements they are made of. For example, sodium chloride is made up of ionized sodium and chlorine atoms. Sodium as an element is a soft, silver-gray metal that is highly reactive and chlorine is a poisonous gas (at room temperature). Together they form the crystalline table salt that we consume daily as a flavor enhancer in food. The same can be illustrated using the example of water, which is formed from the gases hydrogen and oxygen in the oxyhydrogen reaction.

The periodic table of the elements is a clear and practical overview of all elements, which was first developed in the 1860s. It starts with hydrogen (1) and is sorted by increasing atomic number. The representation in horizontal periods and vertical groups summarizes related elements with similar chemical and physical properties. This includes:

Indivisibility of the elements

Elements can be obtained from mixtures that are subjected to various chemical and physical separation processes, for example combustion, an electrical current or acidification. At the end of the day, the common methods are left with the pure elements.

The term atom is derived from the Greek atomos ab, which means indivisible. In fact, the elements are no longer divisible using common chemical methods. With the discovery of radioactivity and radioactive decay, however, it has been shown that the term is incorrect and a so-called nuclear fission into elements with a lower atomic number is possible. Conversely, elements with a higher atomic number can be produced in a nuclear fusion. For example, the sun creates helium from hydrogen in its core, which releases the energy and heat that is the basis of all life on earth.

As already mentioned at the beginning, we humans are also made up of the familiar elements. The most important representatives are oxygen (O), carbon (C), hydrogen (H), nitrogen (N), calcium (Ca) and phosphorus (P). These 6 elements together make up over 99% of the body mass!

Other minerals such as potassium, magnesium and sodium as well as numerous trace elements such as chromium, iron, fluorine, selenium or copper are contained in much smaller quantities, but they have vital functions.

Origin of life on earth

As already mentioned, the elements on earth originate on the one hand from the Big Bang, which took place around 13.8 billion years ago and with which the universe, space and time came into being. Higher elements were mainly formed in active and dying stars (supernovae). The earth is about 4.5 billion years old.

Life on earth emerged spontaneously from inanimate nature perhaps 4 billion years ago through the combination of the elements to form organic chemical compounds. These reactions have mainly taken place in water, because insufficient chemical reactions take place in solids or gases. Studies such as the Miller-Urey experiment from the 1950s have shown that biomolecules such as amino acids or nucleic acids can form from simpler compounds in nature.

Central to the transition from the inanimate to the living earth was the emergence of multiplying polymeric molecules from monomers. These contain the information for the sequence in their structure. It is assumed that it was first ribonucleic acid (RNA), which catalyzed its reproduction itself. As soon as molecules replicated themselves, evolution began, leading to increasing complexity, to single-celled and multicellular organisms, plants, fungi, animals and, after an unimaginably long time, humans.

Conflicts of Interest: None / Independent. The author has no relationships with the manufacturers and is not involved in the sale of the products mentioned.

Support PharmaWiki with a donation!

© PharmaWiki 2007-2021 - PharmaWiki provides independent and reliable information about medication and health.
This article was last changed on April 19, 2021.
Imprint and data protection declaration
Show products for this page
<?