How do servals differ from savannah cats

The savannah cat is a cross between a domestic cat and an African serval. It is an extremely intelligent and sociable animal, but due to the genes of its wild ancestor, it is not easy to train. He may be a wonderful friend, but he needs an experienced caregiver.

Savannah cats are a very young breed. Their breeding began only in the 1990s of the 20th century. So far it has only been fully recognized by the International Association of Cats (TICA), which set the standard for this breed. It is not recognized by the FiFe. 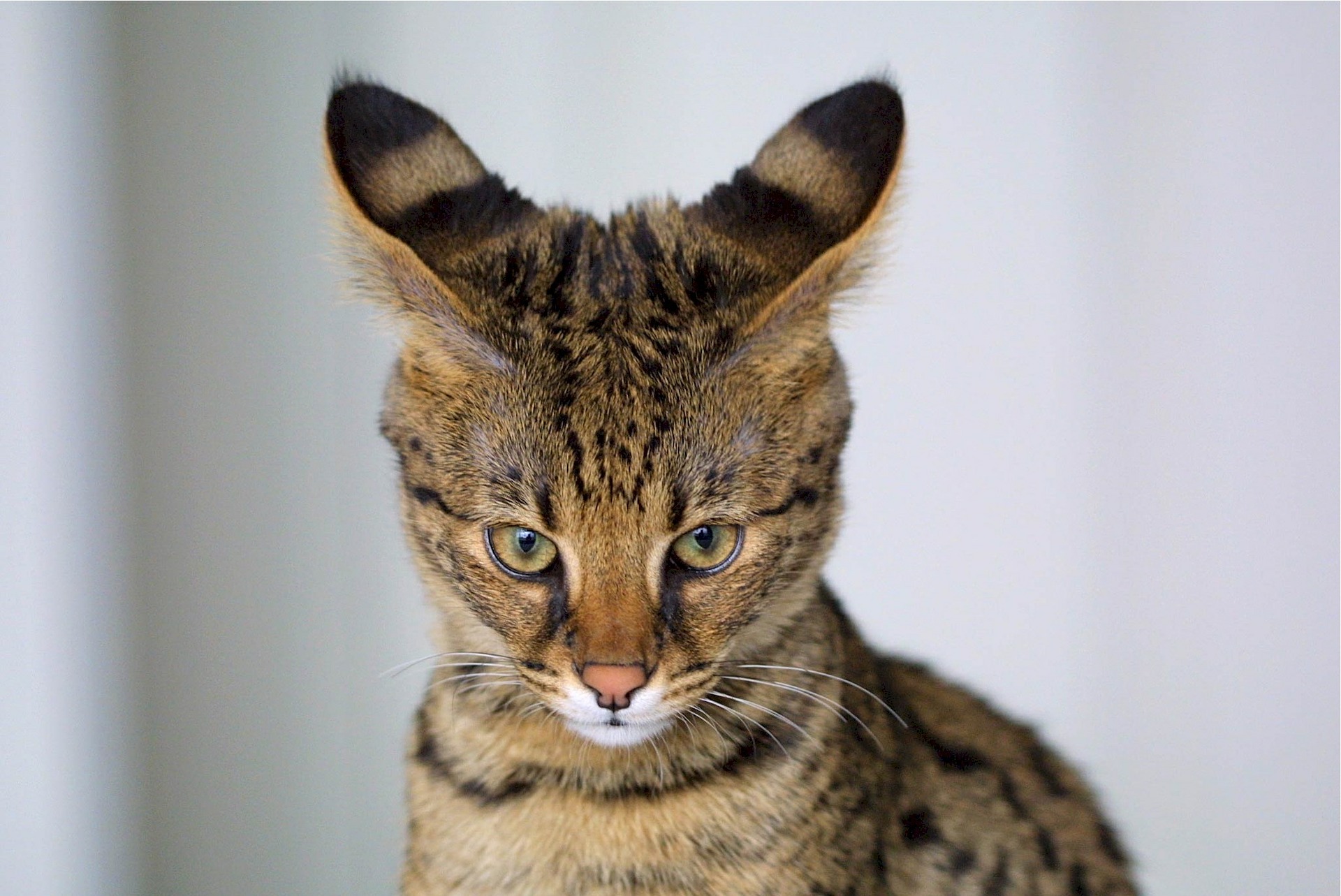 Origin of the savannah cats

The idea behind creating this breed was to breed a cat that resembles the appearance of a wild serval, but with a predisposition to be a domestic cat. The first such cross was achieved in 1986 in the United States by crossing the serval with a Siamese cat. The kitten inherited from the mother - Seal Point fur - and from the father - dots. His name, Savannah, gave a name to the whole race. Individual individuals have different degrees of affinity for the serval (denoted by symbols from F1 upwards). Generations up to F4 have a very large admixture of wild genes, are considered hybrid breeds and may not be kept at home. Savannah cats can therefore differ in appearance and character.

The shape of the savannah cat

Savannah cats are exceptionally large - Hangovers can weigh up to 12 kg. Their size depends on the degree of kinship with wild offspring - the more closely related, the larger. These animals are slender, muscular, with unusually long limbs (hind legs slightly longer than the front legs) and an average tail length. They have a relatively small head in the shape of a triangle that becomes slimmer in the lower direction. Large, high-set ears are slightly rounded at the ends. There are bright spots on their back, called ocelli, that resemble a thumbprint. Savannah cats have medium-sized eyes (usually yellow or green) that set under slightly protruding eyebrow arches. The animal's large nose is equipped with wide nostrils.

Savannah cats can have short to medium length hair that is quite rough to the touch (although it has a soft undercoat) and lies close to the body. The colors recognized by TICA are ..:

The polka dots of this breed have a clear, oval or elongated shape.

Character of the savannah cats

Savannah cats are an extremely intelligent breed. They quickly learn all sorts of "tricks" (including fetching), and because they are also extremely curious and ubiquitous, they have mastered the art of opening closets, for example, which requires the installation of many security devices at home. Savannah are very active. They have a strong hunting instinct, they are agile, they like to play. They are also ready to go for a walk, so in the case of this breed, it is worth getting harness and a long leash. In a house, these animals need a lot of space and a corresponding infrastructure, such as compartments, tunnels, scratches. It is also necessary to appropriately secure the balcony for this breed. 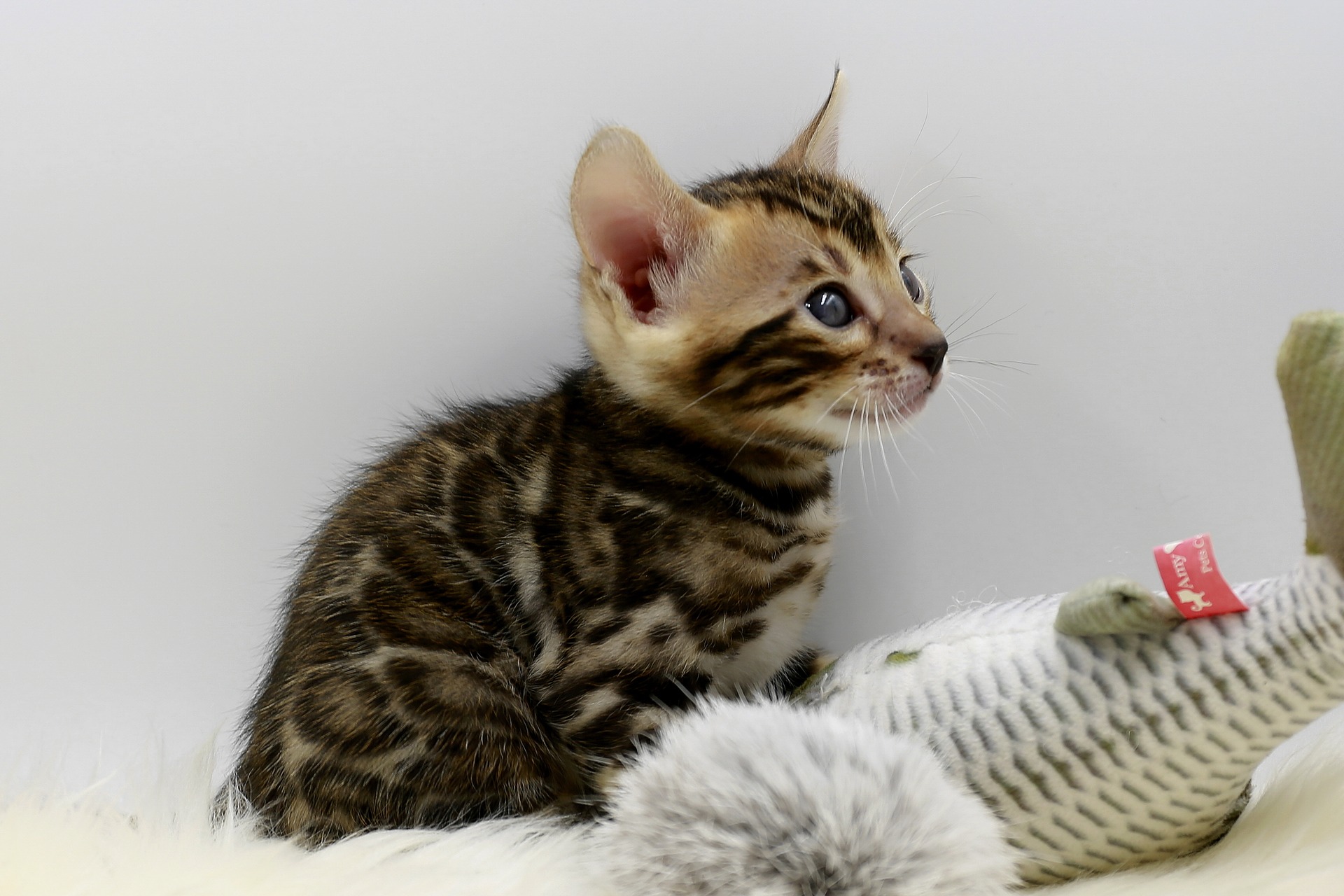 Savannah cats are very friendly. Although they are not one of those cats who like to lie on the caretaker's lap, they are very attached to him and spontaneously show him their feelings. They are faithful companions of the daily activities and hate saying goodbye to the supervisor. You will also find yourself in good company with other animals.

Breeding these cats (especially the early generations - F1-F3) requires a lot of experience from the zookeeper. During socialization, animals endowed with wild genes can behave unpredictably, and adult animals may not always obey. It is important to pay a lot of attention to raising and handling your cat in the early years. Under no circumstances should you play with your hands and legs with kittens. The chase games should also be replaced with another type of activity. This breed is not suitable for contact with young children. These cats are very demanding, get bored easily and can then display destructive and aggressive behavior.

Savannah cats enjoy long lives (12-20 years), good health, and disease resistance. Nonetheless, in addition to the diseases that occur in all young animals, these animals can be affected by breed-specific diseases:

The most serious health problem for these cats is their reproduction. Due to the specific crossbreeding of genes, cats are sometimes sterile, have difficulty terminating pregnancies happily, and the litters are small. Kittens are often stillborn.

Savannah cats are easy to care for. You lose relatively little hair and do not have to be combed more than once a week. As with all domestic cats, it is worthwhile to cut their claws regularly with the appropriate pliers for this purpose and to check their ears. Since they are very active, they need a lot of energy and good food quality - preferably wet, grain-free, with a high meat content. The BARF diet is also acceptable, but remember that this diet requires a lot of attention, knowledge, and constant training. Cats that get less exercise can gain weight quickly. So when choosing a high-energy food, you should dedicate a lot of time to your cat.