It is worth buying the iPhone 4S

iPhone 4 users: Switching to the iPhone 4S is not worth it 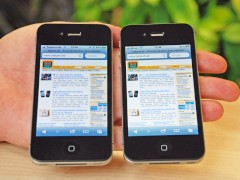 IPhone 4 on the left, iPhone 4S on the right
Image: teltarif.de The Apple iPhone 4S has been available in Germany for a week. In addition to new prospects, the new multimedia smartphone is naturally also exciting for users who have already made calls with a cell phone from the Cupertino manufacturer. While previous users of an iPhone 3G or iPhone 3G S get a significantly faster processor, a better camera, a high-resolution display and, last but not least, a fresh battery with the iPhone 4S, the question arises, especially for owners of the iPhone 4, whether a change is possible on the new iPhone generation is worth it. We have been investigating this question over the past few days and have restored an iPhone 4S with a backup of an iPhone 4 in order to be able to use two identically equipped devices at the same time.

Only slight difference in speed

IPhone 4 on the left, iPhone 4S on the right
Image: teltarif.de Advantage of the iPhone 4S: It comes in an almost identical housing as the iPhone 4. Thus, the accessories of the iPhone 4 or the holder in the car also fit. The display of the two devices is the same, while the newer iPhone model has a dual-core processor on board, which is only clocked at 800 MHz. In a direct comparison, some applications start slightly faster on the iPhone 4S than on the iPhone 4. In daily use, however, this difference in the operation of the cell phone is minimal and therefore hardly or not noticeable. If you don't know which device you are currently holding in your hand, you cannot determine it with certainty based on the speed alone, so we always had to check in our tests which device we are currently holding in our hands. There are currently no games or programs specially adapted for the new processor.

Camera comparison
iPhone 4S, Nikon D80 and iPhone 4
Large picture with a click on the picture.
Image: teltarif.de Another innovation is the camera: the iPhone 4S has an 8-megapixel camera on board, while the camera of the iPhone 4 only has 5 megapixels. In addition, the camera technology has been improved so that better photo quality is to be achieved, especially in poor lighting conditions. In contrast, nothing has changed in the way the cameras are operated. We therefore compared the cameras directly with one another and found no major difference to the iPhone 4 camera here either.

UMTS interface faster - but who benefits from it?

In the new iPhone model, a UMTS interface has been installed for the first time, which enables data transfer rates via HSPA of up to 14.4 Mbit / s. The iPhone 4 achieved a maximum of 7.2 Mbit / s in the downstream. At first glance, this may be an advantage - especially if the smartphone is also to serve as a mobile hotspot for a netbook or notebook. However, the cellular networks are currently only designed for faster transmission rates than 7.2 Mbit / s at a few hotspots and most contracts and prepaid cards do not allow faster data connections. 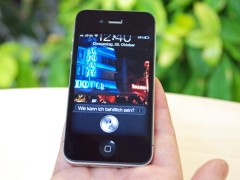 Siri on the iPhone 4S
Image: teltarif.de Then there's the Siri voice assistant as a new feature: In everyday life, the question arises whether you want to hold your iPhone to your ear in public and say loudly "Call John Doe privately" or rather as usual want to search for and dial the number using the touchscreen. In the latter case, at least the people around you don't know who you're talking to on the phone. The same applies to driving in the car, where the cell phone is operated via the integrated hands-free system rather than via Siri. The first contact with Siri was particularly disappointing, because the attempt to activate Bluetooth via Siri failed with the words "I don't know what you mean by" activate Bluetooth ".

Siri has so far only offered a few features, especially when used in German instead of English, as our test on Siri shows. Apple promises to expand the scope of services in the future. It remains to be seen which features may be added later. At the moment, Siri is no reason to spend between 629 and 849 euros on a new device if the iPhone 4 is already in use.

iPhone 4 vs. iPhone 4S
Image: teltarif.de What remains is the new battery, the better UMTS reception and the possible doubled storage space in the current iPhone model. As shown in our test, the battery in the iPhone 4S is by no means better than the power source of the previous model. The performance is roughly comparable. UMTS reception, on the other hand, clearly benefits from the new antenna design. However, if you have got used to a bumper or know how to hold your iPhone 4 in order not to have to accept any loss of quality, you don't need the new mobile phone model either. Whether 64 GB of storage space can be a reason to buy a new smartphone that costs 849 euros without a contract is something every user has to decide for himself.

Conclusion: The iPhone 4 is still up to date 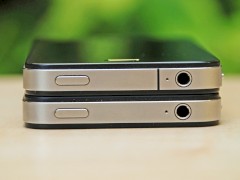 iPhone 4 vs. iPhone 4S
Image: teltarif.de Our examples show: Anyone who already has an iPhone 4 can continue to use it and - if it absolutely has to be an Apple smartphone - wait for an iPhone 5. The innovations that the iPhone 4S brings with it are comparatively small and do not justify buying a new device in the price range of the iPhone.

The iPhone 5, which is expected in the coming year, on the other hand, could really offer numerous innovations again. The change from the iPhone 3G to the iPhone 3G S two years ago was only a minor update, while Apple completely renewed the design of its smartphone with the iPhone 4. If the manufacturer remains true to this two-year cycle, the cell phone model expected next year can be expected to be completely overhauled again.