Penicillin was invented in the 20th century

Antibiotics - the medical revolution in the 20th century 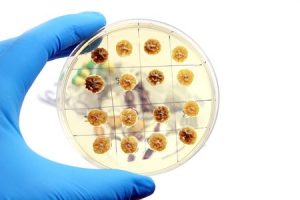 If you read instructions for the treatment of some diseases 100 or 150 years ago today, you probably shake your head slightly. In the 19th century, tuberculosis was classified as a hereditary disease and attempts were made to cure it with fresh air cures. It was not until the late 19th and early 20th centuries that medical research had advanced so far that the researcher Robert Koch was able to identify the mycobacterium tuberculosis as the causative agent of the disease in 1882.

While some of the medical breakthroughs of this period were the result of research and targeted experimentation, other discoveries were made more by accident. In 1905 the causative agent of syphilis could be traced back to the bacterium Treponema pallidum. Based on the previous research work of the French physician Antoine Béchamp, the Jewish doctor Paul Ehrlich finally explored the substance arsphenamine in numerous laboratory tests, which specifically fought the bacterium Treponema pallidum without any significant side effects for the patient. He had developed the first antibiotic, an enormous achievement in medical history. In 1910 the drug came on the market under the name "Salvarsan".

The cure for deadly infectious diseases

This means that previously incurable infectious diseases can now be treated without major risks. For example, the cure for people suffering from syphilis consisted of rubbing them with mercury. Often times, this treatment resulted in hair loss and loss of teeth, and the patient often died from the side effects rather than the ailments. The disease had been rampant across Europe since the Middle Ages and did not stop at any social class. Well-known victims were Frédéric Chopin, Ludwig van Beethoven and Oscar Wilde.

Thanks to the discovery of the antibiotic, other diseases such as tuberculosis, diphtheria and cholera are now largely eradicated in our latitudes. In the 19th century they were still widespread in metropolitan areas with poor hygienic conditions and malnutrition. By combating them with antibiotics, germs have become more and more resistant over time. That is why the Center for Infection Research in Germany is constantly researching newer antibiotics.

Paul Ehrlich received very little recognition for his discovery during his lifetime. He died just 5 years after the antibiotic he discovered hit the market. Due to his Jewish origins, however, he was not recognized for his work in Germany for a long time.

Much better known in connection with the discovery of an antibacterial agent is the Scottish physician Alexander Fleming, who came across the agent penicillin almost 20 years later by chance. He found some samples of bacteria moldy, and he discovered that the mold was killing bacteria. However, he did not use his discovery for medicine. Another 10 years would pass before the researchers Howard W. Florey and Ernst B. Chain came across Fleming's research results in their systematic search for bacteria-killing substances. It was not until 1941 that the first person was treated with penicillin before the drug became available to the general public in the early 1940s. In 1945 Fleming, Chain and Florey received the Nobel Prize for their discovery.

The discoverer of the first antibiotic, Paul Ehrlich, was not recognized for his work until half a century after his death. For a long time, his face was depicted on the 200 DM note.

This article was written by a Advertising partner made available.