What's your rating of Fitbit Flex

I gave myself six weeks for the Fitbit Flex 2 test - enough time to share my report with you. The fitness armband, presented in time for the IFA 2016 in Berlin, is the smallest fitness armband from Fitbit to date. However, not only the size is remarkable, but also its versatility and the fact that it is the first waterproof fitness tracker from Fitbit. You can find out what else there is to report here.

Alta, Charge 2, Blaze - all fitness wristbands of the newer generation from Fitbit somehow share one and the same packaging design. As a result, there are no more surprises to be expected when you open the small white box. 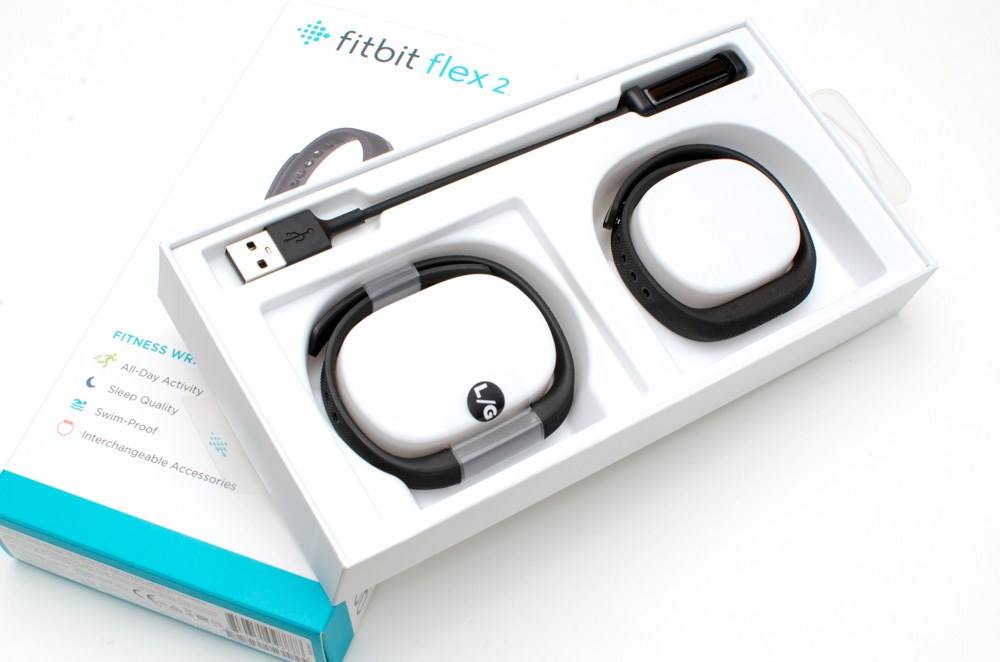 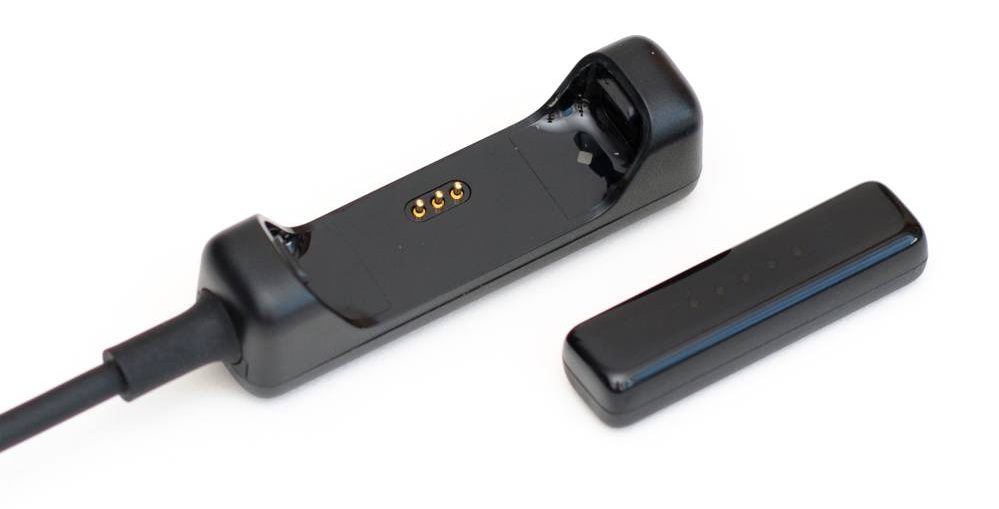 In the packaging you will find a few brief information and warranty information, but behind a box there is also a second silicone bracelet in size M / L. This is surprising to the extent that Fitbit has so far exclusively sold the different sizes - only the Flex 2 comes with wristbands in two sizes.

If you hold the Flex 2 in your hand, you quickly notice that it is not only the smallest, but also the least complex product from Fitbit. Of course, it is also by far the lightest fitness tracker from Fitbit. If you only hold the tracking unit in your hand, you will not feel the small device at all. You won't feel the Flex 2 even when it is wrapped in the bracelet on your wrist. 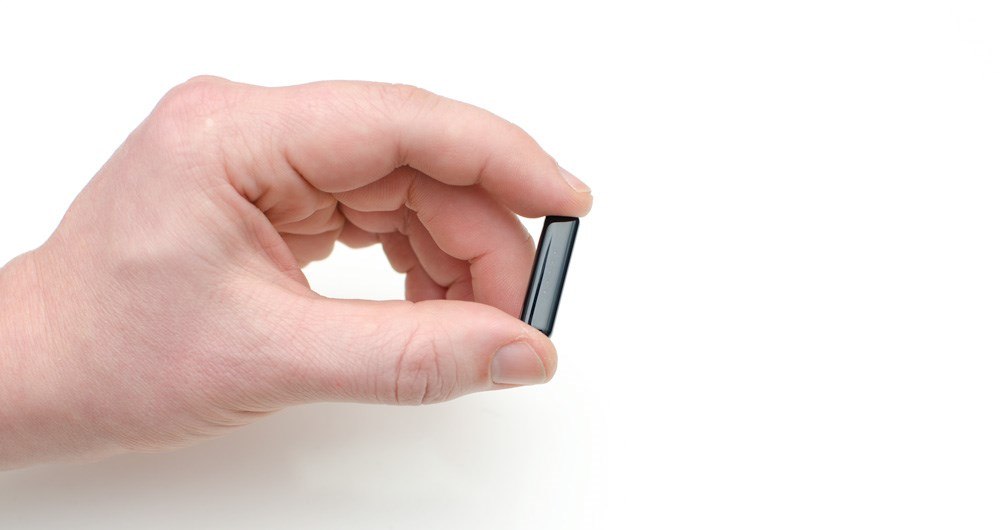 The Flex 2 has no buttons and no display. Just five tiny LEDs and a small vibration motor are the only ways of direct communication with the user. 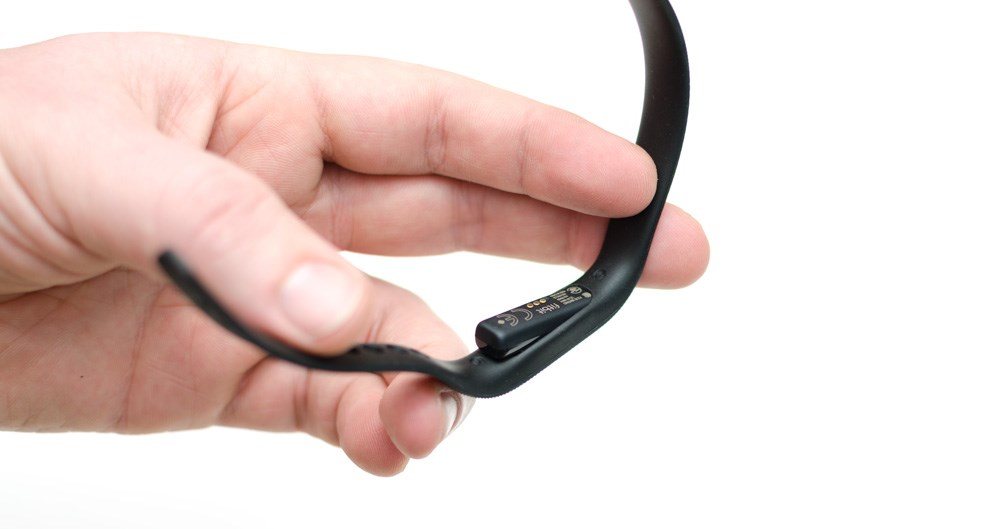 Admittedly, the potential of most fitness bracelets and sports watches only becomes apparent when you look at the associated app, but limited to the fitness tracker itself, the possibilities of the Flex 2 are rather cautious. 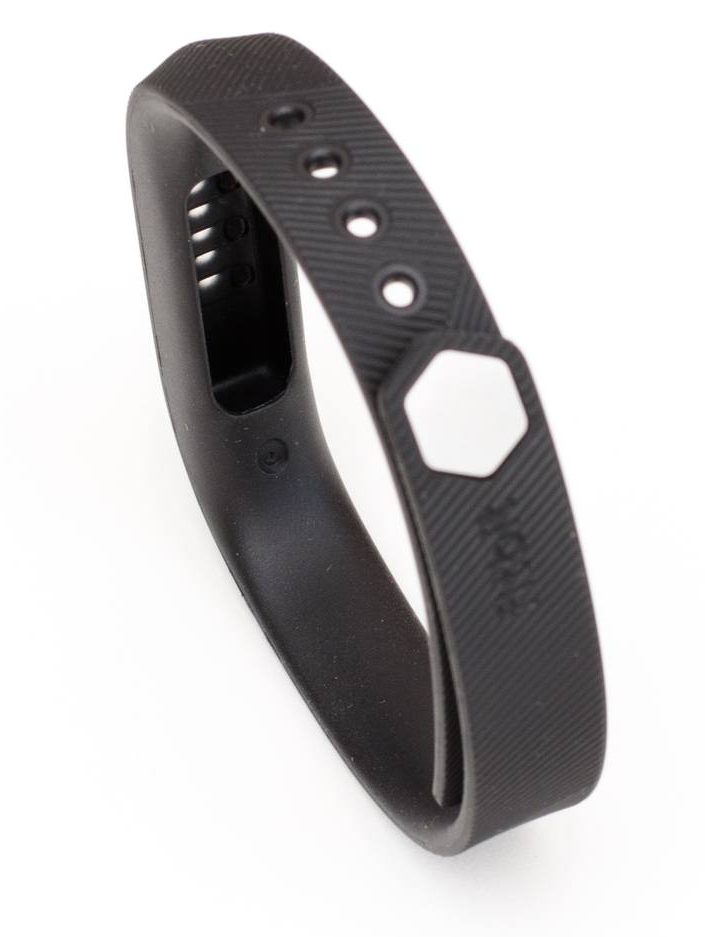 The two silicone bracelets supplied are in the same price range: the material quickly attracts dust and lint after unpacking and looks rather grayish after a short time. However, the "attraction" subsides after a few days. The advantage is that the Flex 2 is waterproof and the wristband and tracking unit can be rinsed together under the tap. The light hatching of the armband is just as advantageous when dealing with water. It is therefore sufficiently handy even with wet hands.

Once closed, the clasp of the bracelet is quite tight and closing it takes skill and strength in the first few days. Of course, over time, the metal clasp in the silicone bracelet creates space and it is easier to open and close. So far, however, I have not had the feeling that the bracelet will become independent at some point.

All in all, the points don't make me sad, because the great advantage of the Flex 2 is its size, which makes it appear extremely inconspicuous. In any case, it doesn't look like a watch. More like a friendship bracelet or a bangle. It can also be worn next to a real watch without any problems. Since there is no optics for measuring the heart rate, the bracelet can also be worn loosely. A close concern is not necessary.

All in all, a fitness tracker that does not attract much attention - neither visually nor in terms of functionality.

Five tiny LEDs and a small vibration motor mean that the vocabulary of the Flex 2 is limited and you as a user first have to understand and learn what the Flex 2 wants to say to you when one LED lights up blue and the remaining white LEDs pulsate one after the other. In total, however, there are only six different pieces of information that the Flex 2 can convey in this way.

On the way to the goal of the day

The beginning of learning is pretty easy. If you tap the Flex 2 twice, up to four of the white LEDs light up, indicating how close you are to achieving your daily goal. One lamp corresponds to 25 percent.

A somewhat rough subdivision, but the bracelet is also more intended for those who do not have to constantly monitor their progress on their wrist. The data is of course prepared in much more detail in the app. But then it is enough to look at it at the end of the day.

If you want to check your values ​​more often, you have to use your smartphone more often or use a fitness bracelet with a display.

After a short time the lights go out again.

Even the Flex 2 is able to notify the user of incoming calls and text messages. The colored LED lights up in blue, while the white LEDs show different flashing patterns.

Somehow, however, the solution doesn't completely convince me. Undoubtedly, I hear more often that a message has been received on my smartphone. Without being able to briefly check the content or sender on my wrist, I have to pick up the phone. Actually something that I would like to save myself. In this respect, the notification does not offer the same convenience as with fitness wristbands or smartwatches with a display. But of course I'm used to the comfort (e.g. a Fitbit Blaze) that shows the messages on the display. Of course, the notification function of the Flex 2 still has its right to exist.

The vibration strength of the bracelet has a very pleasant character, because it is strong enough to attract attention without attracting attention.

I am aware that I move far too little in everyday life. It becomes even more conscious when one is constantly reminded of how little one has done. The Flex 2 ensures the corresponding, guilty conscience when it checks ten minutes before every full hour whether sufficient steps have been taken. If this is not the case, the bracelet will vibrate briefly and indicate with a purple glow that a few more steps would do you good.

The app then shows the hours of the day when you reached your target. And to be honest, 250 steps per hour are a piece of cake - unfortunately, they are often not taken when working at the desk. Personally, I really like the function (which can now be found in all current Fitbit fitness bracelets).

The reminder to move has another effect: You notice how quickly time flies when you are sitting and working at the PC. After eight hums on your wrist, it's time to go home.

Thanks to the vibration motor, the Flex 2 also has a silent alarm. I have to admit that I only used the alarm to test the Flex 2. Just to try it out and you can see that it works. I'm not sure whether the little vibration motor would wake me up every morning. As a reminder during the day, the question does not arise - here you can clearly perceive the vibration.

Flexibility of the Flex 2

What makes the Flex 2 special is its size, which ultimately also allows the fitness tracker to be worn as a bracelet, in the form of a bracelet or a pendant. 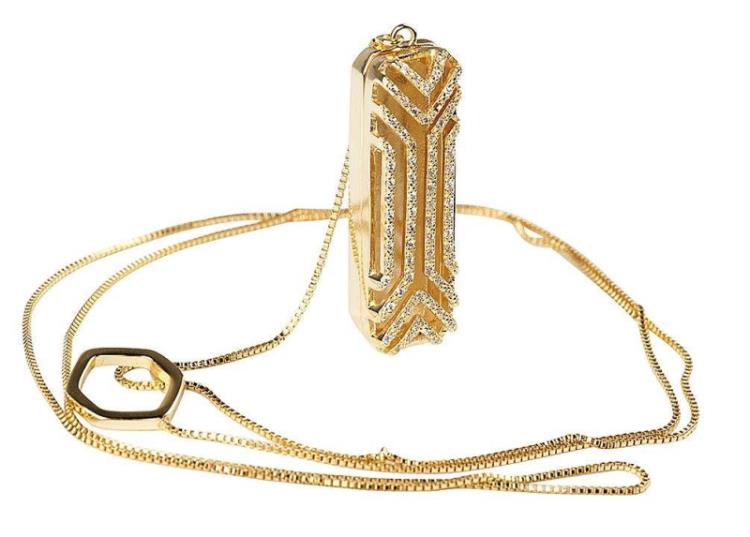 It certainly does not change anything in the scope of the Flex 2 itself, but is still a strong selling point, because there are many who ask for alternative shapes and Fitbit is one of the few manufacturers that has a variety of bracelets, bangles and chains in its range. 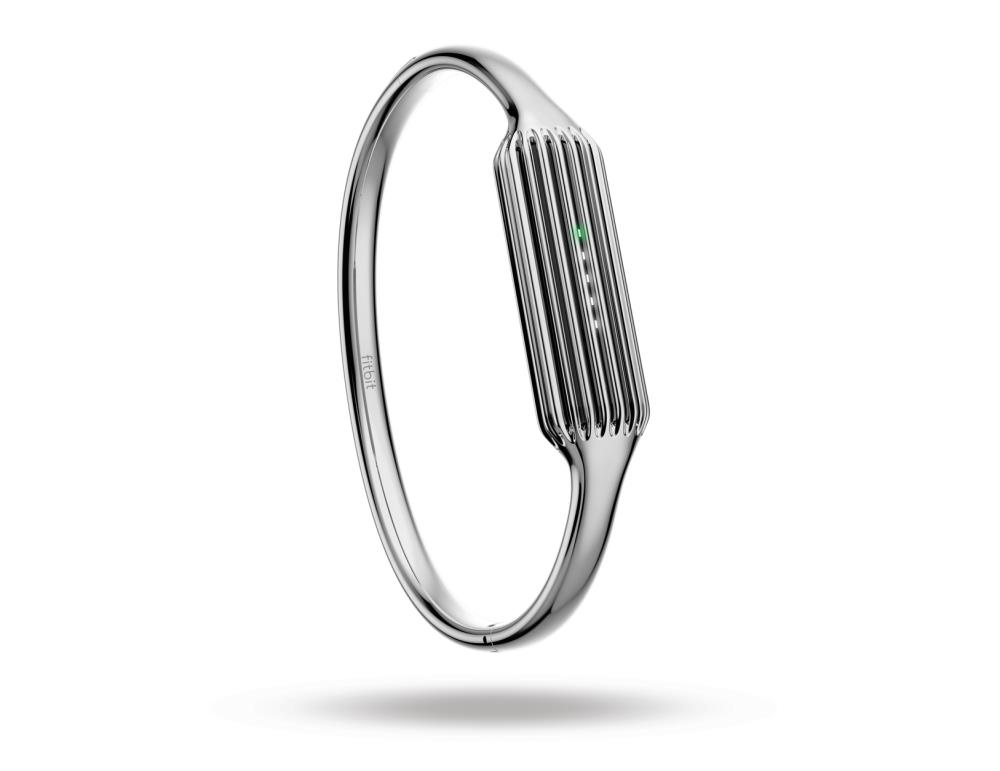 For me as a man, the alternatives offered are nothing - at least not for my wrist or my neck. My wife, however, was enthusiastic that the possibility existed at all. Especially for everyday life, not everyone likes to wear the more sporty silicone versions and my wife has so far rejected a fitness tracker due to its sporty look.

Even after six weeks of use, it is difficult to make a general statement about the Flex 2. In order to really classify it, I believe that you have to look at it a little more differently.

The Flex 2 is an unobtrusive fitness bracelet that knows how to please with its simplicity in appearance and ease of use. It is actually this withdrawnness that makes it interesting to some. Against this background, however, it only offers a comparatively small range of functions. If you are satisfied with that, you will find the Fitbit Flex 2 to be of great pleasure.

Even if the range of functions is limited, its small size still shows its strength in sport, because you can trust yourself to wear a bracelet even in situations in which watches or bracelets are prohibited because they are too large Pose a risk of injury.

If you expect a little more from your fitness bracelet in the medium and long term, you may be disappointed by the Flex 2. At best, it can then be seen as a supplement or as an alternative bracelet for water sports.

I belong more to the second category and after just 4 weeks I was wearing the Flex 2 in addition to a fitness bracelet with a display. The time and notifications on the display are more important to me than assumed. Since I rarely go swimming, the scope of services is too low or not applicable for me. For someone else, the Flex 2 may be the perfect fitness tracker.

Advertising: At my request, the product was made available to me free of charge by Fitbit for testing the Fitbit Flex 2. No conditions were attached to the reporting. The content of the review therefore fully reflects my own, unbiased opinion and experience with the product.

You can read why the post is still marked as 'advertising' under Obligation to label.