Roller coaster of emotions: The 7 phases of life crises

Nobody strikes harder than life. We know that life crises are somehow part of life. But when it really strikes, it throws many off the beaten track. They feel the crisis like a slap in the face, feel their anger and powerlessness, quarrel with their fate and gnaw at the loss of control. Quite a few oscillate between fear, sadness, aggression, resignation and paralysis - a single roller coaster of emotions. What is remarkable about it: As different as the crises are - most of the typical emotional phases go through more or less the same ... 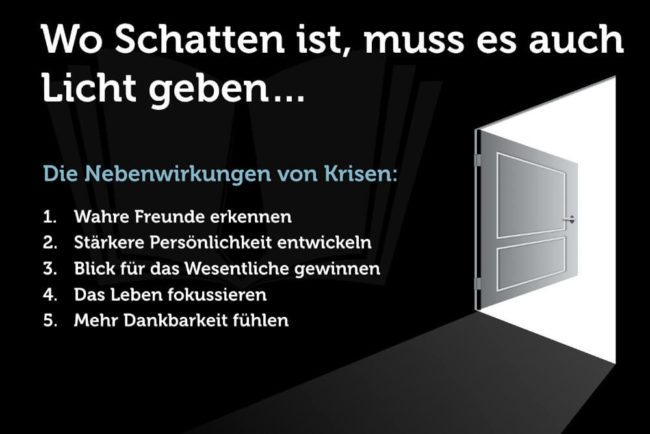 Psychologists are familiar with the emotional phases that those affected go through with varying degrees of difficulty, also as a "Roller Coaster Ride" - a rollercoaster ride of emotions, depending on how many efforts and defeats follow. Interestingly, these phases are typical for all trauma: whether heartache, the loss of a loved one or the job - the emotional ride is almost always the same.

Of course, that doesn't make it any better for those affected, and there isn't a simple recipe for avoiding these emotional phases either. But they can at least be mitigated in this way: if you make yourself aware of which phase you or a good friend is going through, you see yourself in a different light and can help (yourself) better. Scientists Joe B. Hurst and John W. Shepard researched these phases of the emotional rollercoaster in more detail as early as 1986 and translated them into their so-called Roller Coaster Model (PDF). This is how it looks: 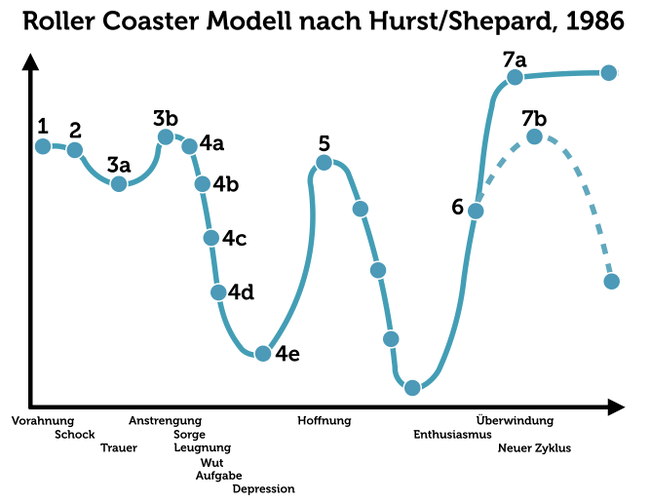 Course of the individual emotion phases

8 tips on how to deal with crises

One thing is clear: displacement is not a solution. Strong emotions cannot be denied or discussed away. They are there and are simply part and parcel of serious crises. The first step is therefore to allow and accept these - at least for a while. In the second step, those affected should deal with it honestly and consciously. Because such feelings are by no means a sign of weakness, but part of the "cleansing catharsis" that Aristotle already described. If you work with your emotions, those affected usually experience how they regain the ability to act. Acceptance is therefore an important step out of the perceived powerlessness. But there are other ways to deal with the emotional roller coaster:

A wild roller coaster of feelings is usually only symptom and consequence, not the cause. So ask yourself what might be behind this. Wrong decision? A wrong application strategy? Or maybe just an unfortunate chain of circumstances, at least no bad faith. By using your negative emotions productively and as a drive for the search for the reasons, you take the reins in your hands again and develop options for action: Often good ideas arise as to how things can go on. More importantly, it is not your feelings that you control, but your emotions.

The stronger you have the impression that nothing works, the more you should keep moving - also physically. Walks have enormous mobilization potential. They are proven to make you more creative and broaden our horizons. However, through physical exercise you also reduce stress and stimulate the mind not to stand still. “Standstill is death” is a well-known bon mot. And it is true: if you stop doing something, you soon give up and afterwards it usually goes much faster on the downward spiral. Therefore: keep going and changing strategies. Anything better than standing still.

Try to clear your head - and with it a better view of things. This works particularly well if you write down your thoughts. For example, one study showed that employees felt less frustration and rejection towards their former employer after losing their job if they regularly wrote down their thoughts and feelings about their professional situation. Another remarkable result: the writing not only had a positive effect on the emotional world, but also increased the chances of finding a new job. 52 percent of them found a job again within the next eight months; in the control group, which did not write down their feelings, it was only 19 percent.

Whether you are going away or staying at home, give yourself a kind of order therapy: Build a structure for the day, a framework for yourself. Always get up in the morning at the same time, make appointments until noon, then take a break, go to eat something and from 2 p.m. you will set up appointments again. As banal as it sounds, the long-term positive effect is phenomenal.

When the job is gone, the associated insignia also disappear, which were previously taken for granted and which some regarded as their property: influence, power, financial possibilities, many material desires, social standing and some friends. Now you are no longer someone but someone who has lost his job and is therefore cut off. Due to the probably very high level of identification with the previous job, the company, the tasks and responsibilities over the years, very few people know who they really are and what they once wanted. What remains when everything outside falls away? Then only you remain. Your innermost core, your character, your heart, your good qualities and maybe your bad qualities, your knowledge of human nature, your experiences, your wisdom, your inner and outer beauty, your strengths, your weaknesses and much more, positive as well as negative. Go on a search and create a personal strengths and weaknesses analysis, a SWOT analysis.

You can make it easier for yourself to determine your position, set goals and develop strategies by asking yourself the right questions:

Looking for an exchange

Look for a conversation with good friends. It is important, however, that you don't just look for interlocutors who confirm your point of view, whine along with you and scold you - even if that is more convenient. Otherwise you will not find a solution, but only reinforce the emotional roller coaster. Certainly you can and should honestly vent all your feelings during an interview. But let the mirror hold up to you and correct your self-perception through a possibly more objective external perception.

Of course, there are far more ways to deal with the roller coaster of emotions. Especially in the long term. In the short term, however, the valley phases can be kept flatter and narrower. The most important thing, however, remains to be aware of the emotions, to accept them and to actively counter them.

The 24-hour rule: Put a limit to the tribulation!

Do you know the 24-hour rule? Actually, it is not a real rule in the sense of an iron law. Rather, it's a kind of reminder that life goes on. In short, the 24-hour rule is, “If you are going through a crisis, you can mop it up for exactly 24 hours. After that, the grief is over and please look positively into the future again. “Admittedly, that sounds a bit esoteric and like the typical you-have-only-positive-thinking-blah blah. Nevertheless, it works, because it is a nice and easy-to-remember reminder not to sink into self-pity for too long when faced with setbacks (of all kinds).

The positive side effects of a crisis

Going through difficult times is truly not a child's birthday. As long as you are still in the crisis, it will be difficult to get anything positive out of it. Nevertheless, it is like this: where there is shadow, there has to be light. The psychologists Richard Tedeschi and Lawrence Calhoun from the University of North Carolina also found this and examined it more closely. And indeed: there are also positive post-traumatic side effects: