How hard does your bird bite

It is not uncommon to hear from a budgie keeper that he was suddenly bitten out of the blue and often only after he has had his birds for a while. This usually causes incomprehension and even suspicion among people. But what is behind the biting budgie?

Biting as an expression of affection - love bites

If you observe your budgies and how they interact with each other, you will quickly see that their beak plays an important role for them and their social behavior. They are used to feed a partner, to defend themselves against a conspecific or to show their affection by gently scratching or biting. In addition, the birds use both beak and tongue to explore things that are unknown to them, such as a new toy or a type of fruit that has not yet been tried.

If a budgie gradually trusts its owner, comes to him for some food or to play with, it is not uncommon for him to want to show his affection to his human counterpart. And of course - just like the budgie - he proceeds in exactly the same way as if he were looking at a fellow of the same species: he examines the texture of the skin with his beak and tongue, tugs a hair and / or nibbles a finger or hand. It can happen that the initially gentle nibble turns into a very firm bite, so-called love bites. These are, however, part of the partner recruitment for budgies and express great affection.

Biting is certainly relatively painful for us humans, but the budgie does not mean it and does not intend to hurt us. Its conspecifics are equipped with a dense plumage, which softens the strength of the beak. We humans do not have such a protective layer - but birds cannot know that.

Even if it may not be easy in such a situation, you should not scare away or even punish your budgie if it bites you in this way. The bird does not understand such a negative reaction, is very irritated and feels rejected. After all, we conveyed to him beforehand by letting him be close that we like him too.

A budgie who suddenly bites from a situation that is not threatening to him, wants to tell us humans: "You know, I really like you!" 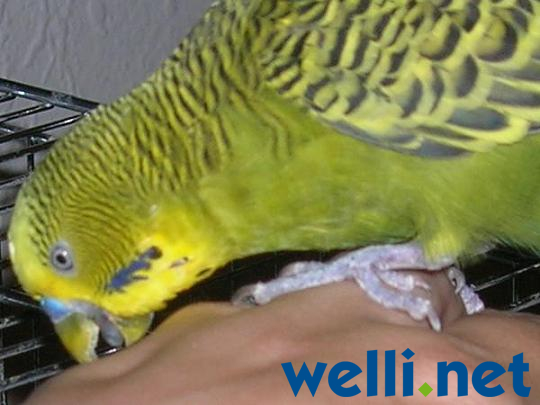 Biting as a defense reaction

Budgies are flight animals and have a natural fear of being harassed or taken in hand. If you hold it, it is as if a bird of prey had it in its claws, which usually means the end for the budgie. Unless he defends himself as best he can - with his beak. So it is not surprising that a hand-held budgie bites. Every budgie keeper has probably been able to observe this situation at least once during a visit to the vet.

For this reason, in order not to unnecessarily disturb your birds, you should never just grab them and take them in your hand! Only the need for medical care (examination by the veterinarian, administration of medication, cutting claws, etc.) justifies such an approach.

If you ignore the fact that budgies usually don't want to be touched, you shouldn't be surprised if the bird defends itself with the help of its beak.

Once he learns that biting can give him space, it can become a big problem. It is not uncommon for a bird so distressed at the beginning to use its weapon in actually harmless situations later, for example when the holder reaches into the cage to change food and water.

Once the animal is conditioned to this behavior, it is very difficult to break such a behavior pattern in order to be able to deal with the budgie normally again.

For this reason, when dealing with budgies, one must never reach for them or take them in hand for no reason! In addition, you always have to give them the opportunity to retreat and never approach them unexpectedly for them, especially not while they are eating or sleeping.

When dealing with your birds you always have to be careful, then you quickly notice when a bird is getting too much and it goes into a defensive position: To do this, the animal leans back its body, stiffens itself and gets ready for a possible attack on his "opponent".

If a budgie reacts aggressively to its owner without the latter having pressured the bird beforehand, other possible causes must be investigated.

For example, if you have taken in a donated animal, it may well be that it was tormented by its previous owner and even the viciousness was the reason for the donation. Likewise, a mistake in the keeping conditions can lead to increased aggressiveness and it is necessary to check whether the parakeet z. B. gets enough free flight to get rid of excess energy or to get a long and undisturbed sleep.

An illness can also be the cause of sudden biting. Especially when this change in behavior is accompanied by an increased need for rest, apathy, diarrhea or other / further signs of illness, the owner must be careful and not unnecessarily postpone a visit to the vet who is an avian expert.

No matter what triggers the biting, you should never punish the budgie for it!

If the bite is a love bite and thus an expression of affection, the relationship between the budgie and its owner would be permanently disrupted by a penalty, because the bird does not understand what it is supposed to have done wrong. Here it is much more the owner who misinterprets the behavior of his animal and reacts to it incorrectly.

And even if the bird bites out of a defensive reaction, it does not deserve any punishment, because here, too, the fault lies in the behavior of the person. If a budgie is aggressive towards its featherless one, this is a clear sign that something is wrong with it or its attitude. So here it is important to find out the cause and fix it.

As a budgie keeper, if you take the trouble to find out more about them, their needs and their behavior, you will quickly learn how to deal with them.

If they behave correctly and carefully towards them, without ever pressuring them for any attempts to tame them, they will usually reward us humans with increasing confidence, so that it is very likely that, as a featherless person, in the further course of the relationship with his budgies, one will only find the not exactly pain-free) gets to feel love bites. And what could be nicer than when a budgie shows so clearly that he loves you? 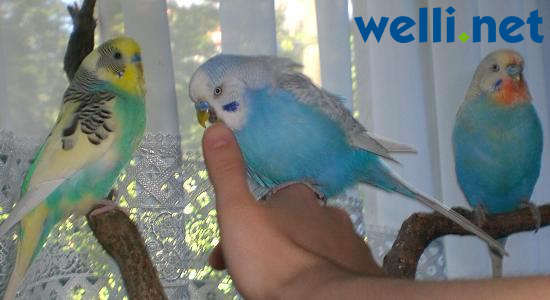 Here Billy shows his affection for his featherless one; he finds them almost as interesting as his fellow species.