What cars have GPS built

How to find out if the car has a GPS tracker

Many GPS tracker manufacturers also sell detectors for GPS transmitters. These recognize cell phone networks such as GSM, GPRS, EDGE or GPS. To use these devices, take it in hand and move it around the car. When it receives such a radio signal, it will start beeping and vibrating to confirm that there is a GPS tracker there. The closer you are to the tracker, the more the device will beep. The problem with these devices is that they don't always work. Many trackers have a standby function that only activates them when the car is moving. These tracking devices can only receive the signal from some trackers when the car is moving.

If you are absolutely certain that you are being followed and you still cannot find a tracker, then perhaps you should seek professional help. Tracking a car is illegal, exceptions only exist for owners of a car who want to locate their own vehicle.

For example, it could be that a car is being tracked that is used by the husband and wife together, or that the adult children are using the car. There is nothing wrong with consulting a lawyer because whoever is tracking your car is likely to be committing a criminal offense.

Auto mechanics who focus on electrical systems can help you see if your car is being tracked. Furthermore, it can be advisable to employ a private detective, they are often familiar with stalking and similar crimes and know exactly where to hide such a transmitter.

Pro tips for controlling your car 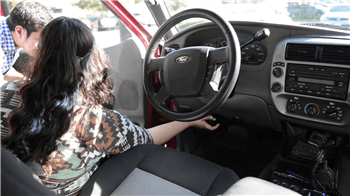 As you can see, most of the locations can be checked quickly and easily. Once you have found a GPS tracker, we will explain how you can best protect yourself. Don't just disconnect the device from the car to avoid setting off an alarm. Most of the time, it is not even possible to disconnect the device without triggering a warning on the server receiving data from the sender.

Some trackers also have batteries that keep transmitting for up to 8 hours after being disconnected. The bigger the battery, the longer the transmitter will work. Some transmitters also have a "towing alarm" which is triggered if the car is moved without the ignition on. Please also note that trackers have a replacement SIM, which sends at less frequent intervals when the power is gone or the first SIM has been removed.

The only way to remove the tracker from the car without triggering an alarm is to power the tracker when it is removed from the vehicle.

Now you can place the GPS tracker anywhere where it would have GPS reception without triggering any alarms. The tracker will now indicate that the car is parked where you placed the GPS tracker, while your car is actually somewhere else.