Should cats be outside or inside

Outdoor cat: Everything about the outdoor area 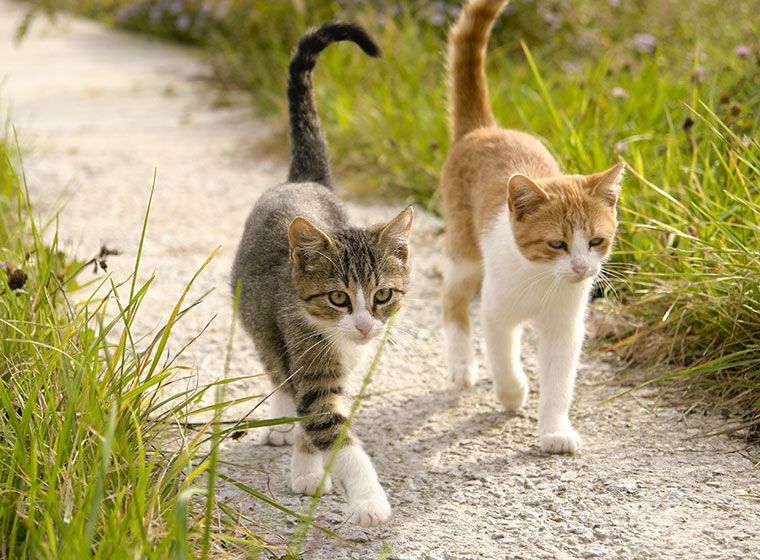 Outdoor cat or house cat? Cats love to roam in nature and practice natural behaviors such as hunting, sneaking, and climbing. For many cat owners, going outdoors is a question of faith. Here you can find out which pros and cons arguments need to be weighed up.

Advantages for the outdoor cat

Going outdoors has many advantages for your cat: Outdoor cats are often better utilized, are less bored, move more and thus prevent unhealthy obesity. A cat that is outside most of the day also makes its humans less work: When it comes home, it will probably sleep a lot and process the day's experiences. This is also positive for the apartment and the furniture, which are often used as a substitute for scratches. The last important point is that by hunting, sneaking, lurking and interacting with other animals, outdoor cats sharpen their senses in a way that an indoor cat will never experience.

Disadvantages of being outdoors

On the other hand, there are of course some contra-points, because as the owner of an outdoor cat you have to be aware that you are giving up a certain amount of control over the cat. Statistics show that the life expectancy of outdoor cats is far below that of purely indoor cats, which of course is related to the risks to which cats are exposed. This can be territorial fights with brutal conspecifics or encounters with other animals, for example martens or foxes. The threat posed by larger dogs is not to be sniffed at either. In addition, outdoor animals increasingly come into contact with parasites, poisonous plants or other objects (rusty nails, ponds with no way out, frozen ponds), which can represent a great danger.

There are also problems if your outdoor cat has to take medication regularly at the same time due to an illness. How do you want to do that with a cat that comes and goes as it pleases? Even if your cat suffers from allergies or intolerances, being outdoors can be devastating if strangers feed on their forays or procure food themselves somewhere.

Another point concerns the phenomenon that cats keep "disappearing". Very often busy roads are related to this and are fatal for the velvet paws. Some cats simply look for new territory and decide not to come back because they like it better there; others are unwillingly "adopted" by strangers and simply taken with them.

Usually this problem is only considered for dogs running freely, but unfortunately cats are also often affected by it: poison bait. One hears again and again about dogs or cats who become seriously ill or, in the worst case, even die from deliberately placed poisonous bait. This risk should definitely be considered.

When considering allowing your cat to go outside, there are a few things that should be considered. We want to address the three most important points here.

This is probably the most crucial point when considering freewheeling, because if you live in the middle of the city or right next to a motorway, you should better refrain from unlimited freewheeling. The risks are just too great. Ideally, you should live as far away as possible from possible sources of danger: This includes, among other things, busy roads as well as highways or hunted forest areas. In general, such potential dangers for female cats and neutered male cats should be at least 400m away, and for uncastrated male cats even up to 1000m. You should also seek the neighborhood's opinion on free-range cats before starting an argument with a neighbor who is terrified for his beloved koi carp.

Is the cat's health condition?

Another important point is the cat's health. After all, outdoor cats are exposed to more danger than indoor cats. These dangers do not necessarily have to “strike”, but one way or another the preventive measures cause increased veterinary costs. This includes, for example, costs for additional vaccinations (e.g. against rabies) and more frequent worming. In general, the risk outside of being infected with parasites such as worms, ticks, fleas or mites is much higher. Only in the rarest of cases does an outdoor animal never have such a vermin problem.

If your cat is chronically ill (see disadvantages) or has a disability that severely restricts it (e.g. blindness or amputation of a limb) then it should not be given free access, at least not unlimited. Another important point is that everyone outdoors should be neutered. You will then have a smaller territory, become less involved in territorial fights, and will not contribute to the uncontrolled reproduction that brings so many cats to the shelter.

Is the cat labeled?

It should be as natural as the previous neutering that your cat is tagged. The best way to do this is to get them chipped. The chip inserted under the skin in the neck enables all important data on the cat and the owner to be read out very quickly with the aid of a reader. So if your cat gets lost, the finder can quickly find out where it belongs at appropriate facilities (often veterinarians or animal shelters).

Tattooing an identification number in a cat's ear is less suitable and only rarely used. This method is considered out of date and unsustainable as the tattoos often fade. Under no circumstances should you send your cat outside wearing a collar. There is too great a risk that your velvet paw gets tangled up somewhere and strangles while trying to break free.

The realization of the clearance

Even before you bring a cat into your house, you should consider whether you want to allow it to go outside. Just wanting to keep an all-outdoor cat indoors won't make you or the cat happy.

If you get a new cat or have moved, the cat should be kept in the house for four to six weeks, or longer in the case of shy animals. This gives her the opportunity to get used to the new home, to settle in and to develop a bond with this place. This is the only way to ensure that she will find her way back and come back. It becomes problematic when the new home is not far from the old one. Cats often return to their old territory again and again.

Even a so far pure indoor cat can be offered outdoor access without making it an outdoor cat. But here there is the risk that she has a less strong immune system and is less able to find her way outside. That is why most indoor cats are initially skeptical about their newly gained freedom and always stay close to the house in order to be able to flee to a safe place quickly in case of problems.

In general, cats can also be kept in a species-appropriate manner within an apartment or house if this is designed in a cat-friendly manner. This includes sufficient litter boxes and scratching opportunities, a clean feeding place and preferably several water points. Quiet places to sleep and enough toys are also important. It is also advisable to get a second cat, because cats are also sociable animals that usually do not feel comfortable without contact with other cats.

If you do not have the opportunity to give the cat outdoor space, there are also certain alternatives: A balcony can be networked cat-safe and thus become a sunny island for your house tiger. Gardens can also be made cat-safe with certain systems, but this is a greater effort. If, on the other hand, you are technically gifted and there is enough space, you can also build an outdoor enclosure. This is even safer than any other fencing system. However, this procedure should be discussed with the landlord in advance to be on the safe side. And if none of that is possible, then many cats like to at least enjoy a barred window through which they can get some fresh air and relax in the sun.

Help us to further improve our service. Was this article helpful to you?