Is nitrobenzene more reactive than phenol

The nitration of benzene

Aniline C6H5-NH2 is a very important raw material for the dye industry. A well-known chemical company with 112,000 employees worldwide is named after the aniline, the Badische Anilin- & Soda-Fabrik, better known today as BASF.

Aniline was originally made from the dye indigo in 1826. In 1897, BASF discovered that the other way around, indigo could also be produced inexpensively from aniline.

Today the aniline is placed on a copper catalyst made from nitrobenzene C at 270 ºC and slightly overpressure6H5-NO2 and hydrogen gas H2 here.

Nitrobenzene (a pale yellow oily liquid that smells of bitter almonds, but extremely poisonous) can be made from benzene and fuming nitric acid. Eilhard Mitscherlich carried out this reaction for the first time in 1834, and nitrobenzene was already being produced industrially in 1847. In 1863 Julius Wilbrand discovered that a mixture of conc. Nitric acid and conc. Sulfuric acid is much more reactive than fuming nitric acid. This mixture was then called nitrating acid.

Step 1:
Formation of the nitronium ion

What actually happens in the nitrating acid? Incidentally, this is a question that is also interesting for the acid / base course in level Q1. In this course you got to know the concept of protolysis: A proton donor ("acid") transfers a proton to a proton acceptor ("base"). Would you have thought that the extremely strong nitric acid can also act as a base?

Formation of the nitronium ion

The overall reaction in the nitrating acid can thus be formulated as follows:

Step 2:
Formation of the pi- and sigma complex

The nitronium ion attacks the benzene molecule with the positive nitrogen atom. A π-complex forms as a transition state, then a σ-complex as an intermediate product.

The π complex becomes the σ complex

What you don't see in the figure are the boundary structures of the σ-complex. There are altogether three of these border structures: 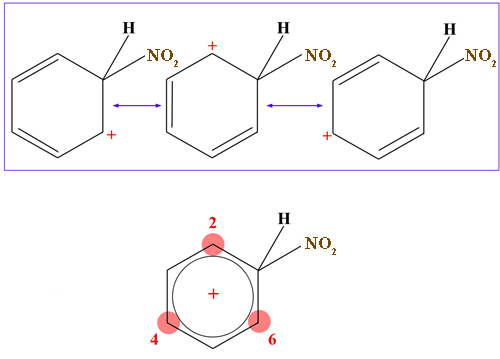 The three boundary structures of the sigma complex

As such, the positive charge of the σ-complex is delocalized, but with three carbon atoms of the benzene ring the probability is higher that they carry a partial positive charge.

Step 3:
Recovery of the aromatic state

There is not much left to say here. As with the bromination of benzene or other aromatics, it is energetically more favorable to restore the aromatic state by releasing a proton. For such a re-aromatization, the H atom of the sp3-hybridized C-atom with the NO2-Group can be given, then from the sp3-hybridized carbon atom again a sp2hybridized, and the resulting pz-Orbital can be associated with the other five pz- Unite orbitals into a closed ring system with six delocalized electrons, which fulfills the Hückel rule.

Recovery of the aromatic state

Nitrobenzene is an important basic chemical in organic chemistry; aniline, for example, can be produced from nitrobenzene.

TNT or trinitrotoluene can be made from toluene and nitrating acid, a military explosive that is still used today (grenades, bombs, mines). Picric acid can be produced in a similar way from phenol and nitrating acid, and when dry it is also an explosive, but when moistened with 30-50% water it is usually harmless. Interestingly, picric acid is not produced directly by nitrating phenol, but rather the phenol is first sulfonated twice. The two SO3-H groups are only activated in a second step by NO2Groups replaced, and the resulting 2,4-dinitrophenol can then be nitrated to 2,4,6-trinitrophenol (TNP) or picric acid.

Another explosive can be produced by nitrating glycerine, nitroglycerine. However, glycerine is not an aromatic, so there is no electrophilic substitution, and the process is therefore of no interest to this department of the chemistry pages.