Who is Vo Nguyen Giap in Vietnam 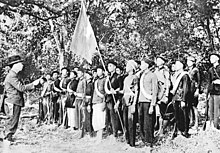 Giáp (left) with Vietminh fighters in 1944 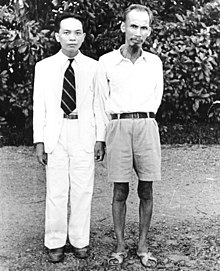 He was the military leader of the Việt Minh troops of Hồ Chí Minh and the People's Army of North Vietnam. Giáp was considered the "Napoleon of the East" (Peter Scholl-Latour) due to his tactical and strategic brilliance.

Võ Nguyên Giáp was the son of a Vietnamese village teacher who had his own land, and from 1926 he attended the trường Quốc học, the French lyceum in the Vietnamese imperial city of Huế. His father and one of his sisters died in French custody as a result of nationalist activities. At 15 he became a member of Annam's revolutionary party (Tân Việt Cách mạng đảng), and at 18 he was arrested for participating in student protests. From 1933 to 1938 he studied law and economics in Hà Nội. He worked as a teacher of history and geography in Hà Nội. Because of his opposition to the French colonial power, he was brought to the prison island Poulo Condor in 1939 and emigrated to the Republic of China in 1940 before the Japanese. There he co-founded the League for the Independence of Vietnam (Việt Minh) in May 1941.

Giap's wife, daughter, father, as well as his stepsister and stepbrother were arrested by the French colonial authorities and died in custody from 1941 to 1943.

He was entrusted by the Central Committee of the Việt Minh with the creation of a People's Army, which was officially established on December 22, 1944. In China he took part in building up the guerrilla forces, organized a network of agents in North Vietnam with the help of the American OSS, commanded the Vietnamese resistance against the Japanese army and returned to Vietnam in 1944 as commander of the partisan groups. In 1945 Giáp became Minister of the Interior of the Democratic Republic of Vietnam. Contrary to his hopes, the good rapport with the Americans broke after the war, when they enabled the return of the French colonial power and dropped their Vietnamese allies.

From 1946 Võ Nguyên Giáp was Commander-in-Chief of the North Vietnamese People's Army (NVA). As a logistician and military tactician, he developed a multi-level, extremely successful guerrilla tactic. This let the Vietnamese troops win in the Battle of Điện Biên Phủ on May 7, 1954 over the modern equipped French army, including selected units of the Foreign Legion, and liberated Vietnam from French colonial rule. 1954 to 1980 Võ Nguyên Giáp was Minister of Defense, from 1955 Deputy Prime Minister of North Vietnam. He was a member of the Central Committee and the Politburo of the Party of Working People of Vietnam (Đảng Lao động Việt Nam). He fought against the USA and South Vietnam, for the reunification of the country and was responsible for the surprising Tết offensive, which failed militarily, but brought about a political turning point.

After the unification of North and South Vietnam in 1976, Võ Nguyên Giáp took over the office of Minister of Defense and Deputy Prime Minister of the Socialist Republic of Vietnam. In 1980 he was replaced as defense minister by Văn Tiến Dũng. From 1982 he was no longer a member of the Politburo, but remained until 1991 Deputy Prime Minister and member of the Central Committee of the party renamed the Communist Party of Vietnam ((ng Cộng sản Việt Nam) after unification.

On August 25, 2011 Giáp celebrated his 100th birthday in an army hospital in Hanoi. It last aroused public interest in 2009 when, in an open letter, he vehemently criticized a government project to permit a Chinese bauxite mine in central Vietnam.

After more than ten years of preparation, the life of Giáp was processed into a stage show with 300 participants, which shows the role of Giáp in the battle for Điện Biên Phủ in 12 acts. The three-hour work entitled General Võ Nguyên Giáp and the Điện Biên Symphony was conceived by the director Nguyễn Quang Vinh from elements of theater and cinema. The world premiere took place in Đồng H ini on May 28, 2011 and was broadcast live by Việt Nam Television VTV1.

Grade: The family name of this Vietnamese name is Võ , in Western texts the spelling is often simplified Vo . According to Vietnamese custom, the person should be referred to by their first name Giáp - even in formal situations.
<?