How did we know about black holes

Researchers find the cause of the active centers of galaxies

A massive black hole sits at the heart of most galaxies. Our Milky Way also harbors such an exotic object, which, however, behaves quite calmly - in contrast to the heavy-weight mass monsters in other galaxies. Researchers at the Max Planck Institute for Extraterrestrial Physics in Garching and other institutions have now observed 199 of these star systems and found out why the black holes in their centers are so active: Apparently they were "switched on" when large galaxies merged around 700 million years ago ". (The Astrophysical Journal, in press) 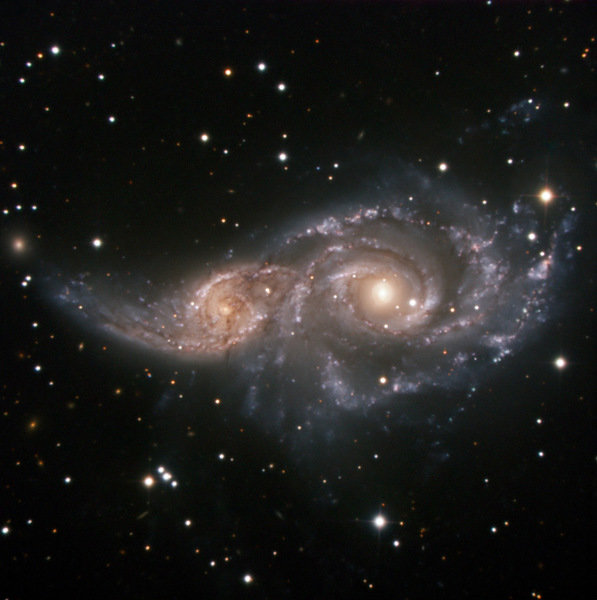 While the black hole in the center of our Milky Way corresponds to about 4 million solar masses, the black holes in the 199 galaxies examined typically have a mass of 300 million suns. In addition, these galaxies are much larger than our Milky Way and their inner area shines with a much higher luminosity than that of normal galaxies.

Astronomers believe that this radiation is generated when matter hits the particularly heavy black hole in the center. Previous studies suggest that the birth and evolution of galaxies and their central black holes are closely related. However, there are various ways in which the gas, which is distributed within the galaxy, can get to the black hole. The researchers did not yet know which of these mechanisms prevailed in which stage of development of a galaxy.

The two most important paths are either internal disturbances, such as instabilities in the galactic disk, or mergers and gravitational interactions between close pairs of galaxies. With regard to the spatial distribution of the active galaxies and their masses, simulations of these processes lead to different predictions.

Previous studies looked at star systems that were selected for their optical or soft X-ray radiation alone. Naturally, a large part of the radiation that originates from the black hole was disregarded, as this is partly "swallowed" by dust and other matter in the galaxy.

"For our study, we limited ourselves to galaxies that were selected for their hard X-ray emission in the Swift BAT sky survey," says Nico Cappelluti from the Max Planck Institute for Extraterrestrial Physics. "This catalog offers a unique characterization of the different sources." According to co-author Marco Ajello, a scientist at the Kavli Institute for Particle Physics and Cosmology in Stanford (USA), the sky survey provides a complete picture of the local active galaxies. "This enabled us to take the measurements right on our cosmological front door."

The analysis of the spatial distribution of 199 selected galaxies now gives, for the first time, an unadulterated picture of the joint development of the galaxies and their active nuclei in the nearby universe. According to this, the active galaxies harbor black holes with typically around 300 million solar masses in their centers. The mass of the Milky Way systems themselves corresponds to that of around 200 billion suns.

The galaxies, in turn, are located within large bubbles of dark matter - as massive as 100 Milky Ways. These properties are closely related to luminosity: the more luminous sources come from more massive galaxies with larger black holes.

When comparing the observation data with predictions from theoretical models, the scientists found that the most likely scenario for the origin of the local active galaxies is a cosmic collision: "The active galaxy nuclei switched on and glowed around 700 million years ago after the merging of large galaxies very bright in their first phase of life, "says Cappelluti. "In doing so, they gained most of their mass."

After about 200 to 500 million years, the mass accumulation ("accretion") became less and less efficient as the gas supplies ran out. To date, the galaxy nuclei have grown into super-massive black holes - with 100 to 1000 solar masses; however, compared to other active galaxy nuclei, they only shine with moderate luminosity because there is no material supply and the black holes are, as it were, "starving".

The results of Nico Cappelluti's group contribute significantly to a better understanding of the origin of black holes in galaxy centers. In the coming years, the next generation of X-ray telescopes - such as eROSITA, which is currently being built at the Max Planck Institute for Extraterrestrial Physics - will continue to map black holes and dark matter. These studies are expected to shed light on the history of the most exotic phenomena in the universe.