What is Belarus known for?

Belarus is a state in Eastern Europe. The country used to be called Belarus. It is about two thirds the size of Germany, but only about as many people live there as in the state of Baden-Württemberg. The capital is Minsk, where almost every fifth inhabitant of the country lives.

Belarus is the largest state in Europe that does not have its own sea coast. The land is mostly flat. It is a little more hilly in the center of the country. The highest point of Belarus is the Dzerzhinskaya Gora hill with a height of 345 meters. Two major rivers have their source in Belarus: the Pripyat and the Dnieper. Both rivers later flow together and flow into the Black Sea.

For a long time the country was part of Russia. After the First World War it was split up: the eastern half had been conquered by the Soviet Union and the western half by Poland. After World War II, all of Belarus became part of the Soviet Union. It has been an independent state since 1991.

Ukraine borders Belarus in the south. In 1987, the Chernobyl nuclear power plant exploded in Ukraine. That is why around a quarter of Belarus is still "contaminated". For example, those who live there are more likely to get cancer because of the radioactivity. Some of the children of these parents are born with deformities.

How do people speak and what do they believe?

The people of Belarus speak both Russian and Belarusian. There is also a kind of mixed language between the two. In addition, Belarusian is written in different ways. All of this makes it difficult to say which language is actually the language of the country. Furthermore, people with Polish as their mother tongue also live in Belarus.

Religion is not important to all people. Out of five people, only about three describe themselves as Christians. Most of them consider themselves to be part of the Orthodox Church. A small part is Catholic or Protestant. But there are also few Muslims and Jews.

What do people live on?

The construction of machines has increased, for example tractors, refrigerators and other devices. Cars are also made, car tires, watches and many other things. Most of these companies also belong to the state. The textile industry is declining, as is the management of forests and the sale of wood.

Around every seventh inhabitant works in agriculture. The farmers mainly plant potatoes and keep cattle. The farms are also mainly owned by the state.

Who rules the country? 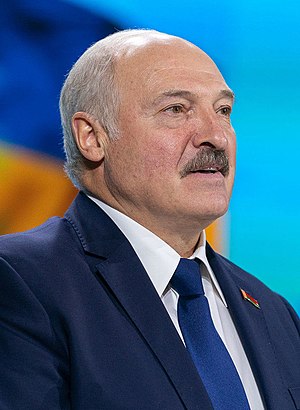 Alexander Lukashenko rules the country with increasing violence. It is believed that he falsified the election results.

Alexander Lukashenko has been the head of state since 1994. Above all, he wants to work with Russia. That makes Belarus heavily dependent on Russia. While Lukashenko was in power, the laws were changed so that he could stay in power even longer. He ruled the country more and more arbitrarily. Soon he was called the “last dictator in Europe”. He made sure that many people went to jail for criticizing him.

In the following elections, around 80 out of 100 people are said to have voted for him. But more and more people at home and abroad assumed that the results were fake. The worst was in the elections in July 2020. The strongest competitor, Svetlana Tichanovskaya, felt so threatened by the government that she had to flee abroad. Since then, many people have taken to the streets and protested against Lukashenko. Its police officers used a lot of force against the demonstrators. Parts of the army marched up. The European Union then imposed penalties on many senior officers. She wanted to show that she does not support Lukashenko's course. Canada and the UK also imposed measures against Lukashenko himself.

There are also other search results for "Belarus" from Blind Cow and Ask Finn.

The Klexikon is like a Wikipedia for children and schoolchildren. The most important things explained simply, with definition, many pictures and maps in over 3000 articles. Basic knowledge suitable for children, everything easy to understand and good for presentations in school.
<?