What are the different types of traffic

When one speaks of mobility, it must first be clarified what type of mobility is meant: mobility is usually understood to mean spatial mobility. But there are many types of movement / agility - mental, social, cultural ... 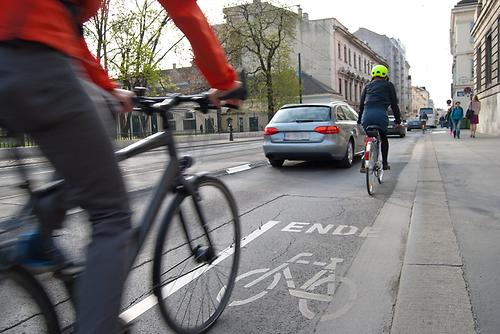 While the last forms of mobility undoubtedly have a positive connotation, this has not been unreservedly true for spatial mobility for some time: for too long, traveling faster and cheaper for people and goods has been synonymous with progress.

In the meantime, the downsides of unrestricted spatial mobility, traffic, in the form of enormous resource consumption and emissions problems including climate change, effects on health, but also through the increasing spatial-functional differentiation are becoming clearer.

The increasingly clear drifting apart of places of residence / work / leisure and purchase requires an increasing willingness to be mobile and, consequently, the actual movement between the different destinations. Mobility gradually turns out not to be an increasing freedom of choice for the individual, but something inevitable.

This is accompanied by a clear / dramatic decline in easily accessible infrastructure (local suppliers, medical care, public and financial services, etc.), which makes mobility a particular problem for individual population groups and also makes mobility a social one.

Mobility has lost its nimbus as a motor for progress per se and all lines of development for improvement must be analyzed in a differentiated manner, especially with regard to the effects.

From today's point of view, new types of mobility appear compatible with sustainable development, which are subsumed under the term "soft mobility", which includes the so-called "environmental network" (public transport (public transport for short), cycling, walking) .

First of all, the understanding that mobility is equated with the availability of a car must also be dispelled. For a long time, mobility has developed along with the increasing use of cars. However, mobility basically simply means the spatial mobility of people and goods - and this is covered by different forms.

In the first, comprehensive survey of mobility in Austria for decades, which was carried out from October 2013 to October 2014, essential data on the types of spatial movement were determined in a Europe-wide standardized procedure [1].

It can thus be stated that:

This means that today, on average, almost 60% of all trips in Austria are made by car.

Today, what is new in the way of transportation is not a technical innovation, but the challenge of changing this modal split - the division of mobility between different carriers - in a sustainable way. The carriers remain the same as before: MIV (motorized individual transport), public transport, cycling, walking. However, there are significant innovations that are intended to help achieve an ecologically and socially better way of coping with mobility needs.

Even smaller cities are now investing in urban railways, such as Gmunden with the city-regional tram [3].

However, for acceptance it is essential to link the public transport network with other mobility providers in order to meet individual mobility requirements. The goal is called "multimodal transport offer".

These nodes will be equipped with car and bike sharing services and - as in the past - with bus terminals. The connection of train and bus arrival and departure times should be well coordinated in order to keep waiting times short. In Mödling, a large display board was installed at the bus terminal in a pilot test to show the construction drivers any delays in rail operations. Buses wait up to 5 minutes for late trains to depart.

A novelty in supra-local bicycle traffic is the orientation towards cycle superhighways - also beyond the city limits and the integration of the surrounding area of ​​the big cities in an efficient cycle network. The massive increase in the use of eBikes offers a practical perspective for many commuters to get to their distant workplace by (e) bike.

But in addition to the construction of new (kind) bike paths, there are also pioneering technological developments in the field of bicycles themselves: Since March 2017, the City of Vienna has been massively promoting the purchase of cargo bikes. Bicycles can now - possibly with electrical support - also take on functions in mobility that were previously reserved for car traffic, namely transporting loads and driving with (small) children.

In recent years, the principle of densification in large cities, but increasingly also in smaller cities, has become increasingly popular in spatial planning to improve mobility requirements: a densely populated residential area can be developed relatively easily with public transport. And in fact, car use is falling - slowly - in metropolitan areas.

It is important, however, that the conditions for walking (and cycling) are adequately offered in these metropolitan areas: people prefer to take longer journeys if they do not have to climb between parked cars.

Convenience restrictions of motorized individual transport - at least in the cities, through restricted zones reserved for pedestrian / bicycle traffic and public transport: these have been the pedestrian zones since the 1970s, but so-called "superblocks" can also do so, as in some cities be in Spain, where several streets are combined into blocks, with car traffic only allowed on the outer edges of these blocks - unhindered. Within the blocks, paths and recreational areas for pedestrians and cyclists will be optimized and streets will be rebuilt.

Groningen (NL) has divided the city center into 4 zones, each of which can be reached from the outside by car - however, there is no possibility of driving directly from one of the zones to another.

Ultimately, parking space management also controls mobility in cities, and was not just the so-called "stationary traffic". Some cities collect city tolls for entering the centers in order to limit journeys to at least the really important ones. In all of these cities, pollution has decreased significantly (Stockholm: 13% less NOx, 8% less CO2, 3% less particulate matter).

Nevertheless, individual mobility will keep a place in the mobility mix. However, in order to at least increase the pressure on the space requirements in stationary traffic and also the utilization of the vehicles used, car sharing is increasingly becoming a new type of mobility. Both in the conventional way with fixed parking spaces and in the form of free-floating (e.g. car2go from Daimler and Europ-Car).

The free-floating systems will be viewed with a bit of skepticism by traffic planners, as they compete to a large extent with public transport. But if cars continue to be used, then this form of transport should in any case cause less environmental pollution: that is one of the main reasons for promoting electromobility. 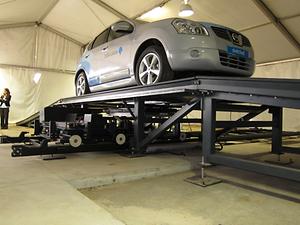 Quick battery replacement, here the demo system from better place in Tel Aviv, photo: G. Wannenmacher
At the moment there is a competition of ideas not only about the vehicles themselves (there especially about the commercial vehicles), but about all topics of the charging infrastructure. In addition to the already known types of charging stations, a Berlin initiative is working, for example, on the possibility of charging street lamps [4].

Years ago, a much-noticed experiment with eTaxis took place in Tokyo, the battery of which was exchanged in seconds at special "filling stations". The project was run by a Danish-Israeli consortium “better place” and the solution was really impressive. Unfortunately, this project has not progressed for the time being and the company is now bankrupt.

However, there are also developments that are suitable for reducing the need for mobility - even if they are perhaps not initiated with this purpose:

Due to the better technical possibilities, companies are increasingly switching to organizing video conferences and thus reducing business trips. 6 years ago, Telekom Austria saved 2,000 business trips per year by promoting teleconferences, thereby saving around 150 tons of CO2. Even more important, especially for the daily commuter flows, is the increased use of teleworking in many companies in the service sector: employees work at least temporarily on their PC at home, which is - securely - connected to the company network.

These are all steps in the right direction: to make spatial mobility more sustainable, socially and ecologically compatible again.