What are the different scenarios for human extinction

Is humanity dying out? 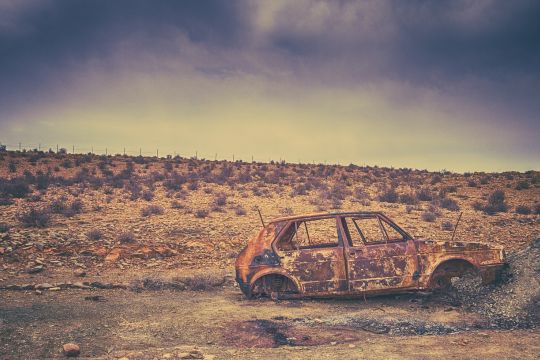 Despite the climate crisis, the earth will remain, as will our wrecked cars for the foreseeable future. And we humans? Probably also - but there is also the worst-case scenario. (Photo: Delyth Williams / Pixabay)

The perception of the climate problem is currently changing rapidly. The term "climate change" is increasingly being replaced by "climate crisis" and instead of "warming", "climate overheating" or a similar term will prevail. But is it appropriate to speak of the end of our civilization or even the extinction of mankind?

Some of today's most important climate movements are doing just that. "Extinction Rebellion" has extinction in its name and the movement's first demand is: Tell the truth and declare a state of emergency.

Greta Thunberg from Fridays for Future also says clearly what options humanity has: "Either we decide to preserve our civilization or we don't." And addressed to the leaders of the world, Thunberg says: "I want you to panic."

But is there really reason to panic? Finally, the Intergovernmental Panel on Climate Change (IPCC) says that theoretically overheating can still be stopped at 1.5 degrees. The IPCC reports are considered the "gold standard" in climate science because they summarize the findings from thousands of studies.

But the reports are also criticized, for example because of their language. Hans Joachim Schellnhuber, ex-head of the Potsdam Institute for Climate Impact Research and IPCC author, says about IPCC authors: Among them, a trend has developed to "err on the side with the least drama". So they represent the situation better than it is, so as not to sound alarmist.

The "probability obsession" of the IPCC

In addition, the IPCC assumes that the warming will continue linearly. However, many computer models of the climate show that warming is accelerating. The difference: instead of 2040, the 1.5 degree threshold will be reached in 2030 (see grafic). 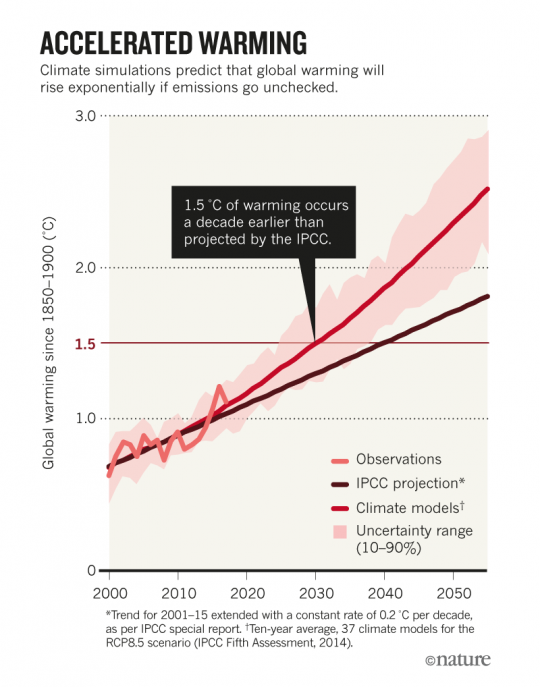 In addition, the IPCC takes too little account of feedback effects such as the thawing of permafrost, which can ensure that climate overheating itself intensifies.

According to Schellnhuber, however, the greatest shortcoming is the IPCC's "obsession with probability", as this means that too little attention is paid to the most dangerous developments: "There is little point in calculating probabilities in the most critical areas such as the thawing of permafrost or the possible collapse of entire states."

In addition, the damage caused by the collapse of our civilization cannot be quantified. According to a new study by the Australian think tank Breakthrough: "A risk is usually calculated by multiplying the probability of an event by the expected damage. But when the damage can no longer be quantified, this method comes to an end."

But even in the still quantifiable area, one underestimates the risk if one concentrates primarily on the relatively probable warming and ignores the worst-case scenarios. Because with these, the damage increases exponentially (see graphic below).

Schellnhuber therefore calls for less attention to be paid to "probabilities" and more attention to "possibilities". "This corresponds to scenario planning in the economy, where the consequences of possible developments are examined, which may appear improbable, but have far-reaching consequences."

This is exactly what the authors of the Breakthrough Study, David Spratt and Ian Dunlop, did and developed a scenario in which the climate would heat up by three degrees by 2050. It's not extreme. For the 30 years to the middle of the century, there is a five percent chance that the climate will warm by 3.5 to four degrees. 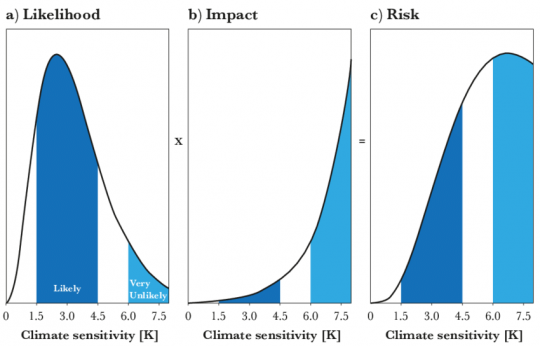 Big end: How sensitively does the climate react to the warming of the atmosphere (climate sensitivity) and what are the consequences? The probability (likelihood) multiplied by the damage (impact) results in the risk (risk). The light blue bar shows that very unlikely developments represent the greatest risk. (Graphic: from the study)

To show how this can happen, Spratt and Dunlop tell a "story":

In the coming decade, too little attention will be paid to the climate crisis and emissions will continue to rise until 2030, only to fall afterwards. Then it will be too late and the climate will warm up by three degrees by 2050.

In retrospect, scientists then determine that several tipping points have been reached, such as the thawing of permafrost and droughts in the Amazon rainforest. A third of the earth is now too hot for at least 20 days a year for people to survive outdoors. Food production is no longer sufficient to feed everyone, and there are more than a billion climate refugees.

Extinction Rebellion and Greta Thunberg refer to such scenarios with their apocalyptic language. It is even more likely that our civilization will not end and humanity will not die out. Nevertheless, it is possible if the protection of the climate continues to be pursued only half-heartedly.

It is precisely these "possibilities" that need more attention, says Schellnhuber: "This is especially true when it comes to the survival of our civilization."