What is the best extraterrestrial evidence 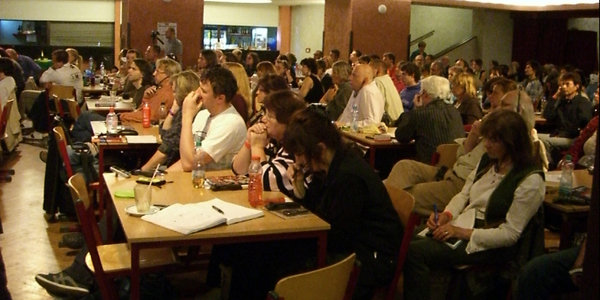 The aliens are here 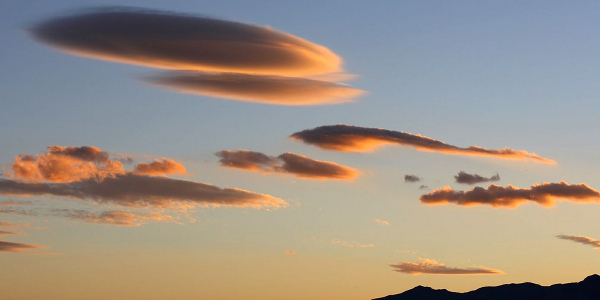 A UFO or dirt on the camera lens? Photo (detail): photophilde, CC BY-SA 2.0
“Serious scientists distance themselves from our congress!” Shouts moderator Igor Chaun euphorically. The visitors to the Vltavská cultural center in Prague acknowledge the information with applause. Hundreds of people have gathered here under the motto “2012 and the extraterrestrial presence on earth” - despite the impressive entry price of 850 crowns (around 34 euros).

Igor Chaun takes care of everything. He looks after the guests, holds small talks and discusses the process. "It's not stress, rather positive tension," he says breathlessly on the way to the lunch break. The award-winning documentary film director was one of the leaders of the student protests in autumn 1989 that led to the collapse of the communist regime in what was then Czechoslovakia. Today Chaun's mission is a different one: “We have to understand that we are neither alone in space nor alone on earth.” That is why he supports this congress, explains the 48-year-old and devours his lunch.

Much persuasion does not seem to be necessary in the Vltavská cultural center. There is consensus about the presence of aliens on our planet. This is "not a question of belief, but a question of whether one is willing to accept the facts," explains the Portuguese ufologist Francisco Mourão Corrêa and receives applause from the scene.

Photos serve as evidence. According to the program, "independent journalist and researcher" Karel Rašín identifies spots that can be mistaken for dirt on a camera lens as UFOs. But the 50-year-old still has aces up his sleeve.

Rašín and his colleagues visited dozens of Czechs who claimed to have had contact with extraterrestrials. This is how Rašín found out about beings on Venus. Average age 5,000 years. Other "witnesses" tell of alien abductions. Photos of bruises should prove these experiences. An x-ray shows a foreign body in the brain of an abductee. "An alien implant," Rašín is certain.

In 2009 Rašín founded the in the Czech Republic Exopolitics group. She examines the political dimension of an extraterrestrial presence on earth. The founder of this pseudoscientific school of thought is the Australian Michael Salla. He also speaks in Prague. The doctor of politics claims that the former US President Eisenhower met twice with extraterrestrials in the mid-1950s and agreed to exchange technologies. The spread of such theses led to Salla's dismissal from the University of Washington D.C. in 2004. 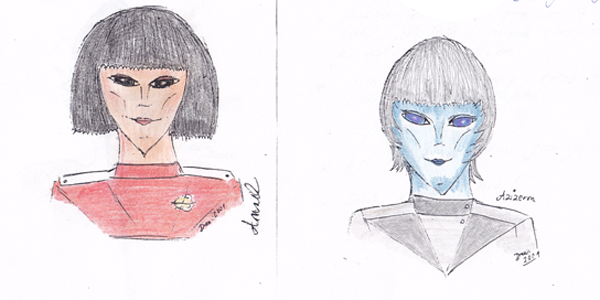 Anael and Azizeron from Venus, drawing of a “witness”, source: www.exopolitika.cz

Many former colleagues think Salla is crazy, others laugh at him. Also Václav Urban, a friendly older man with white hair and a full beard and also a member of the Czech Republic Exopolitics Group, knows this mockery: “At the beginning it hurts you, but you get used to it. If someone doubts the facts, that's not my problem. "

Conspiracy theories are not far

But who believes these "facts"? Creating a profile is difficult. All age groups are represented at the Prague Congress, the ratio of male and female visitors is balanced. A look around the group suggests neither a low level of education (on the contrary) nor a mass psychosis. However: conspiracy theories are not far.

The "lie" about the moon landing, for example. The German ufologist Robert Fleischer has a spectacular assumption: "This lie could have been deliberately launched to cover up the fact that traces of aliens were found on the moon." A lady whose T-shirt reads "9/11 what an inside job “adorns, Michael Salla has his new book signed. 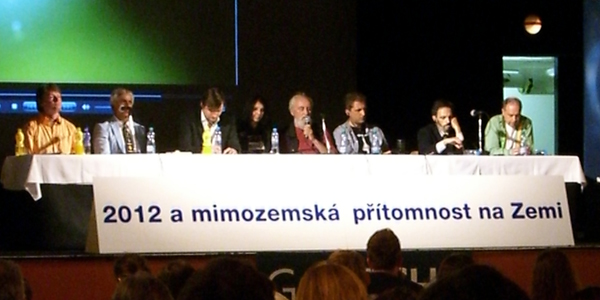 The top-class speakers: Igor Chaun, Michale Salla, Robert Fleicher, Joanna Summerscales, Václav Urban, Robert Bernatowicz, Francisco Mourão Corrêa, Karel Rašín (from left), photo: Patrick Hamouz
Similar to conspiracy theorists, ufologists also rely on a system of interpretation that is self-sufficient. The ridicule of the media and "serious" scientists are large-scale disinformation campaigns by governments and the military. In reality, intelligence agencies would have infiltrated the independent research groups to get information about extraterrestrial technologies. "If these technologies were to become known to the general public, the power of our governments would no longer be tenable," explains Václav Urban, a cyberneticist by profession.

Heavenly ducats as a reward

Organizer and presenter Igor Chaun admits to doubting such theories. His approach is more esoteric. “Our cosmic brothers move in a higher dimension and we can learn from them,” says Chaun, chewing his chicken with relish. In 2001 he had contact with extraterrestrials during a religious ceremony by Amazon Indians - after ingesting a "holy drink". “I'm not quite clear about it yet. I have my own problems too. Probably every healthy person in this sick world has it ... This roast chicken is excellent! Aren't you hungry? ”No ... one more question, Mr. Chaun. Is such a congress lucrative? "Yes, that is lucrative in paradisiacal ducats on the Savings Bank of Heavenly Heights."