What are some Italian sauce recipes

Penne with cherry tomatoes
Photo and recipe: Cucina Italiana
You can find it here recipe

Imagination with a few rules:

Choosing the right pasta is almost a philosophy. We therefore want to approach the issue from a more practical point of view. It is about the rough rules of thumb that do not restrict the necessary leeway for the “Fantasia in cucina”.

What is simply called sauce in German has several names in Italy, with the terms sugo and salsa overlapping in their meanings. In Italy, sugo is the name given to simple sauces that have only one or a few ingredients. The best example of this are tomato sauces: in Salento it is customary not to add anything to the tomatoes. The composition of the classic carbonara (bacon, egg, sheep's cheese and Grana Padano) is a bit more complicated - so it is more of a salsa. However, this is not actually a sauce, because the charcoal burners, after whom the recipe was named, had very few dishes on hand in the woods near the coal heaps. Therefore, the sauce was simply tipped into the pot with the finished cooked pasta, stirred again and then ... Buon appetito.

This process is still common today because the pasta and the sauce combine in an ideal way due to the heat of the pasta. Condimento, on the other hand, is a term that is also used in relation to salad. Just as the salad is “dressed” with a sauce based on olive oil, there are also a variety of oil-based sauces for pasta. The best-known is probably “Aglio, Olio e Peperoncino” - that is, oil, garlic and peperoncino - followed by pesto (oil, pine nuts chopped in a mortar and basil leaves). 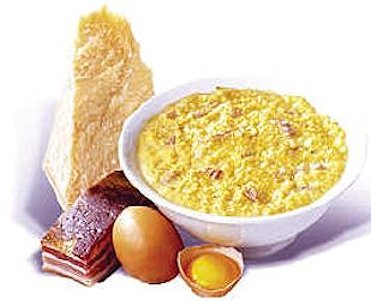 Left: The classic carbonara sauce combines with the pasta when mixed
right: The most famous oil-based "condimento": Pesto alla Genovese
Photos: A Tavola

The classic Carbonara sauce combines with the pasta when mixed

The most famous "condimento" based on oil: Pesto Alla Genovese
Both photos: A Tavola

A basic form of the condimento is actually a must for every pasta preparation: after the pasta has been drained, it should not be quenched, but spread out briefly and swirled with a little olive oil. This procedure should not take place on the stove, because the oil should not get too hot in order not to lose its taste and content.

What is the purpose of that? Firstly, the pasta does not stick and retains the properties of the fresh preparation longer; secondly, a good oil gives the pasta a very delicate, excellent taste.

A good reason why many Italians like to try their pasta without sauce, ie "in bianco". Thirdly, however, the oil also plays an important role in a healthy diet: as in the case of salad, the oil is the key to making the vitamins contained in the salad accessible to our metabolism.

As already mentioned, pasta should rather be enjoyed with vegetarian ingredients, and so the effect of the oil on salads also applies to pasta. Incidentally, there are many ways to enjoy vegetables with pasta in Italy that are completely unknown in this country - for example pasta with beans, peas or lentils.

Which sauce, which pasta?

One principle is: liquid sauce, long pasta. Thick sauce, short pasta. In fact, long, thin noodles such as spaghetti or spaghettini are better suited to absorbing liquid than penne or farfalle, for example. But there are short pasta shapes that seem to have only been created to accommodate large quantities of sauce, including fusilli or conchiglie. But here, too, the sauce really only sticks well when it is more bound than the classic tomato sauce. Short pasta is therefore more suitable for cheese sauces.

The further we get into typical Italian pasta preparation, the more solid ingredients play a role as pasta companions: salmon or tuna fillets, shrimp and clams, but also zucchini, eggplant, and finally meat and mushrooms.

The tagliatelle have proven to be the ideal companion here. In addition to long and short pasta, there is a third, more delicate group of pasta, which is usually served as an ingredient in soups or as a side dish for other dishes - the pastina. The most important sub-types of these three types of pasta can be found in the box on the right. 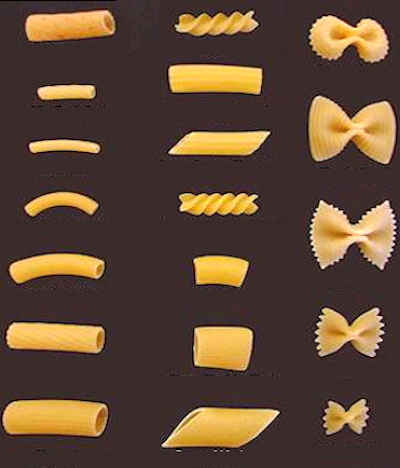 Left: some types of short pasta, right: Small pasta
Source: Wikimedia Commons
The over 300 types of pasta can be roughly divided into three main types with several subgroups, each of which is the basic pattern for many other variations. Here are the main varieties.

There is actually no room for cream in Italian pasta preparation. It only finds its way into the preparation of egg pasta, such as the "Tortellini pasticciati all panna". The use of cream in certain preparations remains controversial, as it is now often found among Italians in Germany, such as cheese and cream sauce or cream as an ingredient in carbonara sauce.

In fact, cream has the property of alienating the fine taste of pasta and is therefore frowned upon by purists. It looks a little different with cheese: the pecorino (sheep's cheese) as well as the Grana Padano and the Parmigiano-Reggiano go very well with the various condimenti - i.e. the oil-based sauces. Some cheese sauces have also become established, including "quattro formaggi" and Gorgonzola sauce.

For the eighth time in a row: