History of the Kashmir conflict: deadly ongoing dispute since 1947

India and Pakistan have been fighting for the Himalayan region of Kashmir since it was founded in 1947. And China is also involved. 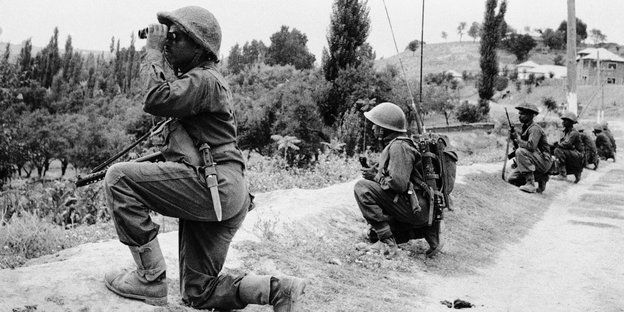 The conflict flares up again and again: Indian troops in Kashmir in 1965 Photo: picture alliance

With the independence of British India in 1947 and its bloody division into Hindu-dominated but secular India and Islamic Pakistan, a deadly ongoing dispute arose between the two new states over the Himalayan region of Kashmir. The Hindu maharajah of the Muslim-majority Kashmir decided under Pakistani pressure to belong to India.

Pakistan and some of the Kashmiri still refuse to accept that. Conversely, India has been rejecting a required referendum under UN supervision for decades, even though the government in Delhi had already agreed to it in the early phase of the conflict.

As early as 1947, with its support for Islamic rebels and later with its own soldiers, Pakistan tried to force Kashmir to join Pakistan by force. The oppressed maharajah then asked India for help, and war broke out. This eventually led to the division of the region along the armistice line ("Line of Control").

In 1965 there was a second war between the warring neighbors over Kashmir and since then there have been several armed conflicts below the threshold of a conventional war. The last time there were 500 to 600 deaths on the Indian side alone at the Battle of Kargil in 1999.

In India, Jammu and Kashmir is the only union state with a majority Muslim population. There was a strong movement for self-determination there in the 1950s. The autonomy granted to the region was repeatedly revoked by Delhi. Often - as is currently the case - Jammu and Kashmir are ruled directly by the central government from Delhi, which reinforces the feeling of an occupation there. 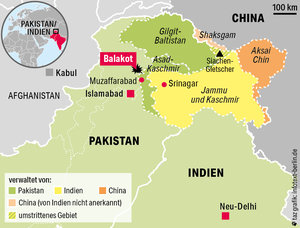 Islamist groups in the Indian part of Kashmir have been fighting armed for annexation to Pakistan since 1989. Islamabad sent Islamist fighters, who had previously fought the Soviets in Afghanistan and were no longer needed there, into the Kashmiri "liberation struggle" against India.

In Pakistan, the commitment to the liberation of Kashmir is part of the raison d'être. However, this does not mean that Kashmir would become independent, but that it would become unconditionally linked to Pakistan. Accordingly, the Pakistani part of the region is officially called "Azad Kashmir" ("Free Kashmir"), although it is not free and independent, but an integral part of Pakistan.

China also plays a role in the conflict

The dispute over the region is complicated by China. The People's Republic controls even the smallest part of the region. She is a close ally of Pakistan and a rival to India on a global scale. China has not only replaced the US as Pakistan's most important ally, but is also vying with India for supremacy in the region. In 1962 India lost a brief border war against China. In Kashmir, around 45,000 people have been killed in attacks by Islamist rebels such as the actions of the Indian security forces since 1988.

Pakistan has been trying for decades to put the conflict on the international agenda, with Islamabad fueling fears of a military escalation and thus mobilizing the world community. On the contrary, India is trying to prevent the conflict from internationalizing and sees Pakistan as the only culprit in the conflict. Delhi ignores the fact that it is only its brutal actions in Kashmir that turn many people against India.

The fact that India and Pakistan each successfully tested nuclear weapons in 1998 added another, more dangerous dimension to the conflict. Because at the latest since then, a dispute over Kashmir could lead to nuclear war. Pakistan is explicitly committed to a first strike doctrine. In doing so, it wants to deter India from conventional attacks and at the same time urge the world community to take on the conflict.