Who is Robin from Locksley

We run in circles with Robin von Locksley, because in this race we want to be the first to run twice for our tile display. Whoever manages this wins the race. You win if you go around the opponent's bard, but I've never been able to do that. Every step confronts us with a task to be completed. Sometimes we have to have a certain amount of gold, sometimes we have to sell certain loot, and so on. Uwe Rosenberg's 2 person race begins. The game was published by Wyrmgold and I'll be happy to tell you how I like it.

History? Get away from me! 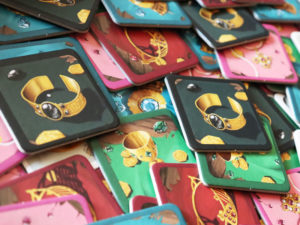 Oh please please please, may I start the scolding? Oh please. I promise it will get better and better towards the back and I will not scold you. I promise it. OK? May I? Super. Then get down to grumbling. Namely the story and the narration.

Dude, what a shit! I know that what I am writing here is not particularly constructive, but what is the point of this topic and the story? Age! Nothing at all. Robin Hood? Robin from Lockley? Our well-known forest thief who steals the rich and distributes them to the poor. Nothing with poverty here. We go hunting for prey, but everything is exchanged for pink and pink and it is ensured that your own bard makes his rounds. No, I really don't notice anything from Robin Hood in the game.

But is that bad? No, not at all, because I don't want to play Robin von Locksley because of the subject matter, but because of the mechanism. And I really like it. 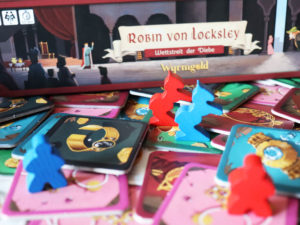 Robin from Locksley is a barter deal. We loot, exchange, spend gold, go on the hunt and so on. And that's just so that our bard gets on. Our glory tasks that we have to complete are displayed around the tiles. There are easier and more difficult tasks. The shuffling and the random display makes every game different. We place the tasks around the loot tiles and there are 25 tasks to be completed in one round. If you think you can't do a job, you pay one gold and start the next one. Several and different strategies lead to the goal: To collect loot with pinpoint accuracy, or to rake in a lot of money to get the bard to the front? It always depends.

Robin from Locksely is a planning game. One should have a good plan of how to proceed. Collecting loot that doesn't seem lucrative yet, but in 5 or 6 moves. Always look, which strategy is the opponent pursuing? Can I steal something, take it down, put stones in the way? Robin from Lockley can invite you to ponder at some point. Every move needs to be considered and thought through. Sometimes you're just lucky. Because the loot and the tokens of fame are great for yourself, and sometimes everything is so stupid that it makes you tear your hair.

The horse's back and forth 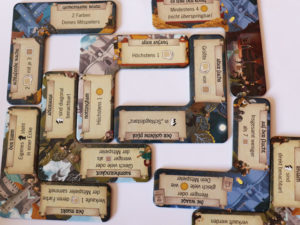 We move our robins, who are represented as horses in this game, like horses in chess. In doing so, we collect booty, which we amass or sell. Unfortunately, it sometimes happens that you can jump back and forth with your own horse and always collect the same loot tokens. This is unattractive and gives the collector an enormous advantage. The more loot we have of one kind, the greater the sale, the more you can pay your own bard to move. This is particularly annoying towards the end, when the opponent hisses past you and has “bought” the way. Unfortunately, this is a random weak point that can occur in the game.

But otherwise it is simply a pleasure to move the horse figure, to do tasks on the fame tokens and to plan the path.

Even if one of the victory conditions is to overtake the opponent's bard, this has never happened to me. How is that supposed to work? I would like to have a report here. I've never done this before.

Otherwise I can now get a lot of joy from the game. From game to game it got better and better.

My first game was okay. The second was okay too. The third game was great. The fourth was even more fun and so it went on and on. From game to game I got more and more joy from Robin von Locksley and now I really enjoy playing the game. A really great race and swap game, which only got me excited by playing over and over again. Robin von Locksley is a game that has only revealed more and more through playing over and over again, at least for me. Some games wear out after they have been played and played again. So not this game. I enjoy it more and more and I like it a lot. A really great 2 person game, which I love to play.