Why is the independence of the judiciary important

How independent is the German judiciary?

The German legal system distinguishes between two types: On the one hand, there is factual independence, it preserves the factual competence. Judges, for example, must not be influenced when passing court judgments, not even by superiors or colleagues, for example through official instructions or assessments of their work.

In addition, there is personal independence, according to which those judges appointed for life cannot be dismissed or transferred against their will. This is to prevent judges themselves from being subjected to arbitrariness that could affect their independence.

What influence does politics have?

But no system is perfect: In Germany, too, the neutrality of judges and their independence are questioned, criticized and challenged. Who can decide on the appointment and promotion of judges? "The appointment of judges in the federal states is strictly based on the grades," explains ARD legal expert Gigi Deppe. "But the question is, how much influence does politics have in promoting judges?"

People's representatives have a say

But political participation also makes sense, explains the legal expert. "Even among critical lawyers, the election of federal judges is not completely demonized," she says. "It can have its good sides when the parliament has a say." Otherwise there is a risk that the composition of the courts will not reflect the opinion of the population enough. 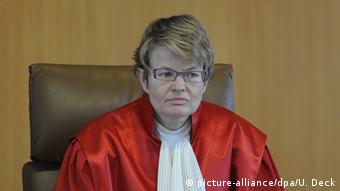 Whoever wants to become a judge doesn't just have to be a good lawyer. "The inner attitude of the judges is probably much more important," says Deppe. According to the Basic Law, judges must also decide on the basis of the legislation if it does not correspond to their own legal opinion. Worldview can play a role here. "It depends on whether you perhaps grew up under similar circumstances, whether you know each other and whether the lawyers then perhaps understand the attitude of the ruling politicians," says Deppe.

According to the expert, there is no open influence: "On this point, judges in Germany are very self-confident and do not put up with it." On the other hand, such behavior is frowned upon: "If, as an exception, politicians responsible have commented on current court proceedings in the past, then it has backfired," says Deppe. "The politician was later discussed disparagingly."

The limits of independence

"Nemo iudex in sua causa" - nobody is a judge in their own case, is an old legal principle. But are judges the exception as part of the legal system? They interpret and judge how the law can and may be understood - and also judge the actions of their colleagues. Some take a critical view of this, but here, too, judges are not entirely inviolable.

An internal service supervisor controls the work of judges, it also handles complaints against judges. Judges can be prosecuted for perversion of the law if they misinterpret the law and harm others in the process. Judges can also be dismissed or transferred as part of judicial disciplinary proceedings. Sometimes a judge cannot find a way to reach a balanced judgment. Then they can withdraw from proceedings themselves for reasons of bias, but plaintiffs or defendants can also plead for it.

Despite all internal control mechanisms, the German judiciary is a closed system. Does that make them prone to abuse? "Fortunately, that's not the case," says Deppe. "We have two European courts that often review German court decisions." As a member of the European Community, Germany also recognizes the case law of the EU Supreme Court in Luxembourg (ECJ) and the European Court of Human Rights in Strasbourg (ECHR). "Sometimes the result is quite different," says Deppe.

A deportation ruling by German courts before the ECHR was only recently stopped because the Strasbourg court saw issues relating to the European Convention on Human Rights inadequately clarified. "It turns out that the whole thing is being examined again from a different point of view," says Deppe.